THE BEST OF DON MCCASLIN"S WARMTH 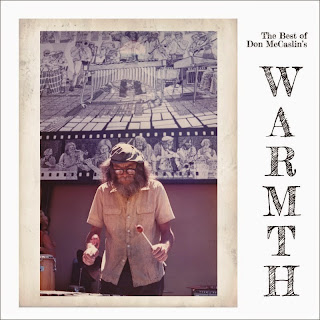 ++$1000 AND MORE++ULTRA RARE++SOUGHT AFTER! The reason why labels work so hard to track down musicians to re-issue their privately released music is normally because the original records are very hard to find and very expensive. Demand within the 'collectors scene' is crucial. So what do we have here?

None of the adjectives mentioned above apply for the albums of Don McCaslin's Warmth. Born in Tacoma Washington in 1926, Don moved to the San Jose area during the first year of life. He took a few piano lessons as a child, but it was boogie woogie music that really inspired him. While attending San Jose State he formed a band which had piano, guitar, vibes, bass and drums. Following his graduation from college, Don played music on the weekends and worked as a high school English teacher for fifteen years. Then in 1970 he quit his teaching job and moved to Santa Cruz, making music his main pursuit. In 1971 he was invited to bring a jazz combo to play at a political rally. The event took place in the patio of the 19th century courthouse building, now called the Cooper House. The owner told Don that he was putting a sidewalk cafe there and invited him to play on opening day. Don ended up playing there until the 1989 earthquake ruined the beautiful old building.

Don and his fellow musicians were forced to move to the Warf House, a restaurant situated at the tip of the Capitola pier, and played there for 20 years. Today you can find Don's band The Amazing Jazz Geezers play at Severino's Lounge in Aptos, California. The Geezers are not necessarily "amazing" because of their musicianship. To become an "Amazing Jazz Geezer" one must merely be over 75 years of age, know over 1000 tunes written between 1935 and 1950, and still be able to play a full gig.

Regardless of rarity and demand, for Don McCaslin the time has come for representation and appreciation. Neither of Warmth original albums are considered to be sought after nor they sell for big money. Until now.