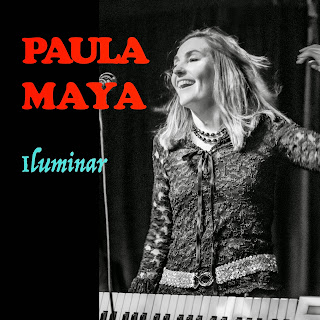 Austin-based keyboardist and singer and songwriter Paula Maya is back with her sixth studio album, Iluminar, now released worldwide.  The new album is heavily influenced by her Brazilian roots, just as much as her home base of Austin, TX.  Iluminar is Paula’s first album sung predominately in Portuguese (90%) and focused on Brazilian music, jazz, and world inspired rhythms such as African soukous and Latin beats versus her previous releases, which featured a mix of pop, rock, classical and electronica.

Paula is originally from Rio de Janeiro, the birthplace of bossa nova and songs such as Girl from Ipanema. Rio is also where choro, a Brazilian be-bop-like music, was born a century before bossa nova. Both music styles, as well as Brazilian dance music like samba and baião, are heard in Paula's songs. Another strong influence is the eclectic community of musicians from different parts of the world that Paula is a part of, in Austin TX and in Seattle, where she used to live. Different genres such as jazz, country, reggae and soukous inspire fresh music blends.

Although the album took the entire 2014-year to record, mix, and master, it’s really been Paula’s lifelong journey that took her to this point.  Paula relocated from Brazil to the US in 1993 where she lived briefly in Houston before making Seattle her home for the next 17 years.  In 2011 after living in Enfield, CT to record an album during one of the coldest Northeast winters, she came to Austin for SXSW and fell in love, both with the city and her partner.  She went back to Rio de Janeiro to visit her old friends and family, but cut her stay short to return to Austin.  During that short visit, Paula re-connected with her Brazilian roots at a deeper level than ever before and she brought that inspiration back to Austin to perform and record.  Her new rooted sound was quickly well received (Paula was voted in the top 10 World Music Bands of 2014-2015 by the Austin Chronicle Music Poll) and was a refreshing change from her previous albums of avant garde instrumentals, classical music, pop and rock, that she recorded living in Houston and Seattle.

lluminar, which means ‘To Shine’ in Portuguese, features eight songs; seven originals and one traditional bossa nova.  The album title is taken from the first song 'Iluminar Você' which is a soukous (African rhythm) inspired song written in Portuguese about flying to Rio de Janeiro, to see her old friends and family.  'Baião de Cabo Frio' is a baião (Brazilian rhythm from the North East of Brazil). Inspired by this magical place called Cabo Frio, which is a cape in the state of RJ stretching east into the ocean. Havind deep seeded roots in this area, Paula wrote this song to honor the wonderful experiences from her childhood.  'Tarde em Itapoã' is a traditional bossa nova written by Toquinho and Vinícius de Moraes.  'The Rain' is another soukous inspired song, written in English. It's a love song for Austin, Paula’s new home and love.  'Queria te Encontrar,’ which means 'I'd love to find you,’ is a bolero / samba canção song. A love song about longing to find someone you’ve loved and lost.  'Julia' is an instrumental tune Paula wrote for her niece. It features two rhythms: Latin jazz and samba, happening back and forth through out the piece.  ‘So In Tune' is a bi-lingual pop song with a hint of reggae. It’s about a broken heart. A girl telling the guy she is in love with that he is clueless about matters of the heart.  The album concludes with 'Menina Bonita,' which is another baião. It's about a couple from a fishing village in Brazil who are in love.

Iluminar is deeply inspired by Brazil, but is also the first album completely recorded, mixed, mastered and duplicated in Austin.  It was recorded at her record label studio – Yellow House Records based in South Austin with Lefty and Robert Wyatt, mastered by Nick Landis at Terra Nova, and manufactured by Matt Eskey’s Any and All Media.  Paula enthusiastically states, “I am so proud my new CD Iluminar is completely done in Austin.


Her new album will be showcased during her hometown record release party on May 7, 2014 at the One-2-One Bar in Austin, TX.  Then Paula embarks on a Brazilian tour in late May before returning back to the US to tour stateside.