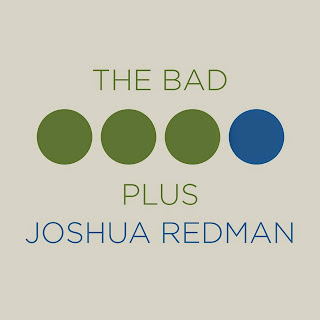 THE BAD PLUS / JOSHUA REDMAN

In 2011, The Bad Plus invited saxophonist Joshua Redman to join them for a week of enthusiastically received performances at the Blue Note in New York City. They then played a handful of dates before heading into the studio in 2014 to record their debut album, The Bad Plus Joshua Redman, which Nonesuch releases on May 26, 2015. Seven of the nine tracks on The Bad Plus Joshua Redman are new compositions by the quartet members who, in addition to Reid Anderson and Redman, include The Bad Plus pianist Ethan Iverson and drummer David King. The other two songs on the album, "Dirty Blonde" and "Silence Is the Question," are new arrangements of Bad Plus favorites. Of a recent show in Great Barrington, MA, Albany’sMetrolandsaid, "The newly christened Bad Plus Joshua Redman took the stage … and proceeded to raise the roof. In a word, the music the quartet produces is sublime. More than that, it's as though Redman is the long-lost fourth member of the group, just waiting to be snapped snugly into place." "On the live gigs, Josh plays magnificent, long tenor solos which are very much in the jazz tradition," said Iverson. "That’s obviously not the focus when we play as The Bad Plus. It’s fun to for us to enjoy that extended blowing territory, especially with someone as great as Josh. On the album, however, there is still a focus on composition." ~ Amazon 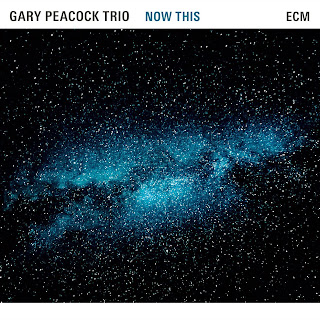 Featuring: Marc Copland: piano; Gary Peacock: double bass; Joey Baron: drums.
In the realm of the piano trio the bar is set high, and creative bassist Gary Peacock has helped raise it in the groups of Bill Evans, Paul Bley and Keith Jarrett. Now This is an album with the bassists current trio, recorded last summer in Oslo. Powerful new versions of some Peacock classics such as Moor, Vignette, Requiem and Gaya are interspersed with recent compositions. Marc Copland and Joey Baron each contribute tunes, and the group also tackles Scott La Faros Glorias Step. In this band, roles are very evenly shared, and this is an optimum context in which to appreciate the melodic invention of Peacocks bass playing. Marc Copland always honors the needs of the compositions and Joey Baron supplies both drive and sensitive detail. Now This is issued in celebration of Gary Peacocks 80th birthday on May 12th. Recorded July 12-14, 2014 at Rainbow Studio, Oslo. Recording and mix engineer: Jan Erik Kongshaug, produced by Manfred Eicher. ~ Amazon 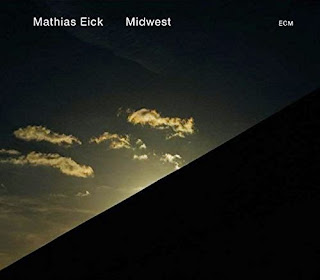 Mathias Eick reflects on distances travelled in this intensely melodic set of original compositions, which makes an imaginative journey from Hem, the tiny Norwegian village where the trumpeter grew up, to the vast plains of Dakota in the American Midwest. It was to the Midwest that hundreds of thousands of Norwegians traveled by sea in the 19th and early 20th centuries - and naturally they took their music with them. In similar spirit Eick, a Norwegian improviser-composer strongly influenced by North American jazz, here reintegrates some of the colors and textures of his native folk music in these newly-created pieces. In the front line of the line-up featured here he is partnered by the brilliant violinist Gjermund Larsen, whose roots are in the Norwegian folk tradition. Trumpet and violin exchange lines and soar together above a brilliant rhythm section with Jon Balke at his most lyrical, Helge Norbakken periodically finding pulses that can suggest tribal drumming or buffalo hooves, and the resourceful Mats Eilertsen helping to drive the music forward. The original inspiration for the album was sparked by a grueling North American tour: I d been out on the road for a long time and was feeling homesick. Then we reached the area called the Midwest and I suddenly felt as if I was home. I had a sense of why the early settlers would want to build their farms there. It reminded me very much of parts of Norway. Recorded May 11-13, 2014 at Rainbow Studio, Oslo. Recording engineer: Jan Erik Kongshaug. produced by Manfred Eicher. ~ Amazon