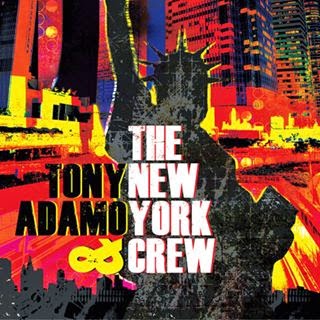 True hipness is a most elusive substance, consistently pursued, often pretended and rarely captured. But make no mistake, Tony Adamo is HIP (capital letters demanded) in full evidence on his new Urbanzone Records album Tony Adamo & The New York Crew. Now we’re not talking about some snap-brim fedora, hipster chic, cool attitude take on hipness – but the real deal. We’re talking about Miles, Monk and Sonny trading fours after hours at the Five Spot, with Frank and Dino knocking back Jack on the rocks while Kerouac, Ferlinghetti, Lord Buckley and Lenny Bruce riff on the world’s absurdity – that kind of hip.

On this knockout album, Tony and his Crew deliver what is essentially eleven short films, each one painting a stunningly visual portrait of a fascinating world and some of its most captivating and compelling denizens. Driven on a soundtrack of explosively spirited and utterly delightful music, the spectacularly imaginative screenplay is depicted through a prism that Tony calls Vocal/HipSpokenWord.

Rooted in a style that goes back to Fats Waller through the beat poets, Jean Shepard’s work with Mingus on The Clown, then maturing with the seminal hip-hop roots of Gil-Scott Heron and The Last Poets, and ripened by Chuck D with Public Enemy, Tony has mastered that entire vernacular to portray his vividly expressive landscapes.

In most cases the musicians on vocal albums are relegated to creating the contexts for the vocalist to shine, but Tony Adamo & The New York Crew is an ensemble in the truest sense of the jazz tradition. While their participation is fully dedicated to Tony’s vision, the only way that vision could be realized would be for each of them to own the music and make it theirs – which they do at every moment throughout this extraordinary recording.

Much of the group from Tony’s previous album – the heavily acclaimed Miles of Blu – are present for this one: Michael Wolff on piano, Richie Goods on bass, Tim Ouimette on trumpet, Mike Clark on drums and Bill Summers on percussion – augmented by the alto sax giant Donald Harrison. Renowned Return to Forever alumni Lenny White (who also engineered the mixing) brings his drum mastery to one track and Jean C. Santalis adds his guitar wizardry to another.

Ouimette, who spent many years with the immortal Ray Charles, provided the marvelous arrangements; and Clark, whose eminent career has blossomed from his original membership in Herbie Hancock’s Headhunters, produced the album – the second time he has done so for Tony. All of the lyrics are by Adamo and he and Clark co-composed all ten originals, joined by Ouimette on seven, Wolff on two and Harrison on one.

While Adamo’s vocals do not dominate the time frame – allowing plenty of room for the ensemble to explore and express – they are the heart and soul of this album. Occasionally singing, but mostly verbalizing in his mellifluously potent and impeccably rhythmic baritone, Tony jabs and feints like Muhammad Ali, masters time like Elvin Jones, phrases with the emphatic gospel fervor of Gene Ammons and preaches Truth like John Lee Hooker amplified by the vehement fire of Chuck D – all blended into the singular form of expression that is uniquely Tony Adamo.

The musicianship throughout is outstanding on every level – fiery, energetic, impassioned, enthusiastic, inventive and absolutely flawless in execution. The rhythm section is rooted by the deeply resonant and deliciously funky bass of Goods, buoyed by the splendid rhythmic vitality of Clark and driven by the boldly inspired virtuosity of Wolff, who also turns in some sensational solos. Ouimette’s fluidly articulate and dynamic trumpet blends perfectly with Harrison’s virile and soulful alto, blowing mightily on Tim’s arrangements and both delivering consistently brilliant solos.

The anthology of stories told on this album includes portraits of characters from the legendary to the obscure, and delves into broader concepts ranging from soulful food to Buddhism to Tony’s native New York City – which is actually a featured player throughout this entire movie.

The album opens with a portrait of the under-recognized trumpeter Eddie Gale, whose sixties cult classic Ghetto Music took Donald Byrd’s A New Perspective into the roots of the hip-hop movement. An audacious blend of rollicking horns, rip-roaring vocal, scorching alto and percussive piano culminate in an incandescent Lenny White solo over ostinato piano.

Other portraits include General T, a soulfully poignant rumination on the legendary Village Vanguard and a unique gentleman who hung heavy there; a playful sketch of the immortal Pablo Picasso as an avant-garde trumpeter on Picasso At Midnite colored by Ouimette’s coloration and Clark’s sizzle; and a blistering drawing of a mysterious figure embellished by articulately simmering harmon-muted trumpet on Wisdom of Oz.

Giants of jazz get their turn as well. Eddie Harris is remembered on Listen Here Listen Up, a deliciously funky and sanctified extension of Eddie’s classic original, with a deeply grooved Harrison solo and with Tony and Wolff distinctively giving Les McCann his props as well. Art Blakey and his notorious Jazz Messengers get their due on Messengers Burnin, a nicely syncopated sizzler in pure Blakey mode cooking in Bu’s signature uncomplicated 4/4 drive that swings like a mutha. A short nod to Bird and Diz on To Bop or Not to Be is a succinct and delectable instrumental trio of alto, muted trumpet and drums.

More abstract themes are explored on You Gotta B Fly, a straightforward mid-tempo jaunt with Tony singing from the Eddie Jefferson angle before launching into his rap, Santalis plucking some gutty twang in his short solo, and all stoked by Summers’ sparkling percussion. Summers’ congas also put the burn under Mama’s Meat Pies, a straight-up swinger with rollicking piano, a vibrantly woody bass solo, burning alto and an alto/muted trumpet duet that touches on some of that Ornette/Don Cherry special brand of swing.

Tony Adamo & The New York Crew is not only a breath of fresh or in today’s musical world, it’s an entirely new atmosphere that will refresh and uplift the head, the heart and the soul.

“I would hope that my Vocal/HipSpokenWord story telling reaches across a wide music spectrum to hip old and new generations alike to my new genre of music. My music producer, Mike Clark gathered some of the greatest musicians in New York to bring my music and lyrics alive. Tony Adamo & The New York Crew CD is a labor of love.”

Yo Jazz Chill, A mighty hip blastin' thank you for reviewn'Tony Adamo & The New York Crew. B hip, B happy.
Tony Adamo