INTRUMENTS is full of groove – without any beats: Henrik Schwarz‘s music in an acoustic arrangement for chamber orchestra 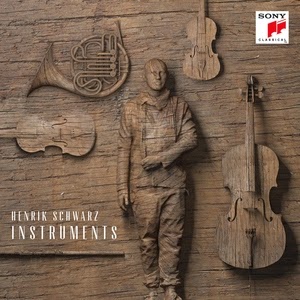 "What's left of my music if I have it played by Classical musicians and omit the most important element, the beats?" This question was the starting point for INSTRUMENTS, the new Henrik Schwarz album. Four years have passed now since the Berlin musician and producer was first invited to have a selection of his House tracks played by an orchestra. Now the Tokyo Secret Orchestra has recorded seven pieces arranged for chamber orchestra that are reminiscent of the minimalism of Steve Reich and Michael Nyman not least in their poetry and magnetic pull. In between times, a piece like "In Björndal" with its shimmering instrumental colours even takes us back to the fin de siècle and the music of Schönberg.

The last ten years have seen quite a few Classical performances of electronic club music. But many of these were in the "classic rock" tradition of the 1970's, when symphony orchestras played the big pop hits of the day. "In most cases, electronic beats were then mixed into the orchestral arrangements, but I always found that a bit half-hearted", says Schwarz. He wasn't interested in so-called Crossover; what interested him was what happens when club music is transferred to a body of Classical instruments. "I wanted to see whether this music still means anything when you take away all the synthetic sounds and the beats." This prompted Henrik Schwarz to experiment with the scores, working together with arranger Johannes Brecht and various ensembles, without any computer sounds or acoustic percussion instruments that supply a rhythm in 4/4 time.

For more than a decade now Henrik Schwarz, 42, has been one of the best-respected House producers and a sought-after remixer, e.g. for Mary J. Blige, Ane Brun and Coldplay, with his music appearing on labels like Innervisions, !K7 and Sunday Music. In recent years, he has worked on an increasing number of cross-genre projects: Schwarz wrote the music for a silent film and worked together with the Berlin State Ballet and painter Norbert Bisky; he makes music together with leading jazzmen Bugge Wesseltoft and Dan Berglund, and gives concerts with pianist Nik Bärtsch. The arrangements on INSTRUMENTS have been performed in the last few years by different orchestras in some of Europe's best-known concert venues, such as Berlin's Kammermusiksaal, the Amsterdam Concertgebouw or the Tonhalle in Zurich. And the audience was delighted in every case. "An elegant, dynamic, unprecedented combination of Classical instruments and an Afro-American groove that doesn't seem superimposed, but is actually in the molecules of this music" – thus critic Florian Sievers in "Groove Magazin".

The breakthough came for Henrik Schwarz personally with a performance given by 27 young Japanese musicians under conductor Emi Akiyama: they appeared in a Buddhist temple in 2013 under the name Tokyo Secret Orchestra. "Suddenly I heard my own music with different ears. Classical music makes completely different demands on the players from a House track. In House music it's the precision timing that creates the groove, but an orchestra is not used to playing like a machine. In Tokyo, though, I had the feeling that the musicians managed to penetrate to the music's core."

The recordings made in Japan supplied the source material for the album INSTRUMENTS. Seven pieces are rearranged here for Classical instruments, from Henrik Schwarz's club hit "Walk Music" (which he used in the new arrangement as an opener for his live sets for a long time) through "Wamims", the version of a 2006 remix, to the only piece on the record that is new and previously unreleased: "In Björndal".

All the pieces have been arranged for the obligatory body of strings (violins, violas, cellos and double bass, and the strings are joined by low woodwind (bass flute, bass clarinet and bassoon) that not only supply individual timbres. In addition, similar to the percussion instruments (the vibraphone among them), they are also a source of rhythm. In this context, the focus is on the magic and the magnetic power of minimalism, something that American composer Steve Reich used to influence the pop and techno scene with his cleverly interlocking rhythmic chains.

Right at the outset of "Walk Music", we are offered a magical combination of single, lyrical notes from the strings and mysterious vibraphone figures in the background. And the following track, "Marvin", literally sprouts from a single note that is constantly repeated. Here, the bass flute, the viola and the cello evolve a rhythmic energy whose slightly burlesque tone is initially reminiscent of the Neo-Classicism of Stravinsky – at least until the orchestra strikes up a groove in several parts.

Nor is this by any means the only reference to the great Classical masters: inconspicuous reminiscences of this kind are cunningly sprinkled in at liberty. The piece "In Björndal" radiates a curious and seductive melancholy magic that could almost be a tribute to Arnold Schönberg and his prismatic style. Another example: arranger Johannes Brecht added to the ensemble for "Leave My Head Alone Brain" a bassett horn, a member of the clarinet family that Mozart was particularly fond of. And in "I Exist Because Of You" the cello sometimes plays the so-called 'Bartók pizzicati' that go back to the Hungarian composer: the cellist twangs the string and then lets it spring back against the fingerboard.


The harmonies and sounds of the original tracks are played here by the strings and also a number of woodwind instruments, among which the bass clarinet has the starring role. Time and time again, production techniques from electronic music such as loops or low-cuts are transformed into orchestral arrangements, with frequencies being muffled over the space of several bars (e.g. in "Leave My Head Alone Brain Seven"). The result is a new kind of music played on Classical instruments. a music that doesn't deny its roots in the club world and could only be created on the computer; a music that manages to transport the energy of electronic dance music to the Classical concert hall – with the bass drum only present in the listener's head.