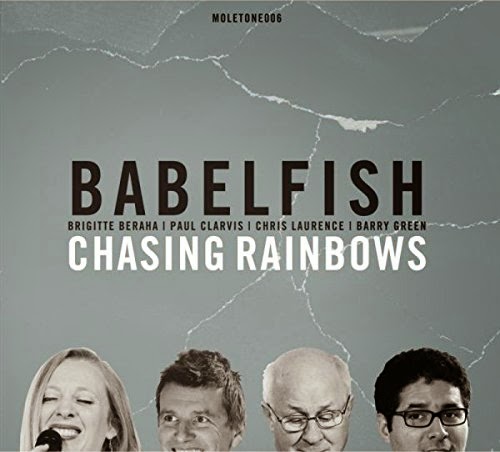 Chasing Rainbows, the second album from Babelfish, has all of the understated musical virtues which were appreciated in the group's first album in 2012. Here again, the listener will find proof that musical strength has nothing whatsoever to do with high volume. It is very well known in UK jazz circles quite what a technically accomplished vocalist Brigitte Beraha, and she proves that again here. But what has also happened is a deepening of the emotional content.

It is not just subtle musical half-lights which are caught on the wing and are there to be enjoyed, every song here is alive with flickering emotions, impulses and questions. (Sebastian Scotney, March 2015) Brigitte Beraha writes about Chasing Rainbows: "This album is about love, the cycles and stages of relationships, just love in many different forms (including love for sushi!). When singing with words, I try to keep those simple, and yet not necessarily obvious in their meaning, and to do more with emotions, senses rather than words.

That's how I live, really." A collaboration between two of the UK's finest jazz artists Barry Green (piano) and Brigitte Beraha (voice), the band also features legends Chris Laurence (double bass) and Paul Clarvis (percussion). Between them they have played and recorded with Kenny Wheeler, John Surman, Sarah Vaughan, Norma Winstone, Peter Gabriel, Stevie Wonder, Lee Konitz and many more. Their debut album Babelfish received rave reviews and was picked by Sebastian Scotney, founder of LondonJazz, as his top album of 2012.

Their second album " Chasing Rainbows" is out in April, a new collection of music they love,regardless of where it comes from - Songs in English, French, Portuguese and Italian, from original songs about love to fast paced compositions about sushi; from free Jazz to their take on Contemporary classical songs, each Babelfish performance is fearless, fresh and mesmerising. "These gracious and wonderfully talented musicians delivered an exciting and unusual combination of music...

The visible joy of this band working together on stage was transferred to the audience." LondonJazz "Babelfish are a definition of a contemporary jazz class act." John Fordham, The Guardian "Brigitte should already be up there with the stars. She has a tremendous future to explore, one which we'll be watching with great expectations". Dame Cleo Laine and Sir John Dankworth CBE "Brigitte's voice and writing have truly matured to another soaring level" Rufus Reid / Amazon