NOACCORDION - Wake Up and Mentals, Explores the Intersection of Hip-hop, Electronica and Classical Songwriting Forms 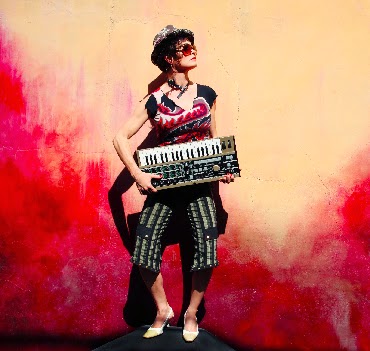 Onah Indigo is a woman warrior, producer, songwriter and performer who isn’t afraid to face an audience armed with only her accordion, Bella, and a heart full of song. The music she makes as noaccordion blends hints of classical, folk, downtempo, trap, crunk, glitch hop, drum ‘n’ bass, electro swing and house, but Indigo puts her own singular spin on the dizzying, electronic storm she creates with her jazzy vocals and lively accordion vamps.

“Since I’ve been playing accordion, everybody loves me,” Indigo says. “The instrument reminds them of their cultural heritage, especially if they’re from Europe. Something about the accordion makes people smile. They call me The Accordion Lady, even though a lot of the songs I create don’t have any accordion on them.”

On stage, Indigo is a colorful whirlwind of music and motion, incorporating elements of cabaret, circus-like antics and uplifting, transformational lyrics. “I call it Sacred Irreverence, a conscious choice to embrace the dark and the light, the positive and negative, the yin and the yang. Our current situation demands a shift in consciousness that will rebalance our relationship with other people, our planet, our universe and ourselves.”

Since starting the noaccordion project, Indigo has released three EPs. 2010’s Noaccordion, produced by Sean Ingoldsby, with a sound that suggests the B52s playing with Portishead; 2013’s Almostallaccordion, a collection that featured Latin percussion, gypsy music, hip-hop, punk, tango, electronic beats and guest artists and 2014’s Community, a mash up of vocal effects, peculiar harmonies, local MCs and elements of EDM. On her new EPs, Wake Up and Mentals, she continues to explore new directions as a producer, songwriter and singer.

“I’ve been an artist, painter, sculptor, musician and songwriter since I was a girl. I’ve trained as a classical pianist and jazz vocalist and play Latin percussion, but the music really took off after I discovered the accordion. I sat next to Sean when he was producing my first EP and really paid attention. After Noaccordion, I got some good mikes and pre-amps and started doing it all myself. I like collaborating, so on Almostallaccordion, I worked with percussionist Evan Fraser, beatboxer Mastahlock, trumpet player Danny Cao, electronic producer Abai and MCs Taj Angelo and Chatter, who also joined me on Community.

“For the new EPs, I used Ableton Live as my main DAW (digital audio workstation) and got better at looping, sampling, engineering and editing. I made all of the sounds and played most of the instruments on Wake Up and Mentals – percussion, keys, accordion – live in my studio. Cello Joe (Dirtwire, Beats Antique) helped out on cello and Taj Angelo added harmonies to one song.”

The centerpiece of Wake Up is “MFLS (Mutha Fuckin Love Song),” a vibrant blend of pop, hip-hop and electro that rides a simple bass line, punctuated with playful keyboard effects. The lyrics are sexually positive and uplifting, while Indigo’s singing is strong and confident, without any hint of coyness. “MFLS” is the second noaccordion video. It was written, produced and directed by Indigo and the Belgian video artist Oliver de Lantsheere.

“Never Grow Up” is a conscious hip-hop track that praises the child-like joys of creativity. A mellow piano track supports the vocals of Indigo and Taj Angelo, an Oakland singer and producer who adds his soulful harmonies to the proceedings. “We use our a cappella-like moments to frame my white girl rapping,” Indigo says with a smile. Sci-fi keyboards and spacey background textures create a huge sonic space for “Give it All Away,” an impressive mash up of electro, dub step, synth pop and 90s dance music that urges listeners to pare their lives down to the essentials. It’s a prayer for sustainability in a time of massive overconsumption. “If we give all of our unnecessary belongings away, we’d have room for the things that would help us regain our balance in the world.” The EP also includes the dark, subliminal funk of “You Caught Me,” the jittery call to arms “Wake Up” and “Mama Nature,” a buoyant house track that actually features the accordion.

The Mentals EP is more contemplative, with a classical flair in the melodies and improvisations. “These songs were inspired by Eric Satie’s Gymnopédies and Gnossiennes,” Indigo says. “Some are abstract and only use Satie as a guideline, some are easily recognizable. This is as close as I’ve gotten to playing a cover.” Stand out tracks are “Gnoss,” based on “Gnossiene #1,” with the familiar melody played on glockenspiel-like keys against a background of warm, synthesizer effects and “Canter,” which uses accordion and loops of hands clapping for a contemplative take on the changes of “Gymnopedie #2.”

“Music is my form of meditation, my religious practice. It’s how I process my emotions. The Bay Area has a large musical community and I want to continue to collaborate with visual artists, video makers and other writers and performers to create my own self-governing, non-violent economy.”