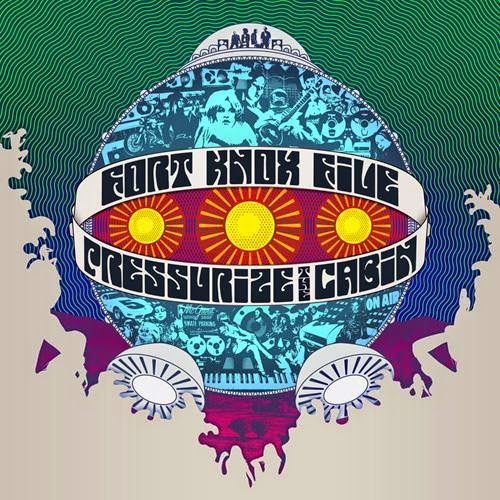 Unbuckle your seatbelt. Keep the tray-table down. Dance in the aisle. It’s time to Pressurize The Cabin with Fort Knox Five, but there’s no way you’re sitting still. To create their latest album, Fort Knox Five—based in Washington, DC—has flown all over the globe, from the Shambhala Music Festival in British Columbia to the Volt Festival in Hungary to the Red Rocks Amphitheatre in Colorado. Across 5 continents and 30 countries, they’ve formed deep musical relationships with some of their favorite vocalists and musicians, some of whom are featured on Pressurize the Cabin.

San Diego’s Vokab Kompany is featured on the title track, which captures the upbeat, all-night-party vibe of the album. Legendary British trombonist and soul crooner Ashley Slater takes it back with a retro electro-swing groove, Fire In My Belly. The nonstop party continues with Ready Go, featuring Raashan Ahmad from Oakland’s Crown City Rockers, delivering a fresh true-school hip-hop sound. Sleepy Wonder from Thievery Corporation delivers his signature rapid-fire dancehall ska on 24 Hours To Set It Off.

Mustafa Akbar, a longtime friend of Fort Knox Five, is featured on two electro-funk tracks that will be lighting up dance floors worldwide, Whatcha Gonna Do and Keep it Poppin. Another DC favorite, Flex Mathews, is also featured on two tracks; his party-rocking lyrics are a perfect fit with the Fort Knox Five funk. Frankie Rosado and Felix Perez of the Empresarios can be heard on the anthemic Latin funk track Cinco To The Brinco. Rounding out the album is Mission to the Sitars, an instrumental track featuring Fort Knox Five’s own Rob ‘RPM3’ Myers — his sitar and guitar work have also been highlighted by Thievery Corporation and See-I.

Pressurize the Cabin is a true follow-up to 2008’s Radio Free DC. The earlier album focused on some of DC’s amazing vocalists and musicians, while Pressurize the Cabin has a global scope. Funk is the common denominator, tying it all together, but the grooves on this exciting new artist album range from Hip-Hop to Disco to Electro to Latin. So get on board and prepare for takeoff!

Fort Knox Recordings is the renegade funk n’ soul label from Washington DC. Established in 2003, our mission is to explore the funkier side of global music. Fort Knox is set to ‘Tell It Like It Is’ by smashing the artificial barriers established by the ‘System’ that keeps all ‘Good’ music down. Forget about tempos and genres – we want to take you back to the roots and reunite all music from our funk, dub and soul brothers – you dig? So stop being so serious, this is music, it’s supposed to be fun.