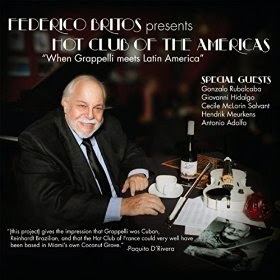 I don’t know anyone who doesn’t like Federico Britos, a musician so versatile and charismatic that he’ll get called for a dance, an operetta, a cocktail party or simply to have a drink in his endearing company; to chat in some Miami café. It’s that the legendary Uruguayan violinist speaks like he plays, and plays with the same ease and freedom as when he’s fascinating us one of his many anecdotes from his long and varied musical career........ I met Federico in that problematic and feverish Habana of the 60’s, where apart from his work with the Opera and Ballet orchestras led by Felix Guerrero, he organized a trio with his compatriot bassist Federico Garcia Vigil, who in that particular group played the guitar and sang in Portuguese. On bass they had an American mulato, enigmatic and painteresque, named Mario Lagarde who had arrived in Cuba around the same time as Chicago saxophonist Eddie Torriente. People called the trio “Los Federicos”, and in an era of confusion and absolute disinformation, where our country did not have access to recordings of any kind, it was through this band that Cuban musicians, who only knew of the Bossa Nova through references, heard for the first time the marvelous composistions of Bonfá, Jobim, Vinicius de Moraes, João Gilberto and Roberto Menescal. It can be said that in some way, “Los Federicos” played a significant role in the unconditional love that some of my contemporaries have felt for brazilian music since then.

As Bebo Valdés would have had said: “De allá pa’cá mucho ha llovido” (heretofore there’s been much rain) and from those days to now, that popular Montevidean musician has been performing chamber music, commercial sessions and international tours with the great Cachao, even playing in Jazz clubs, symphonic concerts and recordings with Charlie Haden amongst other artists of the most diverce musical styles. But above all of these activities, Federico the Uruguayan (as we’ve always affectionately called him) felt a particular devotion to Django Reinhardt, Stephane Grappelli and The Hot Club of France. This CD is an original form of tribute to the music of that era and it’s most significant composers. I say “an original form of tribute,” due to the fact that the art of the sounds isn’t just notes, but how those notes are played, and obviously, in this project, this extremely well known music, frequently revisited throughout the world, is treated in a very particular and unique way. Duke Ellington, on many occasions, spoke of how a good arrangement is like a re-composition, and this is precisely the case concerning Hugo Sánchez and Jaui Schneider, as their arrangements, coupled with the exquisite interpretation of the participating musicians, gives the impression that Grappelli was Cuban, Reinhardt Brazilian, and that the Hot Club of France could very well have been based in Miami’s own Coconut Grove. Bravo Federico!