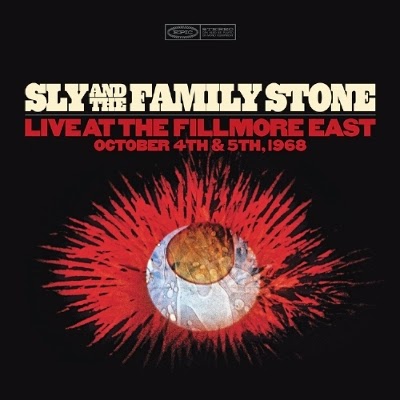 Epic/Legacy has announced the debut release of SLY & THE FAMILY STONE—LIVE AT THE FILLMORE EAST OCTOBER 4th & 5th 1968, a four-disc set of previously unreleased live shows recorded during the band's rise at New York City's legendary venue. The set is scheduled to be released on Friday, July 17.

Sly & The Family Stone's reputation as one of the most influential bands of the 1960s has rarely been in denial. The group effortlessly combined upbeat, funky melodies with socially conscious lyrics, which would paint a vivid picture of the sociopolitical landscape of the '60s while also creating a road map for pop music in the decades to come. This four-disc anthology presents a lesser-known side of the band: not the dominant soul-funk-pop juggernaut of the late 1960s, but an up-and-coming ensemble whose onstage energy could not be contained.

On October 4th and 5th, 1968, shortly after the release of the band's third album Life, Sly & The Family Stone took the stage at Bill Graham's legendary Fillmore East in New York City. Along with the success of Dance To The Music, which was released earlier that year and spun off the Top 10 hit of the same name, Sly & The Family Stone were making a name for themselves on the concert circuit, with their dynamic, high energy live performances.

Epic Records, the group's record company, recorded all four of these concerts (two shows per night) with plans to release a live album that would consist of selections from these performances. But the release was shelved after the release of the single "Everyday People," which topped the Billboard Hot 100 in 1969 and anticipated the band's breakthrough year, with the acclaimed album Stand! and an increasing spotlight in the public eye culminating in an appearance at Woodstock that summer.

Sly & The Family Stone—Live At The Fillmore East October 4th & 5th 1968 features all four of these energetic shows, which mark not only the first release of these sets but the first official release primarily highlighting live material from the group. The collection will be preceded by a double-vinyl 'best-of' featuring highlights from all four shows compiled by "Captain" Kirk Douglas, guitarist for The Roots. This special package will be exclusively available at participating independent record retailers on Record Store Day (April 18, 2015).
"Captain" Kirk Douglas, guitarist for The Roots states, "This performance is living breathing evidence of how much of a force of nature Sly & the Family Stone were at this point of their career. Every member of the group shines in a way that I can only describe as a revelation. It was enjoyable listening to the band break free from the studio arrangements of the songs we know and love to find new interpretations. And to think they did this twice in one evening! The heaviest of rock and the funkiest of soul jumps out of the speakers combined with a message just as relevant today as the day it was recorded. This deserves to be played LOUD!"

The complete SLY & THE FAMILY STONE—LIVE AT THE FILLMORE EAST OCTOBER 4th & 5th 1968 track listing is below:

The SLY & THE FAMILY STONE—LIVE AT THE FILLMORE EAST 2LP track listing is below: