TWIN DANGER will release their self-titled debut album April 21, 2015 on top of performances at SXSW, and in NYC and LA 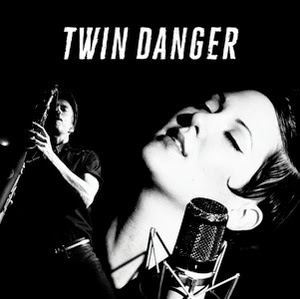 Twin Danger, the "dark, sexy" (VH1) new brainchild of Stuart Matthewman, GRAMMY-winning co-founder and multi-instrumentalist of Sade, and vocalist Vanessa Bley of Brooklyn-based alt-rock outfit Beast Patrol, will release their self-titled debut album April 21, 2015 on top of performances at SXSW, and in NYC and LA.

Bound by a mutual love for juxtaposed musical influences, spanning Black Sabbath to Chet Baker to iconic film scores, Twin Dangermelds noir jazz with midnight blues and cinematicgrooves. On the album, Vanessa's smoldering vocals and Stuart's smooth saxophone infuse a classic sound with contemporary style on 11 captivating originals. The album sessions also yielded one surprising cover, a distinctively different interpretation of the hard-rock single "No One Knows" by Queens of the Stone Age.

On their approach to the album, Vanessa notes, "We're making music to get lost in. It's warm and beautiful but there are dark undercurrents revealing fundamental issues of the self. That's what makes it Twin Danger. We like to fit into that category of what you want to play when the lights go down."

In addition to the album, Twin Danger will perform at SXSW this March following a flurry of performances in NYC and LA, which includes a set at KCRW's MojaMoja GRAMMY Brunch benefit alongside neo-soul band The Internet.

"We encourage people to dress up and get lost with us," says Vanessa about Twin Danger's live experience. "You'll be swinging, dancing, maybe a little teary eyed. Probably spill some wine on yourself, get a few bruises. You know, the usual jazz show." Stuart adds that "our journey so far has delivered us to sweltering, unexpected, and often messy places, with live performances climaxing with laughing tears and trodden on toes. Certain songs seem capable of striking St. Vitus dance into the hearts of hipsters, or touching the tear ducts of the wallflower in the corner."

Hailing from England, Stuart co-wrote many of Sade's best-loved songs on the band's multi-platinum records including "No Ordinary Love," "By Your Side" and "Your Love Is King,"in addition to collaborating with Maxwell on three of the superstar's critically-acclaimed albums. Vanessa, the daughter of renowned free jazz pianist Paul Bley, attended the Fashion Institute of Technology but soon found herself in the midst of NYC's downtown music scene, co-writing songs with collaborators like self-professed "bubble goth"singer Kerli (who introduced her to Stuart) and heading up Beast Patrol. According to Vanessa, the name Twin Danger "refers to the alter ego, the part of you that can be wild or irrational or even destructive-but it's still a part of you and not accepting that is what makes it dangerous."