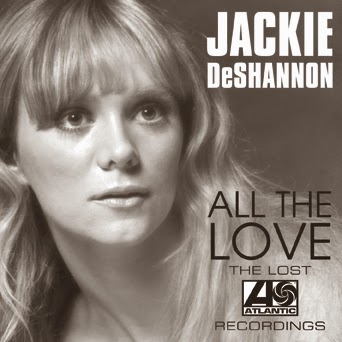 After a sterling 1960s stint recording for Liberty Records with such era-defining hits as “What The World Needs Now Is Love” and “Put A Little Love In Your Heart,” singer-songwriter Jackie DeShannon was signed to Atlantic Records in 1972 by famed producer and DeShannon fan Jerry Wexler. That year, she recorded and released her first album (Jackie) for the label, and then cut sessions for a second album in early 1973 with producer Tom Dowd (Eric Clapton, Allman Bros., etc.). However, only one of the 14 tracks ("Speak Out To Me") she recorded with Dowd came out on a single in 1973; the other 13 tracks remained in the vaults until 2003, when seven of the tracks from the sessions were added as bonus tunes on a limited edition Rhino Handmade reissue of the Jackie album.

Later in 1973, DeShannon recorded four tracks for Atlantic that she wrote with Van Morrison. However, as was the case with the songs she recorded with Tom Dowd, only one of these tracks, “Sweet Sixteen,” was originally released as a single. Now, All the Love—The Lost Atlantic Recordings brings together  DeShannon's entire 1973 Atlantic Records material in one place for the first time, featuring seven previously unreleased tracks along with her rendition of “Drift Away” that was intended for a single before the Dobie Gray cover version. Liner notes by Joe Marchese feature quotes from Jackie, who is thrilled to have these songs finally heard together in full, proper context after forty years. Rare photos, too…a major addition to Grammy Award-winning, Songwriter Hall of Fame member Jackie DeShannon’s discography!