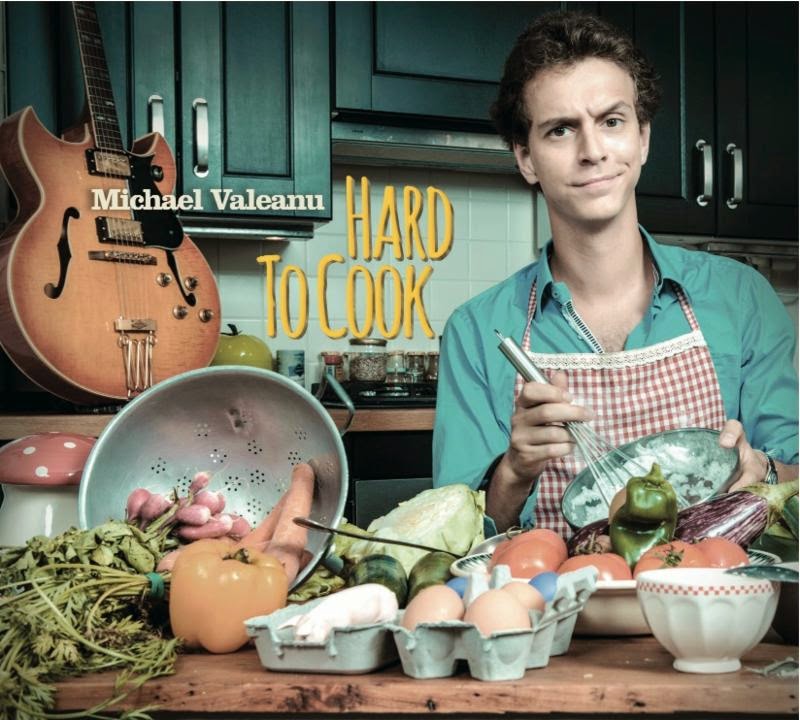 From Paul Bocuse to Julia Child, France has been known to spawn many of the world's culinary greats over the years. However, Parisian guitarist Michael Valeanu gives new meaning to the word gourmet with Hard To Cook, his sophomore effort as composer and bandleader. A wordplay on French expression Dur á Cuire, meaning tough cookie, Hard To Cook is meant to please the most demanding musical tastemakers. The ingredients of the feast come from everywhere: a pinch of folk, a sprinkle of impressionism, a generous spoonful of groove, and a minute knowledge of jazz guitar tradition.

Following in the footsteps of Wes Montgomery and Jimmy Smith, John Scofield and Larry Goldings, and fed by the eclecticism of the New York scene, Valeanu chose the Hammond organ, guitar and drums trio to present the music on this record. Purists will admire the matchless mastery of this trio featuring Jake Sherman on organ and Jake Goldbas on drums, while curious music lovers will savor a compelling blend of love songs, groove anthems and short acoustic poems.

Hard To Cook is a dream come true for Valeanu who learned jazz listening to Wes Montgomery records. "I fell in love with the Hammond, it has the sonic breath of a whole orchestra, and complements the guitar most beautifully." To realize his idea, Valeanu led a triumphant Kickstarter campaign that allowed him to have complete artistic independence.

Much like Valeanu himself, both members of his trio are also jacks-of-all-trades, masters of many, with groove as the common denominator. On the organ, Sherman's playing can resemble Ellington's sax section on the gripping "Blood Count,"  or the fiercest of bass players on "Norwegian Omelette." Goldbas is another force to be heard: with hard driving swing on "Firm Roots," irresistible groove on "Hard to Cook," and subtle percussion work on "Floating Island."

The icing on the proverbial the cake is none other than France's freshest diva, vocalist Cyrille Aimée, for whom Valeanu plays guitar and collaborates. She is a featured vocalist and lyricist on the savory "20 Years," which manages to appear as a simple bucolic folk song despite its rhythmic complexity, and continues to dazzle with a virtuosic scat lesson on the odd metered "How Deep Is the Ocean." We also owe Aimée the blossoming of Valeanu as a producer, which gives Hard To Cook its unique flavor in contemporary jazz.

The originals that Valeanu brings to the table are true to his eclecticism: a thoughtful introduction calling classical composer Leo Brouwer to mind, an exuberant groove of the title track, and the country scene conjured by Aimée's lyrics on the purely melodic "20 Years." Like the best of chefs, Valeanu aims to please, and with Hard To Cook, leaves listeners craving for more.

Born in Paris, France in 1985, Valeanu began playing guitar when he was 14-years-old. While in Paris, he studied at the Nadia & Lili Boulanger Conservatory as well as at the Edim/National School of Music of Bourg-La-Reine.  During this time, Valeanu was affirming his spot in the local Parisian music scene as both a sideman and a studio musician.

He moved to New York City in 2008 to attend the New School for Jazz and Contemporary Music in order to branch out into the jazz scene even further. Since moving to New York, Valeanu has played a myriad of clubs such as Smalls, Birdland, Jazz Standard, and Smoke, as well as various festivals throughout the United States. Since becoming a mainstay in the New York jazz scene, he released his debut album Tea Time in 2012.