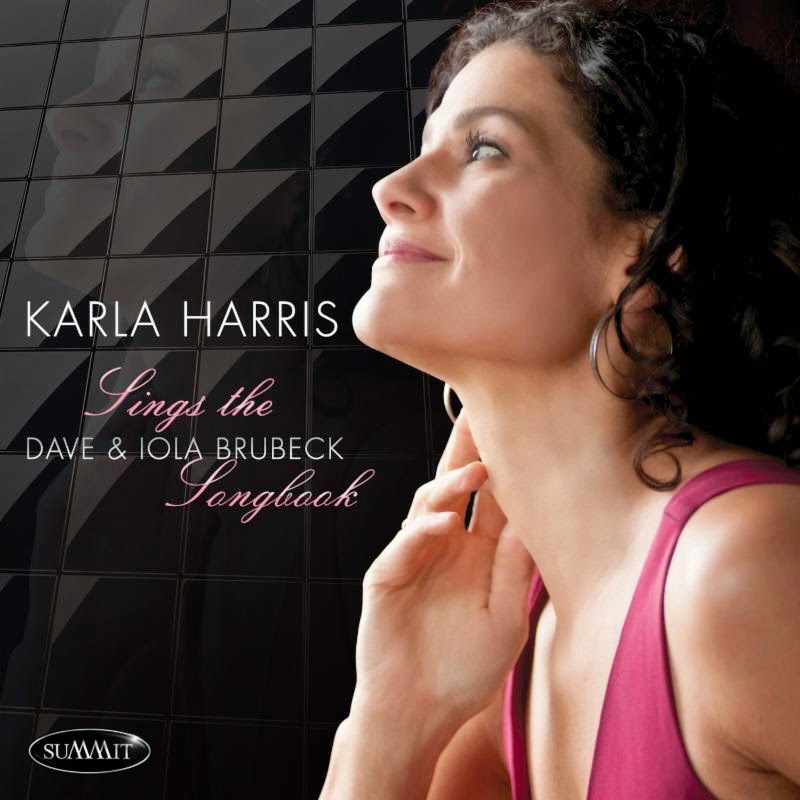 In her Summit Records debut, Karla Harris sings the Dave and Iola Brubeck songbook. Harris, a marvelous singer who gained a strong presence on the Pacific NW jazzscape after living for years in Portland, is poised to enter the national stage with this contemporary, respectful and musically innovative tribute. Not since a 1961 live recording of the Dave Brubeck Quartet with guest vocalist Carmen McRae has there been an album of vocal versions of this music, and no one has ever gone into the studio to record and release the Brubeck Songbook as a dedicated vocal project.

The project is the brainchild of Los Angeles-based producer, arranger and pianist Ted Howe, whose previous recordings include chart-topping tributes to Gershwin, Elton John and Ellington. Howe, a lifelong Brubeck fan who remembers the first time he heard the pianist in 1954 ("his playing floored me," he recalls) cites Brubeck as a major inspiration in his own career, and has long wanted to produce a vocal tribute of the composer's music.

Impressed with Harris after working with her at a 2013 concert he produced in Atlanta, Howe approached the singer with the idea.

"I loved the concept immediately. It was intriguing, to say the least," Harris says. "I had no idea words existed for so many of the songs Dave Brubeck composed or that Iola wrote so many of those lyrics. They've really gone largely undiscovered."

Work got off the ground when Howe, through the Brubeck estate, received a copy of a rare, out-of-print Dave Brubeck songbook published more than 30 years ago - a copy provided by Iola herself in early 2014 for this project, shortly before her passing.

"It felt like we were uncovering hidden treasure," Harris says of looking through the music for the first time. "There was as an opening verse to 'Strange Meadowlark,' for example, that we didn't know even existed. And there was Iola's name listed as lyricist on tune after tune, making it clear this songbook belonged to them both. Her words were sophisticated, filled with imagery and emotion; they changed my experience of some of these songs. I wanted to sing them very much."

Included among the 11 tracks on Karla Harris Sings the Dave and Iola Brubeck Songbook are several Brubeck classics along with a few less-known standouts, as well as some tunes from "The Real Ambassadors," a musical the couple wrote together in 1962.

Lyrics led the way as Howe created arrangements, opening some unexpected approaches in the process. For example, "In Your Own Sweet Way," traditionally played as a bright swing tune, here becomes something plaintive, taking its cue from Iola's surprisingly melancholy lyrics. "Take Five" melds a haunting new vamp with the classic Desmond progression to bring out what Harris calls "some frustrated longing" in those lyrics written by Iola and Dave.

The arrangements on Karla Harris Sings the Dave and Iola Brubeck Songbook are dynamic and a complement to Harris' singing, which is luminous and compelling throughout. She is joined by a group of masterful musicians who shine, collectively and individually - fitting for a tribute to a composer famous for instrumental hits. Howe, deft and fluid at the piano, is joined in the rhythm section by two players well known to contemporary jazz listeners - Modern Drummer Hall of Fame inductee Dave Weckl and internationally acclaimed bassist Tom Kennedy. The twin engine of Weckl and Kennedy, who have played together on various projects and tours for decades, powers beautifully and seamlessly the diverse feels among the tracks. Rounding out the group is L.A. session veteran Bob Sheppard adding alto sax to three of the 11 tracks with mesmerizing Desmond-esque flavor.

Throughout the recording, producer-arranger Howe honors Dave Brubeck's legacy. "This project was my way of saying thank you musically for his impact and for his influence on my own playing," Howe says. "I incorporated, in my own way, innovations Brubeck is associated with, such as polyrhythms, bi-tonalities and varied time signatures and styles, within a vehicle for Karla."

The result is a modern tribute that completely showcases Dave Brubeck's music hand-in-hand with the incredible lyrics of Iola Brubeck through the voice of newcomer Karla Harris.