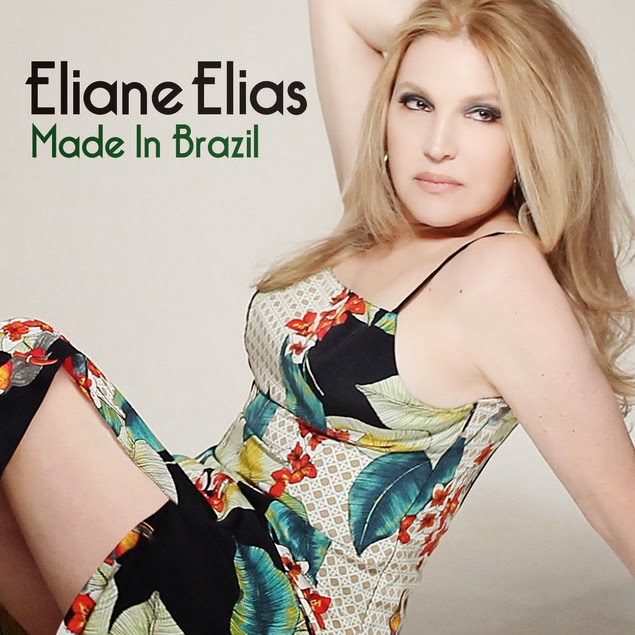 Eliane Elias’ Made in Brazil, scheduled for release on March 31, 2015 on Concord Jazz, marks a musical homecoming for the multi-GRAMMY®-nominated pianist, keyboardist, singer, and composer. In her three-decade long career as a solo artist, Made in Brazil results from the first time she’s recorded a disc in her native Brazil since moving to the United States in 1981. (International release dates may vary)

Elias wears many hats on this project as producer, composer, lyricist, arranger, pianist and vocalist. “I am completely immersed and involved in every single detail of the music and the recording process, from the birth of an idea until its completion through every aspect of the production until it reaches the public,” she explains.

Elias also invited Rob Mathes to handle orchestral arrangements on seven of the 12 tracks, which were recorded in London at the legendary Abbey Road Studios. “It’s so touching to hear the music unfold,” she says of the orchestral arrangements after they were overdubbed onto the São Paulo sessions. “You can see the musical notes on paper, but it’s something else to hear them realized and performed by members of the London Symphonic Orchestra.”

In terms of material, Made in Brazil contains six Elias originals plus two Ary Barroso standards, two Roberto Menescal chestnuts, and two Antônio Carlos Jobim world-renowned gems. Elias, who did all the arrangements for the basic tracks, said that she purposely wanted Made in Brazil to incorporate three generations of Brazilian composers. “But it’s not a retro record,” she clarifies. “It’s very contemporary yet with the tradition and authenticity of Brazil; it’s music of the world with Brazilian DNA.”

“Brasil,” penned in 1939, “is a Brazilian anthem,” enthuses Elias. “It’s reported to be the most preferred Brazilian song of the last 100 years. It’s about the beautiful things of our country, the Brazilian Brazil; its natural beauty, mixed ethnic cultures and the samba.” Here she accentuates the composition with a suspenseful diaphanous string arrangement, whereas Elias and the band concoct an intoxicating, lithe groove. Atop of the infectious samba rhythm, Elias graces the proceeding with a glowing Fender Rhodes accompaniment, which later unfolds into a joyous and rhythmic solo.

Barroso wrote “No Tabuleiro da Baiana,” in 1936, which was made famous by singer Carmen Miranda. Through the song’s theme about a tabuleiro, a tray filled with edible treats typical of Bahia, Elias says that her rendition allows her to share her affection for that particular Brazilian state. “I love the culture; I love the people; I love the music; and I love the food,” Elias says.” I’ve been in love with Bahia all my life.” On her delightful rendition, Elias hammers the samba with harder, percussive accents via her vivacious piano playing inside some hip-swerving inducing accompaniment while her dexterous vocal rides and swings on top.

On “Você” and “Rio,” Elias invites the songs’ composer, Roberto Menescal, to accompany on guitar. On “Você,” the two sound like lovebirds on the 1963 bossa nova hit as they croon the romantic lyrics while the string arrangement sweeps them afloat. Elias’ impeccable piano accompaniment and sparkling improvisation provide the perfect musical trimming.

On “Rio,” which also dates back to 1963, Elias retains the same lineup as she sings the song’s elegant lyrics about the beauty of a seaside landscape while creating beautiful modulations and colors through her harmonies. “It was special to have the composer be a guest,” Elias says of her collaboration with Menescal. “We shared some very tender moments.”

As a bonus track, Elias delivers a rapturous makeover of Menescal’s most beloved composition, “Little Boat (O Barquinho),” yet another aquatic-themed showcase for Elias’ incredible musical rapport with Johnson and Barata. Elias’ ingenious arrangement at times evokes the motion of a boat floating and moving through waves.

Regarding Jobim, Elias performs his epochal “Águas de Março (Waters of March),” which she notes is the most covered Brazilian tune in the world.” Through the song’s picturesque, stream-of-consciousness lyrics, Elias puts a new spin on the song’s allure with her R&B-inflected mid-tempo arrangement, and by inviting Take 6 to sing with her. Elias’ arrangement is a completely fresh take on the song, and her vocals combined with Take 6 are splendid.  “Ironically, when Jobim wrote this song in 1972, he thought he had reached the end of his career,” Elias explains. “The lyrics talk about being at the end of the road, about being alone, but the song’s message ultimately is optimistic and carries hope.”

Elias’ other revisit of Jobim’s music on Made in Brazil illustrates her capricious yet musical ingenuity. She delivers a sublime mashup of Jobim’s “Este Seu Olhar” and “Promessas.” Accompanied by Johnson, Teixeira and Ribeiro, this elegant rendition works splendidly as Elias delivers a heartfelt interpretation of the songs. Elias notes that the chord sequence of both compositions is the same and both melodies can be sung together simultaneously.

Whereas the aforementioned compositions display Elias’ mastery at arranging and interpreting Brazilian standards, other songs on Made in Brazil show her deft musicianship as a composer and lyricist. Draped with a gorgeous string arrangement, the yearning “Searching” puts Elias’ enchanting singing and piano playing squarely in the center as she coos the romantic lyrics about the affairs of the heart.  This song evokes the timeless quality of a Frank Sinatra standard.

Elias picks up the tempo slightly on the effervescent “Some Enchanted Place,” which contains poetic, optimistic lyrics and features guest vocals from her daughter Amanda Brecker.

Take 6’s lead vocalist Mark Kibble joins Elias on “Incendiando” and “Driving Ambition.”  On “Incendiando” the stellar performances of Elias and Kibble heighten the romantic and sexual tension revealed in the song.

The poetic pop/R&B ballad “Vida” features the prominent Brazilian R&B singer Ed Motta. Elias and Motta portray characters in a musical drama. Elias’ character describes what a woman wants in a romantic partner and Motta responds to her as the man she is looking for.

Amidst a magnificent string arrangement, Elias’ gorgeous composition “A Sorte do Amor (The Luck of Love)” is a comely piano and bass duet between her and Johnson that belies an empathic relationship built upon years spent together. Elias explains, “The lyrics are a bit ironic. They describe a love so incredibly intense, it takes away one’s sleep and peace of mind.”

Elias’ songs and lyrics on Made in Brazil  reveal the skills of a great songwriter. The intelligent, sensitive lyrics, beautiful melodies and rich, touching harmonies evoke some of the great songs of the 20th century and give continuity to the line of famous Brazilian composers. This album establishes Elias once and for all as one of Brazil’s most eminent musical artists.

“When I write lyrics, I am inclined to talk about feelings, wishes of the heart and life situations,” Elias says. “Aspects of love – being in a relationship; the search for the right person; the search for happiness; romance; and the desires of our hearts, while I amplify these ideas and bring another depth to the message with the melodies and harmonies.”


Listening to Made in Brazil and diving into Elias’ originals and fetching interpretations of Brazilian classics will surely delight and fill your heart and ears with soul-stirring joy.