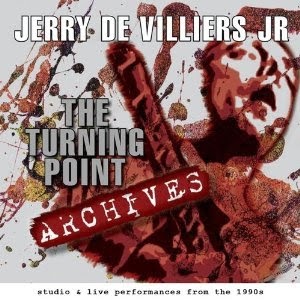 Good things never get old and it is with great excitement that the new label Timeless Momentum launches a CD from Canadian guitarist and composer Jerry De Villiers Jr.

Jerry was heavily active in the Montreal jazz scene in the 1990s having performed and recorded with various musicians including Alain Caron and James Gelfand. Caron's first album alone made quite an impact around the world and De Villiers Jr became noticed as a unique player with an incredible sound and a highly melodic phrasing. During those years, Jerry was also busy composing, recording and performing his personal music under the project name of Turning Point.

Due to various circumstances, none of the music Jerry recorded in studio with Turning Point was ever released on CD. In the late 1990s Jerry took a few years to pursue opportunities in television and film scoring. He wrote and performed the music for the hugely popular theme song to the four time Emmy Award winning show Arthur, sung by Ziggy Marley and more recently by Chance the rapper. Jerry worked on and scored for movies such as Art of War, Screamers and Cause of Death, amongst others, and composed the award winning soundtrack to the popular Quebec blockbusters Les Boys.

Recently, Jerry has been slowly returning to his first passion of jazz fusion through collaborations with bass player and composer Antoine Fafard. Antoine's album projects have been featuring artists including Terry Bozzio, Jerry Goodman, Simon Phillips, Chad Wackerman and Dave Weckl. The album Ad Perpetuum released in 2014 with Vinnie Colaiuta on drums features Jerry in its entirety and includes guest appearances by Gerry Etkins and Gary Husband. More recordings with Fafard and Husband are in the works and due to be released sometime in 2015.

The music on The Turning Point Archives consists of seven studio tracks recorded during 1995 and another seven pieces captured live in 1994. On the live tracks, Jerry is supported by Magella Cormier on drums, Mathieu Cormier on bass and Gerry Etkins on keyboards, while the studio pieces include a collection of various collaborators.

The music that had been kept archived for 20 years is a gem that is still relevant now and will continue to be in the years to come.