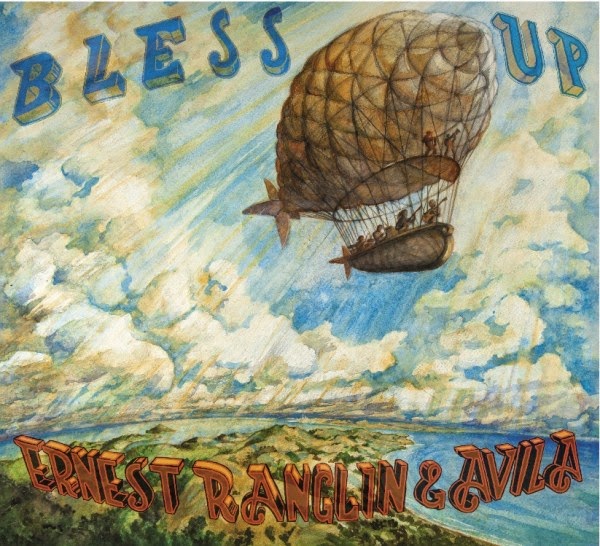 When Ernest Ranglin played the High Sierra Music Festival in July of 2011, producer Tony Mindel put together a backing trio of players able to shift between genres as easily as the master. The band included drummer Inx Herman (Vusi Mahlasla, Hugh Masekela, Paul Simon, Sting, Hamsa Lila), bassist Yossi Fine (Gil Evans, John Scofield, Rubén Blades, Stanley Jordan, Me’shell Ndegeocello, Ex-Centric Sound System) and keyboard ace Jonathan Korty (Vinyl, Electric Apricot). After the Festival, Ranglin and the band went into the studio. In three days of feverish creativity, they emerged with Avila, a record that won international kudos for its creative fusion of styles. During the sessions, the band forged a deep musical and personal bond. When Ranglin mentioned to Mindel that he had enough new songs for another album, Mindel made some calls and reassembled the band.*

This time around, Ranglin and the band had time to experiment with different rhythms, textures and flavors; they brewed up one of the finest albums Ranglin’s ever made. “This is an international band,” Mindel says. “Ernest is from Jamaica, Inx from South Africa, Yossi from Israel and Jonathan is a Californian. As they worked together, the interplay became instinctive. He had meticulously written charts for all the songs he brought in, but he was open to the band’s interpretations of the tunes. He’s a generous soul, musically and otherwise, with an amazing sense of humor and a work ethic and stamina that blew away the other musicians. He is a gentleman and one of the world’s greatest living guitar players.”*

Ranglin met the band at In the Pocket, a studio in the woods of Sonoma County. Most of the basic tracks were cut live, in one room, in glorious analogue sound, with Eric Levy (Garaj Mahal, Night Ranger) adding his keyboard expertise on several tunes, most notably the free flowing arrangement of Abdullah Ibrahim’s “Blues for a Hip King.” As the session unfolded, Ranglin and the band members urged each other on to new levels of creative discovery.*

The international mash up of “Bond Street Express” opens with Levy’s sustained keyboard notes suggesting the droning of an Indian tanpura, before Fine and Herman come in with a slow one drop reggae rhythm to support a Ranglin solo full of shimmering, Arabic flavored single notes and Wes Montgomery-like chord clusters. Herman’s subtle percussion accents and a bluesy horn section add a comforting density to the track. Levy’s measured bass notes on piano also play off of Ranglin’s sustained mid-range tones for a meditative take on Abdullah Ibrahim’s “Bra Joe From Kilimanjaro.” Ibrahim’s music has always inspired the musicians in this band and, with their help, Ranglin channels the essence of Ibrahim with his own unique interpretation. As was evident from their take on Ibrahim’s “Manenberg” featured on Avila, the first album Ranglin cut with this group, Ibrahim’s music brings out something deeply spiritual in this band.*

If Duke Ellington ever heard reggae, he might have written a song like “Bless Up.” Korty tickles the ivories and plays Hammond B3 organ, while Ranglin flutters through the mix, weaving in and out of the counter melodies played by a swinging horn section. “Follow On” and “You Too” are sultry, laid back reggae tunes, while Korty’s “El Mescalero” blends Latin rhythms that suggest tango, son, calypso and Tex-Mex, giving Ranglin an opportunity for a breathtaking display of jazzy flamenco influenced fretwork. “Ska Renzo” conjures the spirit of Jamaica in the 60s, with a few dub effects in the arrangement to highlight another brilliant, brittle solo by Ranglin. Every tune on the album moves in different directions, making for a timeless international excursion held together by Ranglin’s inventive guitar. “I love playing with these musicians,” Ranglin says. “Like me, they’re interested in music from all over the world. They make it easy for me to express the emotions I feel. I think working together on this album allowed us to do something special.”*

After the sessions, Mindel and Ex-Centric Sound System’s Yossi Fine, who has produced and mixed efforts by Vieux Farka Touré, Hassan Hakmoun, Hadag Hahash, Dancehall singer Anthony B and other notable reggae and world music artists, mixed the album. “It was inspiring to be working with Ernest Ranglin and mixing this music,” Fine says. “A chance of a lifetime. The album takes the listener through every era of Ernest’s music. He was constantly adding new flavors, while staying rooted in each particular style, be it reggae, jazz or Latin grooves.”*

“This band sounds like they’ve been playing together for years,” Mindel says. “I want people to hear this album so they’ll know Ernest is still going strong at 82, composing and playing great music that touches on all the eras of his career. I know he still has a lot of new ideas he wants to express and we want to continue making music with him, and for him, for as long as we can.”*

In the late 50s, Ernest Ranglin started adding rhythm accents to the tunes Coxsone Dodd was cutting at Jamaica’s Studio One by playing muted upstrokes on his guitar. That simple lick became the characteristic sound of a new groove called ska. His playing also laid the foundation for reggae’s relaxed rhythm, ensuring Ranglin’s place in the pantheon of innovative guitarists.*

After years of studio work in Jamaica, including the first session of a singer named Robert Marley, Ranglin moved to London to play with the Island Records studio band. His jazz influenced approach was featured on countless records, including Millie Small’s “My Boy Lollipop,” the first international ska hit and The Melodians’ classic “Rivers of Babylon.”*

Ranglin played with pianists Monty Alexander and Randy Weston in the ‘70s. His fluid bend of jazz, world music and reggae fit perfectly with their ideas about music without boundaries and brought him to the attention of a new international audience. His deceptively simple rhythms and sinuous leads created another genre, reggae jazz, showcased on groundbreaking solo albums like Below the Bassline, Memories of Barber Mac and In Search of the Lost Riddim, recorded in Senegal with Baaba Maal and his band. His reggae jazz style fully flowered on 2001’s Gotcha!, the album that prefigured his ongoing creative surge. Never one to stand still, Ranglin recently played the Blue Note in New York with Monty Alexander and rising reggae star Chronixx on a show billed as A History of Reggae + Jamaican Music. The audience included Ranglin’s mentor Chris Blackwell. In a backstage interview Chronixx, praised Ranglin’s ability to blend the past, present and future in his playing. Gigs like this showcase Ranglin’s ability to bring out the best in the musicians he works with, young and old. His playing continues to be marked by his serene approach and a playful sensibility that often conceals his jaw-dropping virtuosity. He was inducted into the Jamaican Music Hall of fame in 2008.