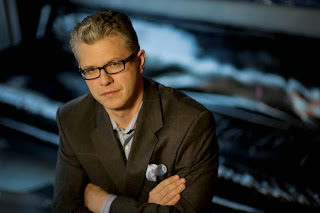 Gathering Call - to be released Jan. 21, 2014, via Palmetto Records - is the follow-up to Wilson's widely acclaimed 2012 album Attitude for Gratitude with his band Arts & Crafts.

Matt Wilson is renowned for his virtuosic flair as a drummer and his good-vibes positivity as a bandleader, not to mention his facility for collaborating with top musicians across the spectrum of jazz - from the mainstream to the avant-garde and virtually everything in between. Wilson scored glowing reviews for last year's release with his band Arts & Crafts, Attitude for Gratitude, an album that DownBeat called "fun, thoughtful, beautiful" and Vanity Fair dubbed "the essence of jazz."

For his next offering, the Matt Wilson Quartet is joined by a special guest - keyboard star John Medeski - for the album Gathering Call, to be released Jan. 21, 2014, via Palmetto Records. Wilson and company - with his Quartet featuring reedman Jeff Lederer, cornetist Kirk Knuffke and bassist Chris Lightcap, plus Medeski on piano - have created an irresistibly tune-rich, hard-grooving album steeped in the vintage virtues even as it sounds utterly fresh. Gathering Call rocks and it rolls, it sings and swings, brimming with brilliant musicianship and sly brio.

Gathering Call - the Grammy-nominated drummer's 11th album as a leader - features a brace of Wilson originals that range from the raucous, drum-driven title track and Ornette-accented "How Ya Going?" to the atmospheric "Dancing Waters" and elliptically lyrical "Hope (for the Cause)." The interpretive numbers include versions of two Duke Ellington compositions ("Main Stem," the rarely covered "You Dirty Dog") and uncommon tunes by Charlie Rouse ("Pumpkin's Delight"), Butch Warren ("Barack Obama") and Hugh Lawson ("Get Over, Get Off and Get On"), plus the Beyoncé hit ("If I Were a Boy") and a folk traditional ("Juanita"). No matter the material, what DownBeat publisher Frank Alkyer said about the playing on Attitude for Gratitude holds fully true for Wilson and crew on Gathering Call: "You can hear them all smiling behind their instruments."

Wilson - a native of Knoxville, Illinois, born in 1964 - is famous for his big ears and big heart, a gregarious Midwesterner to his bones and never jaded even though he has played on hundreds of recording sessions and on top stages the world over, from historic jazz dives to the White House, from Lincoln Center to festivals and concerts around the globe. About the new album, Wilson enthuses: "The recording really swings-I love 4/4 time, the lift of the beat. But I also love open, atmospheric and expansive environments. My songs welcome collective interpretation, with a piece's character coming about naturally. In my world, there's no separation between swinging and free: no categories. The most important aspect of the music is the common ground, where the sounds and personalities of the cats merge."

The core "cats" on Gathering Call - longtime Wilson confreres Lederer and Lightcap joined by new Quartet member Knuffke - bring "a world of music to what they do," says Wilson. "When it comes to musicians, what I always look for are players who have a great sound and great feel to their playing, which all these guys have in abundance. But I also want players whose default setting is 'yes.' I like musicians who are game - and who bring out the same attitude in me. What makes this quartet special is the quality of trust - we can be game and open and adventurous with each other, so the music flows naturally. We recorded the whole album at Maggie's Farm in one seven-hour day, without much rehearsal, really - we just played the music. It was fun, and I think you can hear that on the record."

As for the Quartet's guest musical foil, the keyboardist of Medeski, Martin & Wood fame is an old friend of Wilson, the two having met in late-'80s Boston while playing in the ace Either/Orchestra. "We always had a nice feel together, John Medeski and I," Wilson explains. "But along with his feel, energy and deep roots in such a wide range of music, John has these incredible instincts that just blew the band away. The leader of the Either/Orchestra, Russ Gershon, used to say, 'Give Medeski a sheet of music, and he'll not only get the notes right away, he'll get the vibe, too.' It's more true than ever - he got the music immediately and played his ass off, really inspiring the band with his sound and spirit."

Reflecting on the chemistry that resulted in Gathering Call, Wilson adds: "It was a union and a reunion, a magical day, really. It's very mysterious how a band gels and how good music happens. The more I do this, the more I realize that you can't bottle the intangible, in-the-moment aspect of welcoming and allowing music. But that's why it's so cool. The mystery of it is the appeal of it for me."

Popmatters observed about this very special drummer-leader: "Wilson sees his music as a way to reach out, to communicate. Uninterested in some kind of hip disdain for his audience, he reaches fully across the table to get this music heard by anyone who wants to enjoy it. This kind of playful seriousness about art is a perfect model for a modern mindset: informed but original, daring but joyous."