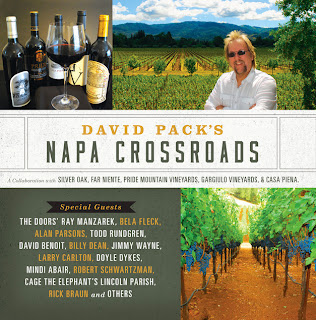 The serene setting of Napa Valley is not only home to some of the best winemaking in the world but is also a host to stellar music and music making. Napa Crossroads embodies the spirit of this collaboration led by legendary guitarist and hitmaker David Pack (Co-founder and voice of legendary rock group Ambrosia) and a gathering of top Napa Valley vintners and recording artists.

The album was created with a unique blend of superstars in the world of wine including Larry Maguire of Far Niente/Nickel & Nickel on jazz guitar and vocals; David Duncan of Silver Oak and Twomey on guitar and vocals, and Jeff Gargiulo of Gargiulo Vineyards on guitar, piano and vocals. Suzanne Pride Bryan of Pride Mountain Vineyards and Carmen and Gail Policy of Casa Piena wrote lyrics along with the rest of the group.

David Pack has won international acclaim both for his solo work and as front-man for progressive rock group Ambrosia. He is a Grammy winning producer of legendary artists including Wynonna, Selena, Aretha Franklin and Kenny Loggins, and a Music Director of global stage events including both of President Clinton’s Inaugurals and events for Barbra Streisand, Elton John & the late Leonard Bernstein, and recently for Avon, with Fergie of Black Eyed Peas and The Who’s Pete Townshend Tec Awards. His #1 pop classics such as “Biggest Part of Me” “How Much I Feel” “You’re The Only Woman” have graced global radio for over 35 years winning BMI 5 mil. Airplay awards. His collective works as a performer and producer have sold over 40 million units worldwide. He credits mentors & friends Leonard Bernstein & Quincy Jones, whom Pack introduced, as setting his life’s quest for excellence in creating special music projects that bring people together in unique ways, such as Napa Crossroads, David’s dream project.

Pack describes the experience as “Five years, five wineries and a lot of fun.” He goes on to say, “It’s a time capsule to preserve the memory of friends, Napa Valley and a time that will never be again.” Noted producer and musician, Pack has been drawn to Napa for many years with an unrequited passion for viticulture. He became a welcome figure in the Napa community a number of years ago after developing a friendship with winemaker Jeff Gargiulo and playing concerts for local events in the community. That friendship opened Pack to the world of undiscovered musicians among the winemakers and incited Pack’s desire to create a recording that serves as a backstage pass to a once-in-a-lifetime special event.

The wineries invested in the album financially and creatively, collaborating on two tracks each along with contributions from special guests, culminating in 14 tracks of original material. All songs were produced by Pack and written and recorded in Napa Valley beginning May 2009, which includes one of the final recordings of the late Ray Manzarek.

Larry Maguire, partner & president of Far Niente says, “I love my life in wine, but had I met David when I was 22, I think we could have had one really hot band. Working with him has helped me realize one of the great dreams of my life—to record my songs on a professionally-released album—and it has reawakened my passion for creating and performing music.” Maguire’s compositions, “Corner of His Room” and “Next Adventure” are drawn from moments with his children and the new adventures he and his wife have yet to experience.

“Being included in this project fulfills a dream for me. I have been writing songs for years and thoroughly enjoyed the process of actually getting them finished,” says David Duncan, President and CEO of Silver Oak Cellars, who contributed “Every Time I Look at You,” and “Crossroads Bound,” to the project. One is a love song to his wife and the other follows the concept of the “crossroads” which provide secret ways through the valley.

Suzanne Pride Bryan, Co-owner of Pride Mountain Vineyards says “‘O’ Blessed Vine’ and ‘You Were the One’ capture special moments in time at Pride Mountain Vineyards, where we are always happy to be ‘high on the mountain.’” Suzanne’s songs were inspired by her parents, Jim and Carolyn Pride, the winery’s founders.
“This combined musical effort, which includes five spectacular winery partners, will allow people throughout the world to experience the warmth, spirit, and humanity that grows ‘heartily’ in Napa,” says Carmen Policy, owner of Casa Piena. Policy brought “Full House Full Heart” and “A Friend Like You,” which were influenced by the idea of friends and family, a concept that is embodied in the name of his winery.


“David’s concept of bringing together the art of songwriting with the art of making wine defines Napa Valley and what we are all about. To see his dream come true and be a part of it is truly awesome,” says Jeff Gargiulo owner of Gargiulo Vineyards. His songs, “April Born in May” and “Wine Country Cowboy” were inspired by his daughter and Jeff and David Duncan’s band The Silverado Pickups.

The album will be exclusively available at the following Wineries: Far Niente/Nickel & Nickel, Silver Oak and Twomey, Pride Mountain Vineyards, Casa Piena and Gargiulo Vineyards as of October 15. Official release is set for February 4, 2014.