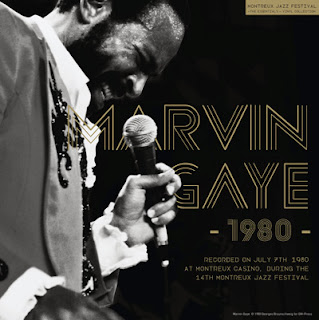 Montreux, 1980, just after Marvin Gaye’s concert, the words “a genius”, “he was like a king”, “his performance was absolutely incredible!” were spoken. This unbridled enthusiasm for the artist from Claude Nobs, founder of the Montreux Jazz Festival, was certain to find an echo in history one day.

And now it has! After the 2004 DVD and CD pack, Marvin Gaye’s smouldering soul music has been immortalised in a double LP due for release on 23rd October. Those who missed out on the live performance have not been forgotten, as absentees can now treat themselves to this gem of an anthology.

The double LP of Marvin Gaye’s Live concert brings together all his great classics. From his début until 1980, you will find the hits that defined your dating years, such as “Let’s Get It On”, “What’s Going On” or even “Ain’t No Mountain High Enough”, all in re-mastered sound. Recorded during Marvin Gaye’s only visit to the Montreux Casino on 7th July 1980, when he was driving teenagers wild at the 14th Montreux Jazz Festival, only 500 copies of the 78-minute LP are being released, making it a very limited luxury edition.

A few salient remarks from Claude Nobs about meeting Marvin Gaye back in 1980:

"Marvin really knows his music, that’s for sure. He has a very clear and defined vision of what his music should be about. The arrangements, the backing vocalists, the musicians… he knows it all. Yes, he had a reputation for being crazy and completely unpredictable, but to me he was a total professional! He was in complete control. He knew which musicians and backing vocalists he wanted, and he also knew exactly how he wanted his music to be produced. He was, quite simply, a genius. He was like a king, and the record companies, particularly at that time, had no idea how to handle this kind of talent, or how to work with an artist as complete as him."

The Marvin Gaye LP is the very first opus of THE ESSENTIALS – VINYL COLLECTION. A live collection from the great musical legends that have graced the stage of the Montreux Jazz Festival since it first began.