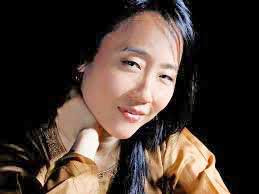 Pianist/composer Helen Sung has an announcement to make. In fact, declaration might be a more appropriate word. The artist’s musical statement can be heard at the center, literally and figuratively, of her Concord Jazz debut and her sixth album overall. Anthem for a New Day, a ten-song set that positions her at the forefront of a talented and diverse sextet, is set for release January 28, 2014, on Concord Jazz.

“I have been working on and ‘trying on’ different approaches in jazz music,” says Sung, who made the leap from classical to jazz piano in college and began performing in and around Boston and New York before releasing her first album in 2003. “With my previous albums, I was searching, experimenting – not that that ever ends. But this is the first project where I feel the most comfortable with who I am as an artist, where I am as an artist, what I’m doing as an artist. It brings the different pieces of my experience together in a way that’s organic and authentic. That kind of clarity is very exciting.”

Exciting enough for Sung to fly her colors with a sense of conviction that hadn’t existed previously. “When I hear the word ‘anthem,’ I think of flags or banners,” she says. “This album is my way of planting my flag in the ground. The journey continues, but at this point, I feel a confidence unlike before.”

Some of that confidence evident on Anthem for a New Day comes not just from Sung’s own diverse experience but from the talented crew backing her on this project: saxophonist Seamus Blake, trumpeter Ingrid Jensen, bassist Reuben Rogers, drummer Obed Calvaire, and percussionist Samuel Torres (saxophonist John Ellis also lends his bass clarinet on a tune). In addition, guest artists Regina Carter (violin) and Paquito D’Rivera (clarinet) make outstanding appearances.

Sung also shook things up a bit with her own instrumentation. “Along with the piano, I played Rhodes as well, which I haven’t done on my previous albums,” she says. “Classical and jazz are the two primary genres I’ve been immersed in since I started playing music as a child. Early on, I played classical concertos and sonatas with their diverse and grand textures; then when I started jazz, in my quest to really swing, I found myself primarily just playing single lines in my right hand while playing chords with my left. Now I feel like it’s all starting to come together – in my playing, my improvisation, my writing, and with my arranging. All of this makes for an album that’s much bigger in terms of the sonic space it occupies.”

She stakes out that territory early on with “Brother Thelonious,” an effervescent opening track with an interesting origin. Sung originally wrote it as the commissioned “theme song” for a Belgian ale of the same name, crafted by the small North Coast Brewing Company located in Fort Bragg, California. “The owners are jazz fanatics, and I got to meet one of them through a connection with the Thelonious Monk Institute of Jazz Performance [Sung is a graduate of the program’s inaugural class when it was housed at the New England Conservatory of Music in Boston]. I had recorded an earlier version of the song for them, but then I revamped it a bit and recorded a stronger version this time, and it became the lead-off track for the album. North Coast is a fabulous outfit. They do so much good – not just for jazz but for a variety of causes.”

The lively “Armando’s Rumba,” a Chick Corea composition, gets plenty of Latin mileage with a minimum of instrumentation. It’s just piano and clarinet – courtesy of Sung and D’Rivera – along with some very organic percussion techniques. “I was excited to contribute some non-piano musical material on this album!” says Sung. “After first laying down the instrumental tracks (clarinet, piano, and cajon), Samuel, Obed, and I then overdubbed the handclaps and foot stomps. It was so fun to work on this piece!”

“Hidden,” a composition by Sung, derives much of its melancholy sensibility from Regina Carter’s stirring violin as well as Ingrid Jensen’s cascading trumpet lines – two voices that establish themselves early in the track. Further in, Sung’s solo work on Rhodes adds a shimmering layer to the entire piece.

Sung indulges her occasionally ironic sense of arrangement in a rendition of “It Don’t Mean a Thing (If It Ain’t Got That Swing)” that includes occasional nods to her classical roots. While the title – and the original intent – of the Duke Ellington classic may have been all about swing, “my arrangement has hardly any swing sections in it,” says Sung. “It was intended to be tongue-in-cheek in that sense. Whether playing live or recording, I’ve always tried to present something familiar in unexpected ways.”

The title track gets under way with a quiet interlude, then segues into a rousing interplay between Rhodes, saxophone, trumpet, and the rhythm section of bassist Reuben Rogers and drummer Obed Calvaire. The result is everything an anthem is supposed to be – energized, unabashed and daring. And in this case, it’s one artist’s declaration of creative identity.

Anthem for a New Day includes a unique reading of Monk’s “Epistrophy” that resulted from a tug-of-war between planning and spontaneity. “I’ve been working on ‘Epistrophy’ for a while and it actually started out as a totally different arrangement,” says Sung. “What a luxury to have musicians who can hang with my tendency to tinker, and that’s kind of what happened in the studio with ‘Epistrophy.’ More than once, we would try something, after which I’d say, ‘No, that’s not it.’ And the band would say, ‘Are you sure?’ Finally we did this take, and I said, ‘That’s it!’ It was awesome to see everyone really ‘get’ the arrangement.”

A solo piano rendition of “Equipoise” closes the album on a note that’s reflective and full of promise. “In some respects,” says Sung, “this album is my way of saying, ‘This is me, take it or leave it,’ instead of something more tentative like, ‘Okay, let me work on it a little more.’ Not that I don’t want to keep growing and developing, but I’m happy to be in a place where I’m more confident about the kind of artist I am becoming. I can’t believe how rare that feeling has been in my experience. That this coincides with the opportunity to release the album on Concord Records is a great blessing, and I’m excited to share it with the world: this is a new chapter, a new day, and I invite you to join me in the celebration of this album and music!”