SANTANA TO PERFORM AT A STAR-STUDDED CONCERT IN GUADALAJARA, MEXICO ON DECEMBER 14TH AT THE VINCENTE FERNANDEZ ARENA HONORING HIS LATIN MUSIC HERITAGE 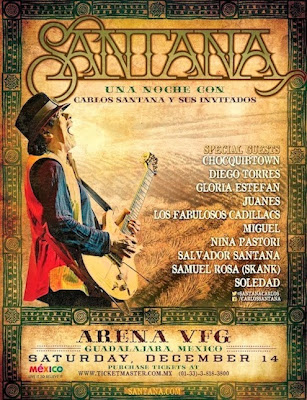 Ten time GRAMMY®-Award winning rock icon and Rock and Roll Hall of Famer, Carlos Santana announces today that he and his band SANTANA will be performing at a once in a lifetime concert event in Guadalajara, Mexico (in his native state of Jalisco) on December 14th at the Vicente Fernandez Arena, with a star-studded cast of musicians, all celebrating their Latin music heritage. Confirmed celebrity performances at the concert include Chocquibtown, Gloria Estefan, Los Fabulosos Cadillacs, Juanes, Miguel,Niña Pastori, Samuel Rosa of Skank, Salvador Santana, Soledad, Diego Torres, among others. More celebrity performances will be announced soon.

This concert is a homecoming for Carlos and a festive kickoff event to mark his forthcoming album project close to his heart entitled CORAZÓN. In addition to the superstars performing at the December 14th  show, Lila Downs, Ziggy Marley, Pitbull, and Romeo Santos will also be joining Santana on this star-studded album project CORAZÓN,release date to be announced soon.

CORAZÓN, the concert and album project brings Carlos back to his birthplace, in the city of Autlan, just south of Guadalajara and celebrates Carlos’ love of his musical heritage, as well as showcases Carlos’ own personal influence on Latin music and on today’s generation of Latin superstars. Many genres of Latin music are represented in these collaborations including pop, rock, salsa, hip-hop, folk, reggae, traditional and bachata.