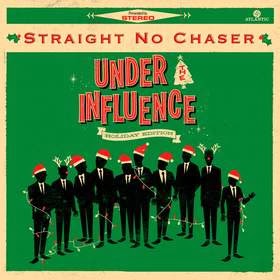 Atlantic Records recording group Straight No Chaser has announced the release of their new EP, "Under The Influence: Holiday Edition" The Yuletide-themed collection -- which follows the world renowned a cappella group's acclaimed new album, "Under The Influence" -- arrives everywhere October 29th.

"Under The Influence: Holiday Edition" sees Straight No Chaser bringing their indelible style -- and a number of legendary artists -- to an all-new cache of Christmas classics (see below tracklisting). Among the highlights are renditions of "Wonderful Christmastime (Feat. Paul McCartney)," "White Christmas (Feat. CeeLo Green)" and "Merry Christmas Baby (Feat. Otis Redding)," alongside new versions of favorites like "Amazing Grace."

As is tradition, Straight No Chaser will celebrate the holiday season with an extensive national touring schedule (see below itinerary). The dates -- which culminate with a New Year's Eve celebration at Mesa, Arizona's Mesa Arts Center -- can be found, alongside regularly updated ticket information, at www.sncmusic.com/tour. Caroline Glaser, a favorite from the past season of NBC's "The Voice," will open all dates.

Released earlier this year, "Under The Influence" sees Straight No Chaser reimagining a selection of their all time favorite songs alongside many of the superstar artists and undisputed music icons that made them famous. Produced by Mark Kibble -- a founding member of the legendary a cappella group Take 6 and one of Straight No Chaser's primary influences -- the album includes unprecedented collaborations with some of popular music's best and brightest -- including Phil Collins, Stevie Wonder, Elton John, Dolly Parton, Rob Thomas, Seal, Sara Bareilles, and Jason Mraz -- as Straight No Chaser put their distinctive and inimitable spin on songs known and loved the world over.

"Under The Influence" has quickly won Straight No Chaser critical applause from all corners. Perez Hilton declared "I Won't Give Up (Feat. Jason Mraz)" to be an "intoxicating concoction," while Broadway World noted that "the tremendously talented ten men that make up Straight No Chaser are ideally matched by (Elton John)... especially memorable." "One a cappella group, Straight No Chaser, was way ahead of the trend," declared Entertainment Weekly, "and given their devoted fanbase and a caholics, it's likely that they'll be around long after (a cappella) fades out of the pop culture forefront -- if, in fact, it ever does."
STRAIGHT NO CHASER "UNDER THE INFLUENCE: HOLIDAY EDITION"
Complete Tracklisting
1. Every Day Is Christmas (Feat. Colbie Caillat)
2. White Christmas (Feat. CeeLo Green)
3. Merry Christmas Baby (Feat. Otis Redding)
4. Wonderful Christmastime (Feat. Paul McCartney)
5. Home By Christmas Day
6. Nutcracker
7. A Song For Santa
8. Amazing Grace