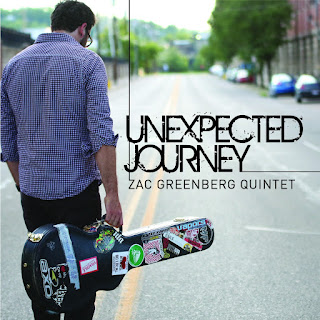 For an album about cancer, Zac Greenberg’s “Unexpected Journey” is unexpectedly upbeat.

Certainly, some parts are slow and somber; others are intense and unnerving. After all, the project was inspired by a disease that terrifies, leaving survivors in a state of perpetual uncertainty, wondering if and when it will return. But overall, this jazz-fusion concerto is captivating, ambitious and optimistic.

“This album tells a story that most patients can relate to, in terms of what they go through, with diagnosis and treatment,” Greenberg said.

The idea for “Unexpected Journey” grew out of Greenberg’s personal experience. His grandmother, Joyce Elkus, lost her husband, Dr. Fred Elkus, and later, her companion, Dr. Stanley Kaplan, to cancer. Greenberg was close to both men, who were prominent in the Cincinnati medical community. At his grandmother’s suggestion, Greenberg composed “Unexpected Journey” in their memory, and to raise money for charity. A portion of the proceeds from digital downloads will support cancer-related organizations.

“Unexpected Journey” consists of four movements: “Life,” “Diagnosis,” “Treatment” and “Beyond,” each evoking a different mood. “Life” begins peacefully, with positive energy and a sense of predictability. “Diagnosis” comes crashing in with shrieking electric guitars and tenor saxophone, thumping bass and thunderous drums. It is meant to be shocking. “Treatment” begins with a rhythm that suggests the monotony of chemical drips and radiation, eventually increasing in tempo, as if to suggest an urgent desire to hurry up and finish the unpleasant medical procedures. Finally, “Beyond” represents the completion of treatment and the uneasy, but hopeful wait-and-see period that follows. It is intentionally anti-climactic, leaving the listener contemplating the future. (Part of “Unexpected Journey” can be seen here: https://youtu.be/p1u_qB8vA6o)

Before writing “Unexpected Journey,” Greenberg spent time interviewing doctors, social workers and cancer patients, to better understand their experiences and thought processes.
“One of the things I heard echoing through all of my cancer research was how quickly and unexpectedly patients’ lives change, once they are diagnosed,” Greenberg said. “This music is a study into the human reaction in the face of unexpected unknowns and mortality.”


Greenberg’s musicians on “Unexpected Journey” are superb, and although relatively young, bring impressive experience to the table. Saxophonist Dave Engelhard has toured with the Zac Brown Band, and has performed on stage with the likes of Gregg Allman, Tom Scott, Shelly Berg, John Mayer, Grace Potter, Scott Weiland and others. Guitarist Amos Rose is a New York-based performer, teacher, recording engineer and producer. He has performed throughout the United States, as well as in Brazil, China, France and Qatar. Guitarist Kevin Wunderlich began studying with renowned session musician Joe Beck while in high school, before moving to New York City to study in New York University’s jazz program. He has since become a fixture on the NYC experimental and avant-heavy music scene, performing and recording regularly with experimental artists Epistasis, Voice Coils and Couch Slut. Drummer Bennett Eiferman studied with legendary musicians in New York including Joe Lovano, Ari Hoenig, Jean Michel Pilc, Steffon Harris, Dafnis Prieto and more.