The legendary B.B. King is being remembered with vinyl/digital reissues of Live At The Regal, Live In Cook County Jail and Deuces Wild, featuring famous collaborators 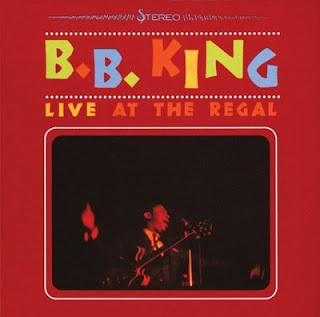 The world of music lost one of its all-time legends when the great blues guitarist B. B. King passed away on May 14, at the age of 89. Accolades and tributes came not only from fans but fellow musicians who were influenced by the Mississippi-born son of sharecroppers, who virtually popularized the genre that spawned rock 'n' roll. King's fluid, string-bending "talking" style and patented vibrato on the guitar he dubbed "Lucille" ignited the careers of acolytes from Eric Clapton, Jeff Beck and Jimmy Page to John Mayer and Jack White. Inducted into the Rock and Roll Hall of Fame in 1987, just a year after it started, King, a 15-time GRAMMY® winner and Lifetime Achievement Award honoree, was named by Rolling Stone in 2011 as No. 6 on its list of the "100 Greatest Guitarists of All Time." During the course of his remarkable six-decade-plus career, King's hits ranged from his first R&B chart-topper, "3 O'Clock Blues," to now-standards including his signature hit, "The Thrill Is Gone," "Sweet Sixteen," "How Blue Can You Get?" "Every Day I Have the Blues," and his 1988 collaboration with U2, "When Love Comes to Town," which exposed him to a whole new generation of fans.

Geffen Records/Universal Music Enterprises, to mark what would have been King's 90th birthday on September 16, is inaugurating a reissue of the venerable musician's catalog on vinyl and digitally re-mastered for online retailers, starting with the remaining nine titles of his 11 celebrated early albums released on Crown Records, a subsidiary of Modern Records. On September 11, joining the two other Crown Records titles already available (the 1956 LP release Singin' the Blues and 1958's The Blues), these nine releases on King's first label feature material that has been unavailable for decades.

Also available, a pair of classic live albums, Live at the Regal, and Live in Cook County Jail, will be re-released on September 18, both on disc and digital form. A double-LP set, Deuces Wild, which features King performing duets with a series of noted partners, including Bonnie Raitt, the Rolling Stones and D'Angelo, will be issued on vinyl for the first time, in a special vinyl gatefold edition, October 9.

Live At The Regal: Recorded November 21, 1964, at the Regal Theater in Chicago and released the following year, the album is considered one of the greatest blues recordings ever, with Rolling Stone naming it No. 141 on its 500 Greatest Albums of All Time and included in the National Recording Registry at the Library of Congress. With an ensemble that included bassist Leo Lauchie, pianist Duke Jethro, drummer Sonny Freeman and tenor saxophone players Bobby Forte and Johnny Board, King ran through a set list that included some of his greatest hits, including "Every Day I Have the Blues," "How Blue Can You Get?," "Sweet Little Angel" and "Woke Up This Morning (My Baby's Gone)." King admitted "that particular day in Chicago, everything came together," and that the disc was "considered by some the best recording I've ever had." UMe will now reissue the classic album in both 180-gram vinyl and newly mastered digital editions.

Live In Cook County Jail: Recorded in Chicago's Cook County Jail on a hot fall day in 1970 and released the following year, the recording of this historic event was named #499 on Rolling Stone's list of the 500 Greatest Albums of All Time, hitting #1 on the Billboard R&B charts, #3 on the Jazz charts and #25 on the Top 200. One of several live albums King released, it features a selection of his best-known songs, including "Sweet Sixteen," "The Thrill is Gone" and a medley of "3 O' Clock Blues" and "Darlin' You Know I Love You." King's band included bassist Wilbert Freeman, drummer Sonny Freeman, trumpet player John Browning, Louis Hubert on tenor sax, Booker Walker on alto sax and Ron Levy on piano. At the peak of his career renaissance, King won over a hostile crowd, turning the initial jeers (not for him, but the sheriff and chief judge in attendance) with his exuberant playing. King credits the prison's warden, Winston Moore, one of the country's first African-Americans in that post, with having the idea to bring him in to play. AllMusic called the version of "The Thrill Is Gone" on the album "possibly the best... of all its many incarnations." The September 16th release will include 180-gram vinyl and a version digitally re-mastered for online retailers and streaming services.

Deuces Wild: This double-album, originally released on November 4, 1997, will be issued for the first time on 180-gram vinyl with a special gatefold cover on October 2. The 35th studio album in his career, King hooked up with a series of celebrated duet partners for a set that showed off his remarkable range, including collaborations with Van Morrison ("If You Love Me"), Tracy Chapman ("The Thrill Is Gone"), Eric Clapton ("Rock Me Baby"), Bonnie Raitt("Baby I Love You"), D'Angelo ("Ain't Nobody Home"), The Rolling Stones ("Paying the Cost to Be the Boss"), Joe Cocker ("Dangerous Mood"), Dr. John ("There Must Be a Better World Somewhere"), Heavy D ("Keep It Coming"), Pink Floyd's David Gilmour & Squeeze's Paul Carrack ("Cryin' Won't Help You Babe") and Willie Nelson ("Night Life"). The disc was nominated for a GRAMMY® in the Best Traditional Blues Album category.