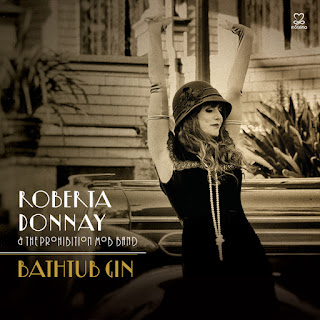 On the heels of their beloved A Little Sugar release comes their second Motéma Music release, Bathtub Gin – the CD, like A Little Sugar, mines 1920s gems but also takes the listener on a stroll into the 1930s. Award-winning vocalist and songwriter Roberta Donnay is that rare species of musician who almost lives in another time, as she and her Prohibition Mob Band exist to revive the Jazz Age of America.

A seductive vocalist, Donnay and her band swing mightily with this authentic collection of vintage jazz, blues and swing that introduces listeners to the swing era with its jump-swing rhythmic horn sections and new dances. Donnay also includes four party-rousing shout-chorus originals that evoke and revive the open spirit that birthed jazz.

She says of the era's music, "I think it's in everybody's DNA. Our grandparents listened to that music and somehow it filtered down inside of us.” How far can the Prohibition Mob Band go?  "To the moon," she says, laughing.

Honoring the tradition of such seminal singers as Bessie Smith, Ma Rainey, Sippie Wallace, Louis Armstrong, Ethel Waters, Billie Holiday and Josephine Baker, Donnay’s spitfire is on display from the moment the original title track “Bathtub Gin” opens the set.  Following is the song, also original, “Throw Your Heart” (Over The Fence).

Roberta Donnay’s background in roots jazz music came from listening to records, singing with the legendary Dick Oxtot’s Golden Age Jazz Band and more obscure jazz and jazz-folk bands bands. Donnay continues to produce, write, record, and perform as an independent artist. Her goal is to produce many more records and continue to bring this great music to the people. “Bathtub Gin” is Ms. Donnay’s 8th independent release. The “Oh Papa”video from Donnay’s CD “ A Little Sugar” is a brilliant example of the style of presentation Donnay presents.

Donnay's voice could make any classic material sound wondrous and timeless, but the fact that she digs so deep into American musical history -- and works with some of the Bay Area's top jazz musicians (under the guise of the Prohibition Mob Band) -- makes A Little Sugar not only sweet, but a recording that will stand the test of time.~ All Music Guide

With her singularly enticing sound, few contemporary vocalists are as well suited to dustily vintage material as jazz-blues stylist Roberta Donnay. She affectively proved so three years ago when, teamed with her Prohibition Mob Band, she surveyed standards from the 1920s and ’30s on the charming “A Little Sugar”. Now she’s back for more. ~ Jazz Times 2015

Donnay takes old school jazz, makes it new cool and most of all makes it fun. It swings and it swings hard. Old school has never sounded better and Roberta Donnay is certainly a name to remember! (5 stars) ~ Critical Jazz blog

This jazz baby makes the '20s roar again and swings out '30s tunes buoyantly enough to float away even the Great Depression...She's backed by top-notch musicians and the results are gloriously entertaining. ~ San Jose Mercury News

A festival favorite, Donnay's group appeared as a guest artist at many shows and festivals, including the Exit 0 Jazz Fest in N.J., Whiskey Fest in Portland, San Jose Jazz Festival, Monterey Jazz Festival, Jacksonville Jazz Festival, Mustard Mud & Music Festival and the Montreux Jazz Festival in Switzerland and are currently seeking festival bookings for the 2016-2017 calendar.


Roberta was asked to be a part of an event very close to her heart which is the memorial for the legendary jazz producer and Jazz Master Orrin Keepnews at Yoshi’s in Oakland, CA on November 29th, 2015 where she will pay homage to their musical relationship.

Visit THE JAZZ NETWORK WORLDWIDE "A GREAT PLACE TO HANG" at: http://www.thejazznetworkworldwide.com/?xg_source=msg_mes_networkntact