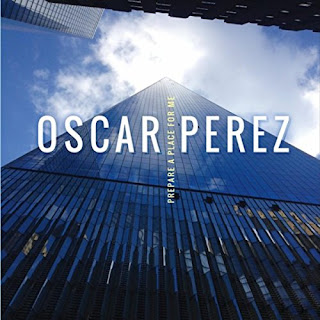 After two albums that emphasized the composing side of his ever-burgeoning art, Oscar Perez - who JazzTimes has described as "a pianist of impeccable technique and fluency" - presents his "blowing" side with the album Prepare a Place for Me, which he calls "a real playing record." To be released October 13, 2015, by Myna Records, the album sees the native New Yorker team with the rhythm duo of bassist Thomson Kneeland and drummer Alvester Garnett, plus alto saxophonist Bruce Williams on five of the nine tracks.

Perez and company essay seven of the pianist's glittering, grooving originals, as well as an intoxicating, flamenco-tinged recasting of Thelonious Monk's "Round Midnight" and a lovely interpretation of the Hoagy Carmichael ballad "The Nearness of You." Reviewing his septet album Afropean Affair in 2011, JazzTimes praised Perez as "an extraordinary composer who blends the rhythmic complexity of Latin American music with the elegant harmonies of jazz," while DownBeat chimed in by marveling over the music's "wondrous interaction of piano and band." With Williams, Kneeland and Garnett alongside, Perez will play album-release shows on October 8 at Trumpets in Montclair, NJ, as well as on October 26 at Cornelia Street Café in Manhattan.

Perez - a protégé of Danilo Perez and Sir Roland Hanna - won 2nd prize in the venerable Jacksonville Jazz Piano Competition in Florida last year, with his personal rendition of "The Nearness of You" standing out. "I've always considered myself a composer as much as a player," he says. "But I played the competition and wanted to make playing the focus of my next album. Recording with cats I've performed live with for awhile was really important to the feel of this record. There's a lot of listening and interplay in the trio with Thomson and Alvester - the music tends to simmer, with solos developing in a slow burn. Bruce is a kindred spirit, too, and his playing tends to push the harmony, but in a soulful way."

Prepare a Place for Me kicks off with a straight-ahead jazz version of "Just Everything," an engaging Perez tune originally cast as a Spanish-titled bolero ("Solamente Todo") on his quintet debut album, Nuevo Comienzo, from 2005. The album's originals also include the aptly titled "Snake Charm" and

Williams-led swinger "Headin' Over" (with Perez's writing on that tune influenced by Cedar Walton), as well as the intricate "Message to Monterey." Then there are "Prepare a Place for Me," the absorbing, gospel-inspired title track, and "Mushroom City," which is built on an infectious Brazilian baiao groove. Perez's personal favorite is the closer "Song for Ofelia," about which the pianist says: "It has a special place in my heart. I wrote it after the passing of my grandmother Ofelia Betancur. She was the matriarch of the entire family and showed incredible strength through many of life's difficulties. My daughter Ofelia has her same spirit."

Throughout Prepare a Place for Me, Perez's playing sparkles and dances with melodic interest and rhythmic verve, intertwined with his bass/drum partners and the long-breathed lines of Williams. About their interaction, the pianist says: "When you're younger, you're out to impress with your playing, aiming to turn heads. But now I feel that the emphasis is on just making the music all it can be - not concentrating on sounding as impressive as possible as an individual but on trying to make the other players sound great. I want the vibe to be as communal as can be, and I think that's when music - especially jazz improvisation - thrives."

Pianist-composer Oscar Perez was raised in Queens, NY, on his father's Cuban folk music, with piano lessons and playing in the church band a key part of his young life. He attended New York's "Fame" academy of LaGuardia High School for the Performing Arts, studying with classical teachers. He later graduated from the Jazz Performance program at the University of North Florida, already composing there for small groups and big band. His fascination with the beautiful energy of Latin music took him to New England Conservatory in Boston to study with Danilo Perez, an enduring influence. Oscar completed his Master's Degree at the Aaron Copland School of Music at Queens College, studying there with Sir Roland Hanna. While at Queens College, he married his love of jazz improvisation with the classical piano literature. Perez's early twenties saw him share stages with such jazz icons as Bunky Green, George Russell, Curtis Fuller and George Garzone.

Since moving back to the New York area, Perez has spent recent years on the road with such jazz confreres as trombonist Wycliffe Gordon, bassist Christian McBride, trumpeter Eddie Allen, saxophonist Mike Lee, trombonist Steve Turre, guitarist Dave Stryker, vocalists Melissa Walker and Charenee Wade, and saxophonist Adrian Cunningham. Perez also toured as a pianist for vocalist Phoebe Snow, performing in such top pop venues as The Theatre at Madison Square Garden and Webster Hall. He has served as music director for St Edward's Church in Harlem. His longstanding commitment to church music has been embodied in the gospel music he explores as accompanist for the Nightingale/Bamford Gospel Choir. Perez has toured across North America, Latin America and Europe, as well as through Russia.