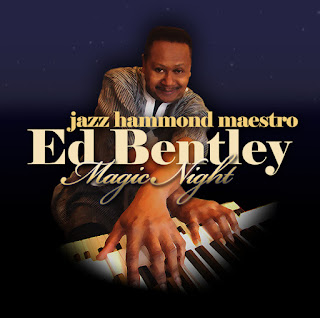 Ed Bentley is a fine pianist, organist, vocalist and multi-instrumentalist known principally for his work on Jazz Piano and Hammond Organ despite his early start with the double bass and electric bass at the age of 14 and acoustic and electric guitars at the age of 18.  Ed arrived in the UK in 1971. Working musicians rated him as soon as he arrived, since then he has been winning friends all over England, Europe, the USA and most parts of the world with his music.

With four CDs and four Vinyl albums behind him, with record companies such as SB Records, Pleasure records, M Records and Prestige Records.  Ed’s Big Band, Quintet, Quartet and Trio has also played places like Ronnie Scotts, Pizza Express Dean Street, The 100 Club Oxford Street, The Jazz Café Camden Town, The Royal Festival Hall and Queen Elizabeth Halls to mention just a few of his regular venues in London.  Jazz Festivals and Tours in the UK and Europe include top venues like The Fabrik, Uncle Po and Dennis Swing Club in Hamburg.  The Quarter Latin, Eierschalle, Joe’s Beer Salon and the Talk Of The Town in Berlin were among his gig list.  Top venues in Italy, France and Holland have been regular in his diary.

Ed has also worked with top artists including a World Tour with  Deniece Williams, Irene Reed (Count Basie Band), Percy Sledge, Guitar Legend Al Casey, Bobby Watson, Michael Hashim and the late George Williams (Tymes) with whom he had a commercial hit which Ed wrote “Never Again” which stayed in the National  Charts Top Twenty for ten weeks, to mention a few artists in the USA .  Ed has also worked with top artists in the UK, Europe, Australia, the Far Eastand Africa, including playing Piano for Huge Masekela at the Cheltenham Jazz Festival recently.

From his first in 1979 to his latest 2010 “Magic Night”Ed has released some fine albums.  His “Bolla, Keyboard Blues” Album was reviewed by the late Billy Higgins and his “Metropolis” Album was reviewed by Cedar Walton both on Prestige Records.  Ed’s admirers have included the late Jimmy Smith who inspired Ed to take up the Hammond Organ, Sir Paul McCartney, Joe Sample and Tony Bennet to mention just a few.

Visit THE JAZZ NETWORK WORLDWIDE "A GREAT PLACE TO HANG" at: http://www.thejazznetworkworldwide.com/?xg_source=msg_mes_network