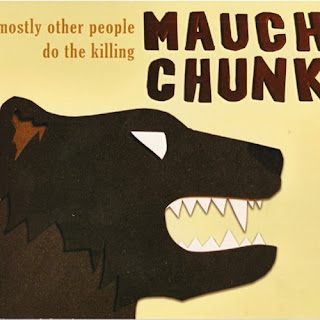 Hot Cup Records is proud to present Mauch Chunk, the first release by the new quartet lineup of Mostly Other People Do the Killing including Ron Stabinsky on piano.  Mauch Chunk contains seven new compositions by bassist/bandleader Moppa Elliott and returns to the hard-bop roots of the ensemble. Deeply rooted in the tradition of the post-bop small ensembles of the 1950s and 60s, Mauch Chunk presents a unique approach to jazz in the 21st century.  Unlike many other contemporary artists, Mostly Other People Do the Killing continue to base their music on swing and what Jelly Roll Morton referred to as "the Spanish Tinge."  Perhaps this is the logical outcome of an ensemble whose history contains multiple projects in which the members of the quartet transcribed and emulated music from the storied period of the late 1950s and early 1960s.

Over the past twelve years, Moppa Elliott's Mostly Other People Do the Killing have earned a place at the forefront of jazz and improvised music performing in a style that is at once rooted in the jazz tradition and highly improvised and unstructured.  Their initial string of albums explored the intersection between common practice hard-bop style compositions and free improvisation, incorporating a wealth of other influences from pop music to the classical European repertoire.  In 2010, bandleader and composer Elliott expanded the group's framework and began exploring specific eras of jazz resulting in 2011's Slippery Rock (an investigation of smooth jazz and fusion styles) and 2012's Red Hot (featuring an expanded lineup recalling the jazz and blues recordings of the late 1920s and early 1930s).  2014 saw the release of Blue, a note-for-note recreation of Miles Davis' classic album, Kind of Blue.  This project, ten years in the making, evoked a wide range of strong responses from both the public and critics and will likely be a part of the discussion of the state of jazz in the 21st century for years to come.

Mauch Chunk combines historical jazz lineage and the 21st century perspective of MOPDtK's members.  To emulate the sound of classic jazz recordings of the 1950s and 60s, the release was recorded and mixed on analog tape. The project also embraces the traditional idea of albums being under 50 minutes long.  The classic albums of the jazz canon were constrained by the LP format, but benefit from their conciseness and focus.

Each of the compositions on this album bears a dedication to an individual who influenced the compositional process in some way.  Some of these influences are musical, while others pertain to places in Pennsylvania or specific towns that relate to the dedicatee.
"Mauch Chunk is Jim Thorpe," dedicated to Henry Threadgill and his composition "Spotted Dick is Pudding," is a harmonically rich minor-key shuffle with a major-key bridge a whole step lower than the initial theme.  Stabinsky's piano solo is over the minor key section of the form that changes to the major under Irabagon's saxophone solo and recalls the harmony of "All of Me." After a return of the initial theme, the tune ends with an improvised section that includes references to composer Conlon Nancarrow and a spontaneous Picardy third.  This performance encapsulates the MOPDtK approach to ensemble interplay, balancing "conflict and collaboration" between the members of the quartet.

"West Bolivar," dedicated to Brazilian musician and activist Caetano Veloso, is a bossa nova with several rhythmic alterations and mixed time signatures.  The melody of the first section repeats and develops through several tonal centers, while the secondary theme includes fragments of Veloso's composition, "Cobra Coral."  During the ending vamp, Stabinsky wryly quotes Elliott's "Hop Bottom Hop" from the album Shamokin!!!, as well as The William Tell Overture.

"Obelisk," an odd-metered minor-key composition inspired by the music of Dave Holland, contains some of Stabinsky's finest recorded solo work.  The piano solo begins in the minor key and gradually accelerates, before leading to the B section based on dominant 7th chords. The solo concludes with a transition from Wayne Shorter's "Juju" to Van McCoy's "Do the Hustle."  Irabagon's solo begins in the relative major and the composition ends with an improvised section that incorporates the music of both Philip Glass and Cream.

Saxophonist, educator, and inspiring human being, Will Connell passed away in 2014 and his memory inspired the composition, "Niagra," named after the club in Alphabet City where he gave Mostly Other People Do the Killing their first gig.  The tune is a slow waltz with irregularly phrased melodic sections alternating with simple two-chord vamps.  Connell's alto saxophone was a constant presence every Wednesday night at Niagra where he would curate sets by up-and-coming artists, as well as host a jam session that sent all participants home with the best possible vibes.  He is sorely missed.

The great pianist Sonny Clark was born and raised in Herminie, PA and his music, specifically his harmonic tendencies inspired the composition named after his hometown.  The form alternates between a vamp in F minor with a "Spanish tinge", and a blusier form that moves through several key centers.  Irabagon and Stabinsky spar throughout the piece, resolving to the only written ending on the album.

The fact that there is a place in Pennsylvania called "Townville" was brought to Elliott's attention by dancer/activist Brieane Beaujolais.  "Townville" is a companion piece to "Biggertown" from 2008's This Is Our Moosic.  Both pieces are three separate tunes, each a major third apart in tonality as a nod to John Coltrane's harmonic experiments.  Whereas "Biggertown" was three separate rhythm changes compositions, "Townville" is three blues heads, each utilizing the same melodic content.  In each melody, the same figure occurs in the break on the same pitch, creating a contrasting harmonic color in each of the three keys.  Each melody is preceded by a four-measure cue to allow the ensemble to move into and out of each written section from freely improvised sections. The improvised ending catches everyone, including the performers, off-guard.

"Mehoopany," the obligatory boogaloo, is dedicated to Elliott's neighbor in Queens, Frank Fonseca, an semi-professional singer in a doo-wop group "The Mandells" in the late 1960s who scored a minor radio hit with a tune called "Lulu Bugaloo" in 1967.  The steady rhythm of the tune is punctuated by Shea's chaotic snare drum work, and after two solos over the form the ensemble explodes into chaos before ending the tune with a live-performance fade-out.

Pianist Ron Stabinsky first joined MOPDtK in 2013 as part of a project at the Bimhuis in Amsterdam commemorating the anniversary of Eric Dolphy and Booker Little Live at the Five Spot.  After collaborating on this and the subsequent Blue project, Stabinsky's presence in the group was solidified. In addition to his work with MOPDtK, Stabinsky is an accompanist in virtually every possible context from classical recitals, to community choirs, to improvised music, jazz, pop and everything in between.  Stabinsky fits into the aesthetic of the group perfectly contributing virtuosic solos packed with the same irreverence that MOPDtK is known for as well as musical non-sequitors, quotations, and references to everything from Philip Glass and Conlon Nancarrow to Billy Joel and earlier MOPDtK material. Stabinsky lives in Plains, PA and is a member of the Peter Evans Quartet and Quintet, Charles Evans Quartet (no relation), and recently recorded his first solo album to be released on Hot Cup Records in January 2016.

The drumming of Kevin Shea bears special mention.  Few other drummers of his generation are as recognizable and idiosyncratic.  His chaotic propulsiveness drives the band and creates the unique swing feel that has become a hallmark of MOPDtK.  Named "Best Drummer in New York" by the Village Voice, Shea regularly tours with the noise-rock-improv duo, Talibam!, and recently released a third album with the band People featuring Mary Halvorson.

Jon Irabagon exclusively plays the alto saxophone on this album for the first time since 2006's Shamokin!!! His sound is distinctive, and with this recording, Irabagon firmly reestablishes himself as one of the most respected and individual performers on the instrument since winning the 2008 Thelonious Monk competition.  His use of extended techniques blend seamlessly into the collage style of MOPDtK and his mastery of all aspects of the instrument is on full display.  When not playing with MOPDtK,  Irabagon works with Dave Douglas, Mary Halvorson, and Rudy Royston in addition to leading his own ensembles. He recently showcased his versatility by releasing a daring solo sopranino saxophone recording and a straight-ahead jazz quintet recording on his Irabagast Records Label.

Bassist Moppa Elliott teaches music at St. Mary's High School in Manhasset, NY and double bass and trombone at the Long Island Conservatory.  He also produces and releases albums on Hot Cup Records including his upcoming solo bass release Still, Up in the Air to be released in January 2016.
Posted by Jazz Chill at 11:47 AM