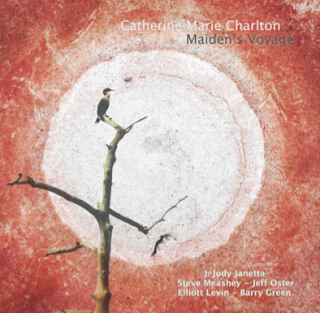 On her partnership with Janetta, Charlton recalls - "15 years ago I was a solo classical pianist beginning to explore improvisation. Jody heard something in my playing akin to the classically-influenced improvised music which had been a big inspiration to him, and he asked me to perform. From the start, our musical connection was magic. Jody introduced me to his jazz record collection and we went on to perform as a piano-percussion duo for many years.  We parted ways for a bit during the time of my solo introspective releases - Red Leaf Grey Sky and River Flow, and have now reunited for Maiden's Voyage. The one-take improvisation on "Beneath the Dream" was the first track captured on the first day of recording, after four years apart."

In addition to seven originals, Maiden's Voyage features Charlton's lyrical improvisation with Sun Ra-inspired chromatic complexity on Eden Ahbez's "Nature Boy," "Adios Nonino" by Astor Piazzolla, Erik Satie's ethereal "Gnossienne No. 4" and two deeply emotional versions of the standard - "Autumn Leaves."  The album's only non-improvisatory piece is Alberto Ginastera's "Dance of the Graceful Maiden (Danza de la moza donosa)," which marks the start of the pianist's "voyage" from classical score interpretation to the seven spontaneous compositions as well as the free improvisations spread throughout the album. A highlight of these originals is the subdued solo piano piece "All That I Feel."

Charlton credits much of her approach to the teachings of long-time mentor and inspiration - the cellist David Darling, and his organization Music for People. Darling was hugely influential to a young Charlton in her earlier years, when he told her that her passion and commitment to the moment was impressive. Humbled by his words the pianist/composer has tried to live up them ever since.

Catherine Marie Charlton's 2011 recording Red Leaf, Grey Sky won the Independent Music Awards for Instrumental EP and was also awarded "Best Instrumental Album-Piano" in the 8th Annual ZMR Awards, as voted on by broadcasters worldwide.  Most recently, she performed on several tracks of Jeff Oster's Next (Bernard Purdie, Chuck Rainey, Nile Rodgers, etc).  A recipient of grants and residencies from the Delaware Division of the Arts, Pennsylvania Council on the Arts and the Brush Creek Foundation for the Arts, she is currently composing a body of works inspired by the Wyeth family of artists in collaboration with the Brandywine River Museum of Art. Charlton is a Steinway Artist.