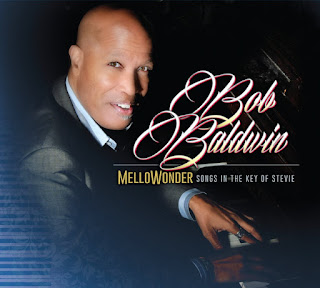 Whatchu know `bout that “MelloWonder” - those songs on a Stevie Wonder album that send you not half a mile from Heaven but to and through the hallowed gates? Lovers dissolve into the creamery slow swirl Milky Way of Stevie balladry. It melts in your heart…intoxicating your mind. Cap’n Bob Baldwin knows all about it and has set his keyboard instrument panel on a singularly bliss-driven musical course he calls MelloWonder: Songs in the Key of Stevie.

Bob met Stevie once in `69 when his father accompanied young Wonder singing “My Cherie Amour” at Memorial Field in Mount Vernon. It was after the turn of the decade when Bob completely fell in love with Wonder’s gifts by way of four Tamla/Motown LPs in his sister Deborah’s collection released between `71 & `74: Music of My Mind, Talking Book, Innervisions and Fulfillingness’ First Finale.

These were the “core four” album upon which “Little Stevie” graduated into the full maturity of his Steveland Morris destiny - from his Motown Hitsville studies in the midst of an enviable collective of professors at every stair step of musical creation to the progressive experimental incubator provided by producers/sound designers Robert Margouleff and Malcolm Cecil: creators of the behemoth early synthesizer T.O.N.T.O. (The Original New Timbral Orchestra). Wedding his composing, singing and multi-instrumental playing skills to the otherworldly sounds that T.O.N.T.O. brought to Stevie’s fingertips unlocked a vault of artistry unparalleled and unprecedented.

Across a career for which a two-decade milestone was achieved in 2013 with his CD Twenty, Bob Baldwin has twice honored the canons of giants; Never Can Say Goodbye: A Tribute to Michael Jackson (2010) and Betcha By Golly Wow: The Songs of Thom Bell (2012). He’s wanted to do a tribute to Stevie almost from his studio beginnings. Over the last two years, everything finally came together.

It is essential to note that a full-album homage to Wonder by a contemporary jazz artist has, surprisingly, never been done. Singers from Barbara Streisand to B.B. King have sung his songs. Ensembles from Brazilian Jazz trio Azymuth (featuring the late Jose Roberto Bertrami on keyboards) to the London Symphony Orchestra have also done songs. Ramsey Lewis collaborated with Stevie on two new songs for his 1977 LP, Love Notes. Elsewhere, Ronnie Foster produced tenor saxophonist Stanley Turrentine’s 8-song audiophile Blue Note Records offering Wonderland: The Music of Stevie Wonder in`87, and the late, great George Duke produced winds master Najee’s CD Najee Plays Songs From the Key of Life: A Tribute to Stevie Wonder in `95. However, neither album was theirs. For the closest thing to what Bob has done, one must reach back to 1974 for Hugo in Wonder-Land: a 10-song space oddity by Hollywood composer/arranger/conductor Hugo Montenegro experimenting with synthesizers utilizing Stevie’s music. Cool but no comparison.

Bob Baldwin brings the totality of his musicality as a player, composer, arranger, keyboard/synth specialist (and sometimes singer) to his14-song voyage into MelloWonder, honoring that magi-mystical sweet spot that Stevie’s sound sends us. He showcases a few guest players and singers including flautist Ragan Whiteside on several seamless contributions as well as tenor saxophonist Ryan Kilgore (of Stevie’s current Wonderlove band) tenderly blessing the exquisitely brushed beauty of “You and I.” Baldwin even brings string players to the playground not for lush padding but a soulful rhythmic workout on “The Real Thing / Keep It Real,” one of two songs Stevie originally gifted to Sergio Mendes to help set his New Brasil `77 concept apart from his super successful Brasil `66 incarnation.

However, MelloWonder’s very best moments are moments in which all or most of the music emanates from Baldwin himself - in layers of aural keyboard delight. His tasteful shifts from acoustic piano to Rhodes on “Love’s Light in Flight / Love Trippin’” over deliciously dispatched digital percussion…his use of the hand-held melodica as both a second voice and a horn section on “Creepin’”…his speaking the poetry of “Where Were You When I Needed You” in the second half of “Superwoman” to add emphasis to the words, This is high level inspiration. Who could listen to Bob’s fully engaged renderings of “Lately,” “Looking For Another Pure Love” and “Rocket Love/Back to Earth” and not be impressed that every drum, bass and keyboard lick was played by Bob & Bob alone? And there’s more. Baldwin also composed two new songs: one in his own heart-stilling, pitch- bending style (“Stevie”) and the other in the key of Stevie (“Wonderland”).

So close your eyes to see and feel where Bob Baldwin is coming from within the artistry of Wonder…allow the layered melodies, harmonies and rhythms to send one you love’s head and yours on slow floating figure eight swivels into infinity…