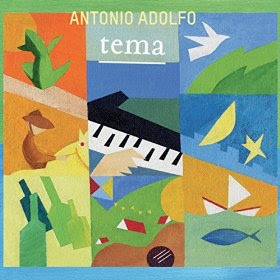 For half a century, the eminent composer and pianist Antonio Adolfo has dedicated himself to the profound exploration of jazz in the context of the great Brazilian music tradition. While all of Antonio’s albums bear the unique stamp of his personal creativity and singular artistry, and feature many of his own compositions, he has often recently focused upon Brazil’s classic composers as well as the rich musical history and culture that have provided the landscape for one of the world’s most beguiling musical legacies. With his new AAM album Tema, Antonio looks back upon a very important part of that legacy – his own marvelous contributions, dating back to the 1960s.


More than 200 Antonio Adolfo songs have been recorded by his own groups and other major artists – including Sergio Mendes, Stevie Wonder, Earl Klugh, Herb Alpert and many others – and he has also written extensively for films and television in the past 50 years; but it’s been a while since he has chosen to focus an album entirely on his own music. He decided that it was time to do so – this time with an exclusively instrumental Brazilian Jazz approach. Tema is all Antonio Adolfo, brilliantly conceived in the reflection upon his own accomplishments through the prism of his mature focus and wisdom.

“My impression is that when composers are very young they express great spontaneity, but sometimes do not have enough musical maturity to be able to organize ideas as they can when they are more experienced. I have redeveloped my earlier ideas with new arrangements, made new bridges or even new changes and chords for the original melodies. To present all this in a contemporary way required not only a certain amount of creative work but also a wonderful team of musicians that came to join me on Tema."
This outstanding team is comprised of a group of remarkable musicians who have performed with Antonio for a good number of years, and who have helped make the great pianist/composer’s earlier AAM albums, such as Finas Misturas and Rio, Choro, Jazz … so heavily acclaimed.

Marcelo Martins provides the full bodied sounds of his flute and soprano sax, while Leo Amuedo and Claudio Spiewak contribute stunningly seamless interplay on electric and acoustic guitars respectively. Jorge Helder anchors the core of the music with his deeply resonant and flawlessly musical double bass, while the exhilarating intensity and impeccable rhythms of Rafael Barata on drums and percussion are further enhanced by the equally inspired percussion of Armando Marçal - and percussionist Hugo Sandim on one track.

Despite the highly personal focus of this project, Antonio’s generosity, crystal-clear vision and captivating arrangements provide the ideal context for the ensemble synergy to play its essential role in making this music everything intended by the leader. There is such a powerful group dynamic that the solos emerge from the ensemble interplay in a spontaneous and organic fashion as though nothing else could possibly be more appropriate at that particular moment of time. The solos are concise, splendidly structured and always in the moment, contributing imaginatively to the story being told, never allowing the virtuosity to detract from the thematic content – and always perfectly framed by the supporting ensemble.

The ten compositions were composed as early as 1967 with the earlier ones re-imagined so thoroughly with different melodies and new sections that many of them must be considered new compositions and in some cases have been re-titled. A number of the originals were composed with Brazilian lyricist collaborators Xico Chaves and Tiberio Gaspar, but are transformed as instrumental versions here. The collaborations with Chaves resulted in Natureza (Nature) and Todo Dia (Everyday). Natureza depicts its subject matter so viscerally that you can almost smell the fragrance of greenery in the air of mystery surrounding Martins’ flute buoyed by Barata’s various drums. Todo Dia’s deliciously suspended theme is sinuously played by Martins on soprano saxophone and is further enhanced by his coiling, serpentine solo.

Martins’ soprano is also the voice on Sao Paulo Express, a smoldering piece in locomotive/Baião drive with solos of blazing Amuedo melding into blistering Spiewak, riveting piano and soaring soprano. High energy is also the mode for SamboJazz, co-written with Claudio Spiewak, eliminating the drum set and acoustic bass and featuring Antonio on both acoustic and electric piano. Opening and closing with Carnival-like samba heat, Marҫal sets the mood for the three drummers and both guitarists to lay down the raw primitive rhythmic fire over which Antonio and Leo burn. The opening track, Alegria For All (Joy For All) is a surging excursion evoking the all night dance parties that traditionally take place in Northeast Brazil during the winter months of June and July.

The music moves to the other end of the emotional spectrum with the ethereal calm and hypnotic loveliness of Alem Mares (Beyond Seas). The original version was written in1969 to celebrate the conquest of space, but here Antonio shifts the emphasis to the sea, creating a sumptuous aura somewhat reminiscent of Herbie Hancock’s classic Maiden Voyage. Marked by a sparkling piano solo, it culminates in a luminous drum solo amidst shimmering flute and mesmerizing guitar touches. Gentility is also the texture for Trem de Serra (Hillside Train) like a desert flower whose petals possess a beauteous delicacy, but also a protective edginess, all supported by a rhythm section that is controlled and steady, but with an inner fire that seems always on the verge of eruption.

The Moorish influence upon Portugal that their people brought to Brazil is reflected on the medium tempo Phrygia Brasileira, structured upon the unusual Phrygian scale. It opens with Martins’ solo flute touching exotically upon the Navajo flute/Japanese shakuhachi styles and features lush piano, vibrant bass and gliding flute solos. Moody rubato flute winsomely introduces Melos interwoven with piano and guitars before melding into a gentle Bossa-ish groove that doesn’t in any way undermine the poignant beauty of the ballad.

Tema Triste was a Samba-canção (sort of a Brazilian bolero) when Antonio wrote it with lyricist Gaspar in 1967. It is reincarnated here as Variations on a Tema Triste, a breathtaking solo piano interpretation that fittingly closes this extraordinary album on a most exquisite note.

“The Portuguese word ‘tema’ is usually translated as theme, tune, melody or song; but in this title I want to evoke a sense of a musician inviting others to play. That’s the way jazz players mean it in Brazil."

The musicians here all accepted that term in exactly the way Antonio meant it… and they delivered in enthusiastic fashion, helping to create another wonderful album in the brilliant legacy of Antonio Adolfo.