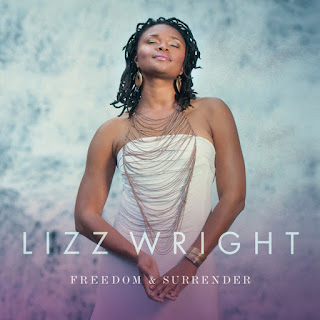 Five years after the release of her critically acclaimed, gospel-laden disc, Fellowship (Verve), Lizz Wright makes her Concord Records debut with the powerful Freedom & Surrender, set for release on September 4, 2015. The 35-year-old singer-songwriter – renowned for her earthy alto voice and emotive yet straight-forward vocal serenading – teams with four-time GRAMMY-winning bassist and producer Larry Klein, who’s best known for his work with such leading lights as Joni Mitchell, Madeleine Peyroux and Tracy Chapman.

Wright enlisted Klein based upon the recommendation of trusted colleagues. Already a fan, she was well aware of his production brilliance, particularly through his work with strong-minded women artists. “We talked over the phone; then we met and did as much talking as we did laughing,” she recalls. “I don’t laugh to just mess around and make people feel good; I laugh because I actually get you. Just the fact that I felt that way with him – I just said, ‘OK, we’re cool.’”

Freedom & Surrender was initially supposed to be a disc of mostly cover-songs, centered on themes of “the circuitous dance of love.” Instead, it became the very opposite – an album of mostly originals – while keeping the initial theme intact. Wright explains, “There’s a time for everything. There’s a time to do cover-song records, which can be like sharing good homework after doing really beautiful research. It can be amazing and very creative in that way. But I just knew it wasn’t time for me to be doing that. I had to prove it and buckle down and make it happen.”

Without a doubt, Wright certainly made it happen with Freedom & Surrender, her sexiest, most sensual album yet. She wrote ten of the disc’s 15 songs, six with Klein and Batteau. The three penned “The New Game” – the disc’s original working title – a rollicking, country-blues ditty with poetic lyrics and verses. The album as a whole touches upon fresher emotional terrain, especially the ethereal, acoustic guitar and Hammond organ-powered “Somewhere Down the Mystic,” the beautiful lament “Here and Now,” (which was inspired in part by the passing of Maya Angelou), the salty and spiteful “You” and the tender R&B ballad “Blessed the Brave.”

Written by Wright, Klein and celebrated songwriter J.D. Souther, “Right Where You Are” is a mesmerizing love slow jam featuring Wright in an amorous duet with Gregory Porter, while “Real Life Painting,” written by Wright and Maia Sharp, is a bucolic evocation about dwelling in the momentary carnal bliss of a love affair.

Souther invited Wright to his small farm in Nashville for a writing session where she recalls playing a lot of piano in his barn. “I gave him a few chords and turned them around into something that we liked. I didn’t think he was going to do anything with them but then he sent me part of the song all the way through to the B section,” Wright recalls. “I respect his clarity and speed.”

Wright was also delighted to have the song feature Porter, whom she toured with in 2013. “The song is very tender and slow. To trust him with that was easy; to hear him move through a suspended, vulnerable space, you can get into the machinery of his voice,” she offers.

Wright is equally enthusiastic about her writing sessions with Sharp, which yielded “Real Life Painting,” containing reflections with cinematic-like qualities. “She is a real fast writer and a wonderful guitarist,” Wright notes.

On “Freedom” and “Surrender” – two songs which bookend the disc – Wright reconnected with Toshi Reagon, who played tremendous roles on her three previous discs – Dreaming Wide Awake (2005), The Orchard (2008) and Fellowship (2010). The gentle yet lusty waltz “Surrender” showcases Wright in a seductive splendor, while Reagon’s declarative, funk-driven “Freedom,” displays Wright in a feisty independent mode. ‘Freedom’ is so unapologetic; it has weight to it that differs from the other songs,” Wright explains. “Larry totally got it; he thought the song was just killing. There’s something about Toshi in which she always calls my spirit to be true in whatever I do.”

Jesse Harris, another longtime collaborator of Wright, co-wrote the lulling, erotically charged ballad “The Game” and the slinky “Lean In,” which moves to a midnight groove that Marvin Gaye might have concocted with Leon Ware.

When it came to covers, Wright chose wisely. She slows the Bee Gees’ 1967 ballad “To Love Somebody,” to a smoldering crawl that maximizes both her gorgeous voice and the song’s pleading lyrics. On bonus track Ewan MacColl and Peggy Seeger’s classic “The First Time Ever I Saw Your Face” – a song made famous in 1972 by Roberta Flack – Wright delivers a haunting, almost noir-ish interpretation. And on Nick Drake’s immortal folk classic, “River Man,” Wright uncoils newfound emotional clarity through her mesmerizing delivery and the spectral arrangement, which also features noted German trumpeter Till Brönner blowing a blustery solo.

Wright has reached new heights of singing and songwriting, and has delivered an album destined to become a classic.