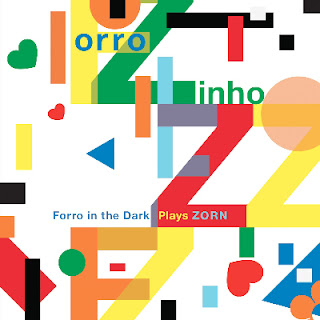 One of the most exciting bands to come out of the wild late night Nublu scene in the East Village, Forró in the Dark combines the driving dance rhythms of forró from Northeastern Brazil with rock, jazz, psychedelia, folk and more.  Together since 2002, the collective of New York based Brazilian ex-pats Mauro Refosco (zabumba, percussion), Guilherme Monteiro (guitar) and Jorge Continentino (pífanos, flutes, saxophones) have collaborated and performed with a wide variety of artists including David Byrne, Red Hot Chili Peppers, Thom Yorke’s Atoms for Peace, Bebel Gilberto, Gal Costa and many others.

After releasing two albums of original material, Bonfires of Sao Joao (2006) and Light A Candle (2009), the time was ripe for Forró in the Dark to reconvene and try something out of the box; a cover record of the famous American avant-garde composer, arranger, producer, saxophonist and multi-instrumentalist John Zorn.  Zorn worked with the band to hand pick the material, composed two new pieces for inclusion on the album, and will release it on his cutting edge record label TZADIK in July 2015.  Producer Jesse Harris utilized Refosco’s Bushwick, Brooklyn studio for the majority of the recording, and special guests include Brazilian piano legend Marcos Valle (a dream come true for longtime fan Zorn), bassist Rea Mochiach, accordionist Vitor Gonçalvez, and vocalist Sofia Rei.

On this exciting new project Forró in the Dark takes on some of John Zorn’s most lyrical and grooving compositions to create a charming album of Brazilian-tinged dance music.  Endlessly listenable, this is a record filled with catchy hooks, burning solos, driving rhythms and infectious Zorn melodies, new and old.  The band has also finalized an album of original material, recorded in Rio de Janeiro, slated for release in 2016.