Take 6, the most awarded a cappella vocal group in history with 10 Grammy Awards has signed with Sono Recording Group (SRG) to deliver a new record in 2016 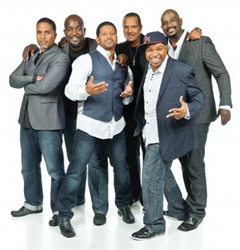 Take 6, the most awarded a cappella vocal group in history with 10 Grammy Awards, 10 Dove Awards, a Soul Train Award, and 7 Downbeat Awards has signed with SoNo Recording Group to deliver a new album in 2016. Producing the album will be Ross Vannelli, Vice President of A&R for the label. SRG will distribute the album internationally through its affiliated partners ILS Group and Universal Music Group.

The new album will be released in the spring of 2016 with the first single issued by the end of the year. Fans of the group can look forward to a contemporary record of exciting new material with every hallmark of the classic Take 6 sound. Songs for the record are being contributed by a diverse group of songwriters.

Claude Villiani, SoNo Recording Group, President and Founder: "We are proud to welcome Take 6 to the SRG family. We have a magnificent team starting with the members of Take 6 themselves, their management team Ed Keane Associates, our distributors ILS Group headed by Dominique Zgarka, and Universal Music Group. Of course we have Ross Vannelli and his unparalleled writing team. We look forward to delivering an outstanding record."

Take 6 (Claude McKnight, Mark Kibble, Joel Kibble, Dave Thomas, Alvin Chea and Khristian Dentley), has been heralded by none other than Quincy Jones as the"baddest vocal cats on the planet!” Their uniquely cutting-edge style is comprised of six virtuosic voices united in crystal clear harmony, against a backdrop of syncopated rhythms, innovative arrangements, and funky grooves. All of this bubbles into an intoxicating brew of gospel, jazz, R&B, and pop. Take 6 are quintessential a cappella.

The group, considered torchbearers for an entire reemergence of a cappella as a musical movement, has been performing together since their days at Oakwood College in Huntsville, Alabama in 1980. Their debut album scored two 1988 Grammy Awards and landed in the Top Ten Billboard Contemporary Jazz and Contemporary Christian Charts.

27 years later, the most talked-about vocal group of all time, Take 6 is in greater demand than ever, selling out shows all over the world. They have performed on Saturday Night Live, the Oscars, the Grammys, had the honor of performing for four sitting U.S. Presidents, and appeared at the Democratic National Convention. The group, which has inspired and been a founding influence to a generation of recording artists including Boys to Men and 'N Sync, has collaborated with a who’s who of artists – including Stevie Wonder, Gordon Goodwin, Don Henley, Whitney Houston, Al Jarreau, Quincy Jones, kd lang, Queen Latifah, Brian McKnight, Luis Miguel, Marcus Millier, Joe Sample, Ben Tankard and Cece Winans.