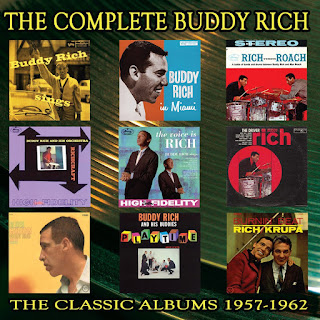 The five discs that make up this boxed set feature the man s complete recorded output across the period many fans consider to be Buddy Rich s most creative and inspired. Containing 11 remastered, original albums from the period 1957 - 1962, the music here contained illustrates perfectly this maverick musician s unrivalled talents which continue to delight jazz fans old and new.

By the second half of 1950s, Buddy Rich was already an established figure in the world of jazz. Often credited as one of the finest drummers in the world due to his virtuoso technique, power, groove and speed, by 1957 Rich had a considerable number of critically acclaimed albums to his name, on which he featured as either sideman to some of the most highly-regarded musicians of the era, as bandleader or as co-leader. By this point he had shared the stage or recording studio with the likes of Louis Armstrong, Ella Fitzgerald, Oscar Peterson, Lester Young, Gene Krupa, Nat King Cole, Lionel Hampton and Harry Sweets Edison among others, with many more to follow in what would be a long and prestigious career.

Rich began 1957 with one of the more unusual recordings in his catalogue; Buddy Rich Just Sings (Verve). The album was one of a few in his body of work for which he stepped away from the drums to take on his less familiar, but still notably skilled, roll as vocalist. With 1959 s The Voice Is Rich (Mercury, 1959) he went even further into similar territory, with drums now completely abandoned and orchestral backing replacing the more typical jazz set-up. This move however did not mark neither the end nor any kind of hiatus from his rhythmic leanings, as the era was indeed studded with classic LPs on which Buddy continued to provide the backbeat.

From the early 1950s, Rich had performed regularly with trumpeter Harry James, a partnership that would continue intermittently until 1966. Echoing his drum battle with Gene Krupa, Rich teamed up with another of the day s most respected skin-thumpers, Max Roach, to record Rich Versus Roach (Mercury) in 1959. A truly inspired and unique recording, the album features the twin drummers augmented by the combined efforts of their respective bands. In 1966 Rich formed The Buddy Rich Big Band, achieving great success in an era where groups of said format were suffering a sharp decline in popularity. Their first album, Swingin New Big Band (Pacific Jazz, 1966), contained a highly regarded interpretation of Leonard Bernstein s West Side Story, which blended Rich s drumming into Bernstein s complex arrangement with such majesty it quickly became one of the group s signature pieces. In addition, the group backed legendary Rat-Pack performer Sammy Davis, Jr. on his The Sounds Of 66 (Reprise, 1966).

The Big Band s 1969 album Mercy, Mercy (Pacific Jazz), recorded at Caesars Palace, Las Vegas, would later be considered one of the group s greatest live recordings. Although officially disbanding in 1974, The Buddy Rich Big Band would continue to reunite and perform sporadically for the rest of Rich s career. Despite his age, Rich s drumming ability lost little of its pace or power towards the end of his life. The 1980s saw the emergence of a series of infamous bootlegs known as The Bus Tapes, a collection of rants and tantrums secretly recorded by pianist Lee Musiker. Among the cognoscenti Rich's short temper was almost as famous as his musical ability and it had allegedly resulted in his being slapped by Dusty Springfield and his threatening to fire trombonist Dave Panichi for wearing a beard. Despite this, composer, singer, producer and lifelong friend David Lucas insisted that "Rich had a soft heart underneath it all. His favourite song was 'It's Not Easy Being Green'." Sadly, Buddy Rich passed away following complications from surgery on 2nd April, 1987, at the age of 69. ~ Amazon