Jeremy Rose & The Earshift Orchestra | "Disruption! The Voice of Drums" 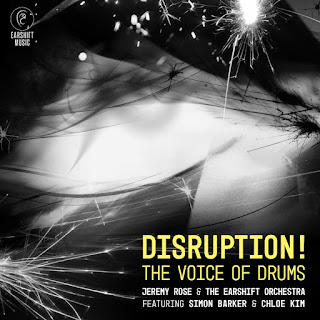 Jeremy Rose is a two-time ARIA nominated Eora/Sydney based woodwind specialist, composer, band leader, label and festival director, whose music explores the intersection of socio-culture and genre, creating interesting and unique collaborative projects that span the globe. His music has been performed at festivals around Australia, Europe and the UK, has toured extensively in Australia, in Europe recently with guitarist Kurt Rosenwinkel and The Vampires in collaboration with Lionel Loueke.

On October 14th, Jeremy Rose and the 8-piece Earshift Orchestra bring a thrilling tribute to the timeless, visceral and disruptive power of the drum - Disruption! The Voice of Drums, featuring extraordinary drum virtuosi Simon Barker and Chloe Kim. Premiering to wide acclaim at the 2021 Sydney Festival, this major new work offers an opportunity to reflect on the current disruptive challenges we face, with bush fires, a global pandemic, civil unrest and a growing ecological disaster.

Alongside the voice, the drum is the most elemental form of human expression. From prehistory to the present we have used drums to conjure spirits, create ecstatic states of mind, bring communities together and put fear into the hearts of enemies. “I have always been fascinated by the power of drums,” explains Jeremy. “Drums can create ecstatic states of mind and alter our brain waves.” Drums have been used in ancient rituals, religious ceremonies and to instill discipline in the military. More recently, drums have been the élan vital of music whose purpose is to disrupt, featured in protest songs across the world from Hong Kong, to Russia and the United States.

Versed in jazz, drummer Simon Barker has played with many international touring artists including Tim Berne, Marilyn Crispell, Joe Lovano, Sheila Jordan, Gary Smulyan, John Hicks and Carlos Ward. He has spent years investigating traditional music from Asia and the Pacific. His collaboration with Korean Pan Sori singer Bae Il Dong and trumpeter Scott Tinkler is internationally recognized. “Simon has developed ways of playing things on the drums that are technically impossible for ordinary drummers,” explains Jeremy. Another drummer has emerged in recent years that has been one of the first to embrace Simon’s ideas whilst creating her own distinctive voice - Korean-born Chloe Kim, finding a musical path of discovery of rock, hip-hop and jazz through her Korean-informed approach.

“In searching for material to draw upon for a possible collaboration between the three of us,” explains Jeremy, “I turned to their respective solo drum music to arrange music for; Chloe’s Right Turn, and Simon’s Urgency! (Vol.1 & Vol. 2), On Running, 1 & 2, amongst others.” This body of work highlights their respective musical backgrounds whilst demonstrating a quest to create new languages to themselves. In particular, Simon’s use of dense, fast rhythms and rhythmic variants (‘entangling’) posed exciting compositional opportunities. Disruption! was therefore begging to be created.

“The challenge of composing music for solo drums was that harmony and melody typically dictated the direction of the music and how I wrote for the ensemble,” explains Jeremy. “For Disruption!, drum parts became the foreground, with the other instruments moving in and out of focus.” Harmony and chords often had the reverse effect of diminishing rather than adding to the music. “I navigated this by creating layers of sound that need not lock in with the drums. These layers served to enhance and provide space for Simon and Chloe’s performances.”

The music of Disruption!, along with powerful images by video artist duo Peachy Mosig, provides a soundtrack to the year that’s been – 2020. Whilst challenging us all, we hope this work offers an opportunity to reflect.