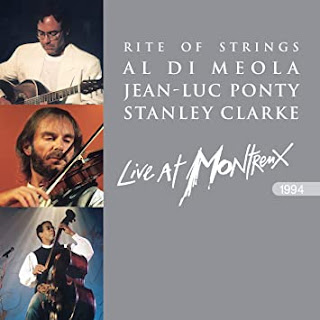 Mercury Studios is proud to release for the first time on CD Rite Of Strings: Live At The Montreux Jazz Festival 1994 on October 28. Previously released on DVD in ’05, the brilliant interplay between three virtuoso musicians—Al Di Meola, Jean-Luc Ponty and Stanley Clarke—is on full display. The nine-track two-CD set features such deep cuts as “Renaissance” and “Memory Canyon” along with six others. Violinist Jean-Luc Ponty had never played with guitarist Al Di Meola. Their special on-stage chemistry is all over this sterling performance. Di Meola—dubbed “Best Jazz Guitarist” by Guitar Player magazine for five consecutive years (’77-’81)—is on fire. His solos on acoustic guitar sting in a non-stop dizzying flurry of notes while bassist Clarke slides up, over and underneath his every riff with alarming dexterity. The absence of drums frees each master musician to fill in the spaces with pure technique. At 21, Clarke first played Montreux with Stan Getz. Later in his career, his “slap” technique became a funk standard. His solo School Days, in ’74, cemented his rep as a fusion icon. Jean-Luc Ponty exploded out of Europe to join Frank Zappa and Mahavishnu Orchestra. Known for being the first violinist to fully integrate electronics and effects into his playing made him the Jimi Hendrix of the Violin. Here, in an acoustic format, his playing is sweet, swift and fully supportive. The CD starts in the key of Coltrane: “Song To John” a Clarke/Corea composition from Clarke’s ’78 Modern Man. Clarke’s “La Cancion De Sofia” is a portend of things to come as it would prove to be the highlight of this trio’s subsequent album together a year later. Solo spots then ensue climaxing with Ponty’s “Eulogy To Oscar Romero” off his 1983 Individual Choice. A folkloric South American groove permeates Di Meola’s “Chilean Pipe Song” as all three spiral upwards to a whirlwind conclusion. Since the spectral presence of Chick Corea hangs over this night, a second version of “Song To John” ends the proceedings as guest pianist Monty Alexander perfectly recreates what Corea himself might have added. But the crowd hadn’t had enough, demanding a second encore “Indigo.” 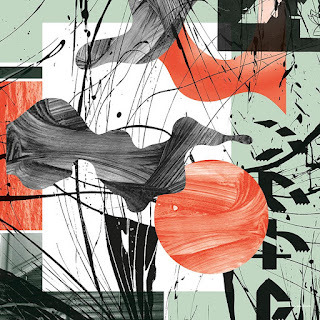 Volume 2 in the series happens with Carl Stone, a legendary figure in creative music. His career spans decades of unlimited musical innovation. Stone’s recent output on Unseen Worlds, the label who has also been instrumental in issuing some of his remarkable earlier work, ranks among the most original art of our time and renders notions such as ”genre” virtually meaningless. Here, We Jazz originals by Terkel Nørgaard, OK:KO, Jonah Parzen-Johnson and more are met here with a fresh sense of discovery, spun around and delivered ready for the turntable once again. Carl Stone says: ”It was wonderful that We Jazz gave me carte blanche to work with any materials from the set of ten releases in its catalog. This freedom to work with everything could have been a mixed blessing though, as it could be a challenge to try to deal with so much musical information. In the end I did what I almost always do: Let my intuition be my guide and to seize upon any musical items that seemed to fit into an overall approach.” ”To make a new piece I usually start with an extended period of what really is just playing, the way a child plays with toys. Experimentation without necessary expectation, leading to (hopefully) discovery of things of musical interest, then figuring out a way to craft and shape these into a structured piece of music. Each track uses a different approach, which I found along the way during this play period.” This conceptual approach becomes complete with the design, in which album graphics are treated in a similar fashion, reworking what’s there. This time around, the artwork is reinvented by Tuomo Parikka, a great friend of the We Jazz collective and a regular cover collage contributor for the We Jazz Magazine. 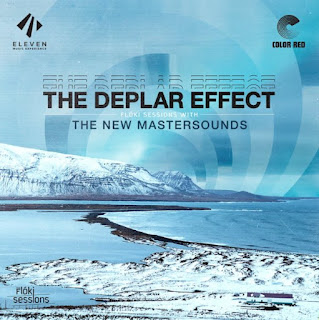 It's hard to go wrong with the New Mastersounds – and even after so many years, and so many records, these guys are still totally at the top of their funky game – one of the tightest, hardest, sharpest combos around – one of the first in the 21st century generation of deep funk acts, and still one of the best! Eddie Roberts, as always, is a monster on guitar – both in terms of his solos and his sense of riffing rhythms – and the group features plenty of C3 organ and other keyboards from Joe Tatton, plus some guest vocals on a few cuts from Lamar Williams. Titles include "Gonna Get In My Way", "Hot Tub", "Let Me In From The Cold", "Georgie Famous", "Meet You In The Sunshine", "Northern Lights", "Before", and "High On The Mountain". ~ Dusty Groove