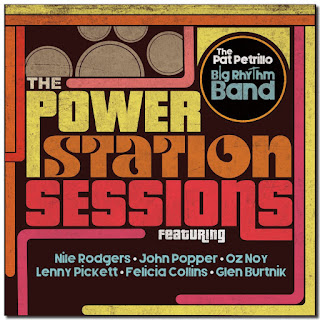 World-renowned drummer Pat Petrillo showcases the vast spectrum of contemporary groove music on the second album by his explosive Big Rhythm Band. Due out October 7, 2022 via Autumn Hill Records, Petrillo’s jubilant The Power Station Sessions runs the gamut from New Orleans R&B, to blues, and funk– though this Jersey boy inevitably lends a distinctive East Coast swagger to the whole affair.

Pat Petrillo has long been recognized as one of the most versatile and prolific drummers on the scene. He has worked with a wide array of artists from diverse genres, including Patti LaBelle, Gloria Gaynor, Chieli Minucci, and Ed Hamilton as well as numerous Broadway shows, from A Chorus Line, to Newsies, to the national tour of Dreamgirls.

“Although it’s a Contemporary Instrumental record, I would almost call this an Americana record,” says Petrillo. Although that term is usually associated with country and folk music traditions, the drummer has a more continent-spanning definition of the genre.

“The Power Station Sessions is a potpourri of truly American groove styles. These songs are built on rhythms from around the country, from New Orleans Mardi Gras to R&B, funk, blues, rock, and soul. I have a lot of influences, and they are reflected on each track. But it's also got a real distinctive New York/New Jersey edge. For drummers especially, it’s a real treat. It smacks you in face with flavor from the start. It sort of defies categories.”

Everyone from Bruce Springsteen, Billy Joel, and Bon Jovi, to Madonna, Paul Simon, Steps Ahead, Chic, David Bowie and Lady Gaga (the list could go on) has recorded at the Power Station – including the supergroup that borrowed its name. While the space changed hands in the late ’90s and was rechristened as Avatar Studios, it recently reopened as the Power Station under the auspices of Berklee College of Music.

“Some of my favorite records over the years were cut there,” Petrillo says. “The studio has a lot to do with the vibe of a record. It’s the incubator of the sound. The wood that it’s built with, the flooring, the soaring ceilings, the sound absorption all come together to create the quality of that sound. The room is everything…and this studio has some serious mojo!”

Add to the mix veteran engineer Roy Hendrickson, who has his own history with the Power Station, and you have a session that bristles with vintage NYC attitude while sounding utterly contemporary. Witness the bravado shuffle of Petrillo’s arrangement on Billy Joel’s “Big Man on Mulberry Street,” boasting a groove so wide it would fill that Manhattan thoroughfare. He learned from longtime Billy Joel drummer Liberty DeVitto that the original song was laid down at the Power Station – and Hendrickson was an assistant on the session. “I loved Liberty’s playing on that record, and I just wanted to do it justice, and in the same room!”.

The album opens with Petrillo’s funky “48th Street,” the perfect vehicle for Chic mastermind and guitar wizard Nile Rodgers. It’s the debut single that is sure to light up the airwaves. “Between the music stores, record shops and the recording studios, 48th Street was where music lived,” the drummer explains. “It’s an homage to that old school 70’s New York City vibe that I wanted to recapture, and I had Nile Rodgers in mind from the minute I wrote this track.” Long time keyboard veteran Chris Fischer also helped arrange the track.

Oz Noy’s virtuoso guitar work weaves elegantly through a revamped, swing funk version of the iconic “Black Cow” by Steely Dan, while Petrillo also takes the spotlight with a one take drum solo on a great arrangement of Earth, Wind & Fire’s “Runnin’.” Stevie Wonder’s classic “Knocks Me Off My Feet” is given a gorgeous ballad treatment, graced by Tom Timko’s wistful soprano saxophone.

Petrillo’s other original compositions for the album reflect some of his greatest passions. The tense “Global Warming” confronts the accelerating climate crisis by way of reworked compositions by the drummer’s longtime collaborator, late Philadelphia keyboardist Dave Falciani. “Asbury Daze” takes it a bit easier, capturing the sun-drenched whirl of the Jersey Shore, with its powerful horn riffs reminiscent of The Asbury Jukes, with the help of Felicia Collins’ breezy, melodic fretwork and Jersey native John Popper’s thrilling harmonica solo. “I wanted to take the listeners down the shore, smell the boards, the sausage and peppers, and have fun,” he quipped.

“I have to include a Beatles song on any record that I do,” Petrillo insists. “I’m a huge Beatles aficionado and a Ringo fan since I was young.” The Big Rhythm Band’s pugilistic and rockin’ rendition of “It Won’t Be Long” features regular Petrillo collaborator Glen Burtnik on vocals, as well as Popper. The album ends where American music begins, in New Orleans with the Mardi Gras Indian chant “Hey, Pocky Way,” best known for The Meters’ immortal version (explicitly referenced during B.D. Lenz’s slide guitar solo).

At the root of it all is Pat Petrillo’s trademark groove, electrifying enough to light up the Power Station itself. In addition to being an in-demand live and session drummer, he’s also an esteemed educator who has created popular instructional videos for Hudson Music, and the Drumeo website. Petrillo endorses Ludwig Drums, Zildjian Cymbals, Evans Drumheads, Vic Firth Drumsticks, and Earthworks Microphones.