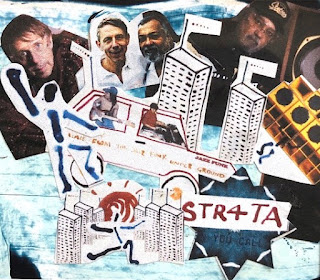 STR4TA announces next album STR4TASFEAR, out 11th November via Brownswood Recordings. The announcement comes with the release of the first single from the album ‘Turn Me Around’.

Gilles Peterson and Jean Paul “Bluey” Maunick’s sophomore STR4TA album is a sumptuous mixture of twanging basslines, spacey synth melodies, clicking beats and wispy, ethereal voices that sit perfectly in the brand new music world it’s part of. Inspired by the ground-breaking chapter in the story of homegrown music; Brit-funk; and encapsulating the formative years of both Gilles and Bluey; new album ‘STR4TASFEAR’ will be released on digital, CD & 12” LP formats with special edition white 12” LP.

Gilles says: “STR4TASFEAR is a continuation from our first project, celebrating the ground breaking Brit-Funk era of the late 70s/ early 80s while continuing the story with the rise of the drum machine; paying homage to the Acid Jazz and Electro Soul that followed and the evolution that inspired club culture and new Jazz of recent times. For me it’s a record of parallels, not only in music but a lot of the issues we are experiencing today began in that Brit-Funk era. The parallels in the political landscape of that time and today are poignant and the moment of overall change we are living in is reflected in this record. Bluey is a significant executer of exhibiting the important social questions through music from a Black British perspective and it’s an honour to work with him.”

For this new set, they’ve got a few like-minded souls along to join the party to connect legacy with a new generation of innovators making waves in the music scene. As a core concept of the album, nostalgic reflection meets a pivotal desire to celebrate the present moment, expressed through key features on the record. Namely, multi-talented neo soul Godfather Omar, who in a shock plot twist, was enlisted to lay down his intricate wonky synth basslines on ‘Why Must You Fly’. The legacy family collaborations ensue with celebrated vocalist, Valerie Etienne, on ‘Find Your Bounce’ co-written by Rob Gallagher (Galliano, Talkin’ Loud) emulating Brit funk’s first bounce.

Extending the family, catapulting STR4TA to a cosmic contemporary plane, is free-spirited musical polymath, Emma-Jean Thackray laying down her refreshing, vocals and production acumen on ‘Lazy Days’. Also welcomed into the fold and garnering the admiration of Gilles and Bluey over his illustrious career, is Floridian trumpeter/vocalist Theo Croker, who encapsulates the innovation of future jazz with the soulfulness of a bygone era on ‘Soothsayer’ and ‘To Be As One’. Representing the dynamic US influence from the birth of Brit-funk and the new wave of multifaceted, jazz-trained artists exploring unchartered soundscapes. Plus Brighton duo Anushka, jump on ‘Bad Weather’, whose melting electronica sound gleefully displays its roots from that aforementioned era.

The epicentre of 'STR4TASFEAR’ still remains the ‘meeting of minds’ and treasured friendship between the band’s founders, a solid production duo whose clearly defined roles compliment and inspire each other. Gilles Peterson as executive producer, sonically enriching the production process with his extensive and encyclopaedic knowledge from Brit-funk and Electro-soul of the late 70s/ early 80s to ushering in a new wave of musicians over his considerably lengthy career as a DJ, label owner and broadcaster. With highly acclaimed musician and producer Jean Paul “Bluey” Maunick feeding the creative flow. Alongside the invaluable contribution of Mo Hausler, who was instrumental in adding to the soundscape of the album. The vision is completed by the magic touch of legendary keys/piano player Peter Hinds (Atmosfear, Light of The World, Incognito), appearing throughout the record, and is at the pinnacle of paying homage to the incredible pioneering work of bands such as SunPalace & Freeez, paving the way of UK electro soul for artists like Total Contrast & Stephen Dante (produced by Bluey in the mid 80s). This sound is now being emulated by contemporary producers like Dâm-Funk, Zopelar & SpaceGhost to name a few.

STR4TA is the new wave jazz funk project pioneered by DJ, broadcaster, producer and record label owner Gilles Peterson and legendary musician and Brit-funk steward Jean-Paul ‘Bluey’ Maunick of Incognito, Freeez and Light of the World. Long-time friends and collaborators, STR4TA sees them mine new musical possibilities inspired by a shared formative era. Their debut album ‘Aspects’ was released in March 2021 to a rapturous reception, and was the first material that Maunick and Peterson have released together in over a decade. With standout tracks ‘We Like It’ achieving over 1 million streams on Spotify, ‘Rhythm In Your Mind’ exceeding 12 weeks on Jazz FM’s playlist, and a remix EP featuring Melé, Dave Lee, Greg Wilson,  Dave Aju & more released at the end of 2021. Heavily supported by BBC 6Music, The Guardian, Wax Poetics, The Vinyl Factory, Crack, CLASH, Télérama (FR), Radio Nova (FR), KCRW (US), Rolling Stones Italy & Japan. STR4TA have performed electrifying live shows at We Out Here (UK), Primavera Sound (Spain) and headline show at The Jazz Cafe, London.