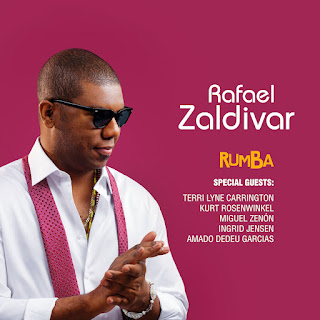 Cuban pianist, composer, artistic director, and educator Dr. Rafael Zaldivar has made an exceptional contribution to jazz music, receiving great acclaim from Berklee College of Music, JazzTimes and Downbeat magazine along the way. With his  new album RUMBA, Zaldivar continues to build upon his previous work, combining the holistic vibe and rhythmic circularity of Afro-Cuban music with a jazz sound. Zaldivar’s spirituality illuminates RUMBA, opening new doors to an endlessly expressive musical universe. The orchestral lyricism, intricate Afro-Cuban rhythms, and twentieth-century musical textures reveal Zaldivar’s reflective approach as the center of his compositional discourse. The term RUMBA refers to the social gatherings of the black community in Havana, Cuba. At the beginning of the twentieth century, these groups met to celebrate and praise the deceased in ceremonies full of song and dance. RUMBApromotes social interaction, cultural exchange, and the transmission of Africanism, all of which feeds into the sound of this album. Zaldivar performs his RUMBA with a world-class ensemble comprised of many of jazz and Afro-Cuban music’s leading lights, including Grammy winning and nominated artists Terri Lyne Carrington, Kurt Rosenwinkel, Miguel Zenón, Ingrid Jensen, and Amado Dedeu Garcias, alongside  many other Cuban, Canadian, and American greats. 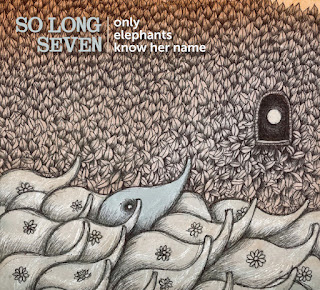 So Long Seven – only elephants know her name

So Long Seven is a delicious mix of jazz, classical, blues, folk, and music from around the world: a funky, relentless force and an atmospheric cornucopia of sound. Nestled in the rhythmic pocket of renowned tabla player Ravi Naimpally, guitarist Neil Hendry, violinist William Lamoureux, and banjoist Tim Posgate  create an aural space without boundaries. This highly skilled quartet references many global traditions – from India, Europe, Africa, and the Americas – constructing a unique and cohesive cultural bridge. So Long Seven has performed at Canada’s top global music venue, Small World Music, and regularly plays concerts at clubs across the country. From a tour of Vancouver Island, to appearances at Victoria Jazz Festival and Ontario’s Hillside Music Festival and Sunfest, the band is truly a national force. The group has also performed internationally, with multiple concerts across Europe. On So Long Seven’s latest recording, frogs, elephants, stars and  the work of indigenous modernist painter Kenojuak Ashevak  all act as inspiration for new pieces. Produced by violinist William Lamoureux, it includes original compositions, as well as his arrangements for string quartet. The song Mara features the exceptional Hindustani vocalist Samidha Joglekar, who frequently collaborates with the band in concert and on record. only elephants know her name explores expansive new musical territory, and is a joyful salve for our complex times.

For Montreal born, Brooklyn based saxophonist Chet Doxas, the visual arts and music are two things that have been present throughout his entire life. The last seven years have found Doxas embracing and celebrating the ways in which the two mediums mingle, and where they intersect. “Quite simply put, when I look at paintings, I hear music,” says Doxas. “This intersection is one that I feel very fortunate to be able to experience and revel in. It is by studying this relationship that I first composed a body of work dedicated to New York City’s Lower East Side art movement of the early 1980s entitled Rich in Symbols. I am now delighted to be able to interpret seven of our national masterpieces from The Group of Seven, Tom Thomson and Emily Carr. In responding to these iconic works, I felt a wide range of feelings and the feeling that surprised me the most was one of respect for our land and how it has helped me get closer to answering the question: What does it mean to be Canadian? While I do not think that there is only one answer to this question, through composing this series of pieces, I believe that part of the answer can be found in the intrinsic role that our great landscape plays in defining our cultural identity.” Doxas composed the pieces for Rich In Symbols IIin the presence of the artwork, manuscript and pencil in hand. The paintings are also an integral part of the music’s live presentation, as the band performs alongside projections of the iconic works. The live line-up consists of Chet Doxas (saxophones, clarinet, field recordings), Jacob Sacks (piano and mellotron), Joe Grass (pedal steel, guitar and banjo), Zack Lober (bass) and Eric Doob (drums and programming.) The album also features  a spoken word poem, read by celebrated songwriter Sam Roberts. 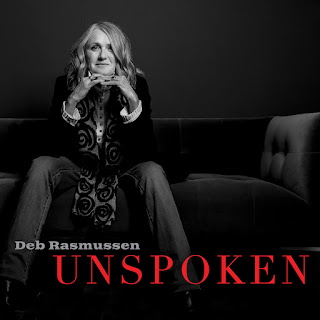 Calgary vocalist Deb Rasmussen’s new album UNSPOKEN first began to take shape in 2019, only a few months before the COVID pandemic brought the world to a halt and reduced Rasmussen’s world to her house and music room. However, the newfound free time that came with the isolation gave her a chance to reconnect with an old love: song writing. After a few months, Rasmussen was inspired to reach out to her frequent collaborator pianist Jon Day, who arranged the new batch of songs, plus a few choice standards. Their  remote collaboration revolved around Rasmussen’s piano, a USB mic, Dropbox and email. This continued for a year and a half until they finally had a chance to play their new repertoire together. Deciding that they had to record, they enlisted Jeremy Coates and Robin Tufts – two of western Canada’s top call musicians – to lend their exceptional skill and sensitivity to the project. UNSPOKEN is a musical and emotional journey that explores the aspects of love that are often left unspoken. In the category of sweet romance, Just My Little Love Song and You Smile and were written by Rasmussen and her life partner for each other. But between infatuation (Darn That Dream), passion (I Hear a Rhapsody) and heartbreak (It Never Entered My Mind), there’s longing and loneliness (Swept Away), temptation (Unspoken), the constant balancing of love versus fear (Front Porch), and the need to draw a line in the sand (In Your Own Sweet Way). The songs explore more than just romantic love. Fly Away is dedicated to the many women who have struggled to hold their families, their work and themselves together throughout the pandemic, digging deeper and deeper inside to find the strength to carry on. Peace, Like a River is about the quest for inner solace when the world seems to be crumbling all around. The album resolves with My Best to You, a simple wish for the listener to find the love that’s best for them, whatever and wherever it may be.