The Chris Parker Trio | "Tell Me" 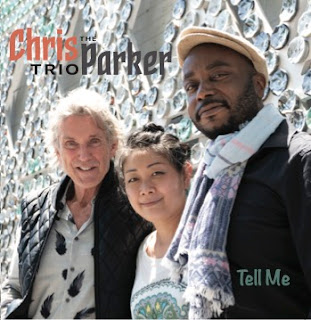 You would be very hard pressed to name an A-list artist from the past fifty years who drummer Chris Parker has not worked with. From Miles, to Grover Washington Jr., the Brecker Brothers, Bonnie Raitt, Carmen McRae, David Sanborn, Freddie Hubbard, Dexter Gordon, Ron Carter, Buster Williams, Pat Metheny, John Scofield, Quincy Jones, Donald Fagen, Aretha Franklin, Billie Holiday, James Brown, and many, many others. Just name your favorite musician, and it’s a good bet Parker has shared the studio and stage with them. Like the best of the best, even in the light of these amazing musical associations which have resulted in multiple platinum, gold and Grammy-winning albums, his humility and desire to keep growing as an artist are intact. “What’s so great about music is that there’s always more to learn and every player is a brother or sister who helps you, mentors you and nurtures you, encouraging your own development and showing you another path you can explore,” explains Parker.

This long road that Parker has travelled on for the past fifty years seems infinite, forever winding its way through one creative tour-de-force after another, and brings us to his latest recording as a leader, Tell Me, marking his third trio album and eighth as a leader, and featuring his longtime working trio of Kyoko Oyobe on piano and Ameen Saleem on bass. Tell Me, available September 30, epitomizes the trio’s collective joie de vivre. It captures the joyful spirit which spread throughout the room at a recent performance. Parker elaborates, “Kyoko’s feet are up off the floor, her stylish black boots bouncing animatedly off the sustain and damper pedals of the acoustic piano, Ameen’s hat is now off and on top of the upright’s neck because the perspiration is flowing so generously after his killer solo on ‘Desaparecido.’” While Parker, seemingly motionless, is once again driving his trio to new musical heights. After years of percolating, he knows how to keep things simmering, seamlessly shimmering and adding muscle to his arrangements and lifting up these talented youngsters with his groove, allowing them to shine brightly. “This album documents the reunion of ‘the trio’ after nearly two years in which everyone’s lives, everywhere, changed dramatically. It was a musical joy and so thrilling to see Kyoko and Ameen after such a long time, and to play new music together again. I get such a kick from both of them while listening to their ideas, their solos and their interpretations of my music, they make me smile,” says Parker.

﻿On Tell Me, eight of the ten tunes are Chris Parker originals, the other two being “Coolypso,” a re-working of Monk’s “Let’s Cool One,” and the Polish folksong, “Dwa Serduzska (for Hanna)” (which translates to, “Two Hearts, Four Eyes). Highlights include the soulful “Minky Don’t You Weep,” which has a pocket as deep as the Grand Canyon, and “Nippon Days Nippon Nights,” showcasing just how slick and propulsive Parker’s playing is, and how in lockstep this trio is with one another. The album proceeds with another home run, “Tophland,” from Parker’s nickname amongst friends, “Toph.” This track really displays how inspiring it can be to hear a musician reveling in his craft with nothing to prove! “West Cornwall Bridge” is a nod to the Northwestern Connecticut town where Parker’s father lives, and also captures the rugged beauty of England’s Southwest coast, while the titled track, “Tell Me,” conjures up the joyful swing of a Big Easy second line in a big way, and means, “Everyone has walked through hell over the past two years, so tell me all your problems, lay it on me, and maybe I can cheer you up or help in some way with your predicament,” says Parker. The last track, “Title Waived,” is, “something special I had an idea for with layers of Steven Bernstein’s wind instruments, David Finck soloing on bass and Chris Biesterfeldt delivering on guitar, with minimal drums from me,” explains Parker. Mission accomplished!

More on Chris Parker: Born in Chicago, Chris Parker was playing drums at age three and began performing his first professional gigs at eleven. At nineteen, Parker began recording and touring with blues great Paul Butterfield and then broke into the NYC studio scene in 1970, recording albums, movie scores and filling the drum chair on Saturday Night Live.