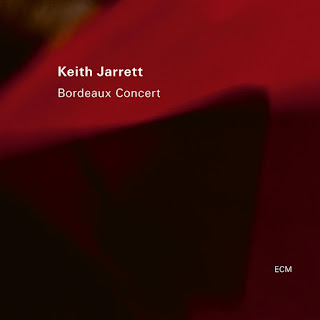 Bordeaux Concert documents a solo performance, the last that Keith Jarrett would give in France, at the Auditorium de l'Opéra National de Bordeaux on July 6, 2016, and finds the pianist at a creative high point.

Each of Jarrett’s 2016 solo piano concerts had its own strikingly distinct character, and in Bordeaux – although the music would progress through many changing moods – the lyrical impulse was to the fore. In the course of this improvised thirteen-part suite, many quiet discoveries are made. There is a touching freshness to the music as a whole, a feeling of intimate communication shared with the 1400 attentive listeners in the hall. This time there is no recourse to standard tunes to round out the performance; the arc of spontaneously composed and often intensely melodic music is satisfyingly complete in itself. In the later concerts part of Jarrett’s achievement as an improviser has been the way in which he has not only channeled the music in its moment-to-moment emergence but implied a sense of larger structure as he balances its episodes and atmospheres.

Reviewing the July 2016 performance, the French press spoke of hints of the Köln Concert and Bremen-Lausanne in the flow of things, and extended sections of Bordeaux Concert are beguilingly beautiful. Tender songs are coaxed from the air, “rousing a community of listening at the edge of silence," as Francis Marmande put it in Le Monde, “an awareness of time out from the noise and weariness of the world.”﻿

Bordeaux’s community of listeners had long been aware of Jarrett’s music. The Nouvelle-Aquitaine capital was one of the first European cities where Jarrett presented his music, as early as 1970 - with his trio, then, with Gus Nemeth and Aldo Romano. He was back in the early 1990s, with the ‘Standards’ trio with Gary Peacock and Jack DeJohnette. The July 2016 concert, however, was his only solo performance in the city (made possible via the Jazz and Wine Bordeaux Festival and its director, Jean-Jacques Quesada).