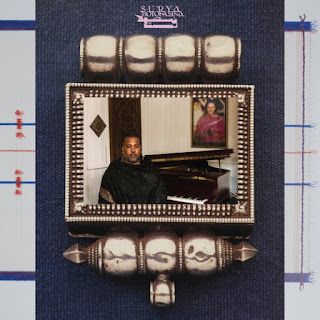 Everyone’s Children is the stunning debut album of spiritual avant-garde music from keyboardist and composer Surya Botofasina, out on Spiritmuse Records. The record combines deep jazz excursions with expansive synth passages and intimate piano turns to create a hypnotic, meditative and devotionally expressive suite that soothes, enriches and uplifts the soul.

Botofasina’s upbringing at the Sai Anantam Ashram in the Southern Californian hills involved daily bhajans (traditional Hindu devotional songs) led by legendary jazz harpist and pianist Alice Coltrane. Her musical and religious teachings continue to have a profound effect on the keyboardist, whose career has since gone on to take in acting stints in the TV series Vinyl and Boardwalk Empire alongside a diverse range of musical collaborations with the likes of Reggie Workman, Joey Bada$$, Gangstarr’s GURU, Amel Larrieux, N’Dea Davenport, Georgia Anne Muldrow, and Miguel Atwood-Ferguson. His work as the Music Director of the Sai Anantam Ashram Singers has seen him tour internationally honouring Swamini Turiyasangitananda Alice Coltrane’s devotional music. “The way I play the piano is not the way my friends play the piano” he says. “It forced me to find the place I truly dwell in - the place between the hip hop and jazz, but based in meditative and long form expressions of my spirit.”

Botofasina’s renown has enabled him to enlist a supremely talented, cross generational group of musicians for the project including major LA mainstays such as multi-instrumentalist and bandleader Carlos Niño –– who also produced the album –– jazz singer Dwight Trible, and indie folk vocalist Mia Doi Todd. Brilliantly gifted guitarist Nate Mercereau, saxophonist Pablo Calogero, and drummer Efa Etoroma Jr., round out the guest collaborators alongside Botofasina’s mother, the harpist Radha Botofasina, a key musical disciple of Alice Coltrane’s during her Ashram years and a hugely formative influence on the keyboardist.

Ten years in consideration, the album’s genesis lay in Botofasina and Niño’s long-running creative partnership. The pair first linked up through Niño’s Build An Ark jazz ensemble, by the recommendation of Atwood-Ferguson, in 2011 and –– after Niño suggested recording a Surya-lead project, the idea began to solidify with a series of collaborative concerts in 2018 (still on-going,) that engendered a deep musical bond. Recorded by Jesse Peterson in 3 joyous sessions last year in Glendale, California, the results are grounded in the ashram music that Botofasina grew up with and present his own unique jazz-influenced take on devotional sounds.

That vision achieves heady form in the shape of album opener "Surya Meditation", an epic twenty-seven-minute duet with Niño built around Botofasina’s assorted keyboard textures. Synths hum hypnotically, softly patter like raindrops or drift by like clouds on a hazy summer’s day. Niño’s subtle percussive accompaniment offers a gentle sense of otherworldliness throughout a contemplative, meditative and stunningly beautiful piece that offers feelings akin to floating gently across water. “I knew when it was happening that it would be the focal point, the opus, the centre of this project” says Niño of the recording.

The title track, "Everyone's Children" follows. Featuring Mia Doi Todd –– whose pregnancy at the time of the recording inspired its name –– the track blends her dreamlike singing with the buzzing swoop and swirl of a synthesizer –– a recognizable throwback to the Sai Anantam Ashram devotional sound –– alongside gentle piano runs. Begun in reflective mode, "Sun Of Keshava"’s synthesizer textures build in warmth towards a denouement of radiant keyboard notes that recall the beauty of a summer sunrise.

The cascading "Waves For Margie" features gentle harp textures and vocals from Radha Botofasina. The album ends with a reprise of it’s centerpiece "Surya Meditation", in a shortened and powerful edit that comes accompanied by the potent spoken reminiscences of Swamini Satsang. It’s return marks the closing of an extraordinary musical circle whose singular blend of improvisatory and devotional music defies easy categorization. The warmly reflective solo synth piece for Meghan Jahnavi* was added with the intention to promote mental health and wellness initiatives. “That is specifically what Dew Sophie's and Meghan's pieces are composed for,” Surya reflects. “Their imperative nature and importance to me cannot be overstated. I, and we, are in a place where uplifting our spirits to wellness is the most crucial part of many aspects of human existence.”

Dedicated to the formative influences in Surya Botofasina’s life; his mother, grandmother and Alice Coltrane, his debut album is imbued with a wide-eyed sense of discovery. He explains: “Each piece feels like an inaugural experience in the most spiritually youthful way. Many musicians have many albums - but there is only one first. The Divine energy of a new life is within every second of the music.”