Newly Discovered Never-Before-Heard Bobby Darin on “Go Ahead and Back Up: The Lost Motown Masters” 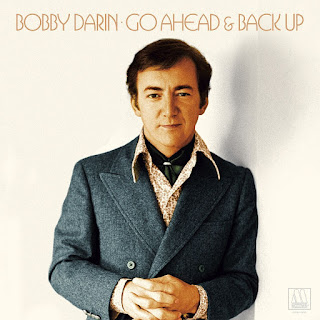 Bobby Darin joined Motown Records in 1970, inaugurating the final phase in a remarkable career that saw him transform from a rock-and-roll teen idol to a sophisticated swinger to a socially conscious folkie.  Yet before his tragic death at the age of 37 in 1973, Darin only released one album and a handful of singles for Berry Gordy’s legendary label.  A few posthumous recordings followed in 1974 and a live album in 1987, but the story stayed the same: that despite the best efforts of all, Darin’s music for Motown never lived up to the great potential of the pairing.  Now, more than 45 years after the artist’s passing, the truth can be revealed.

Real Gone Music and Second Disc Records’ Go Ahead & Back Up: The Lost Motown Masters lifts the curtain on the final years of Bobby Darin’s life with 24 never-before-released recordings directly from the Motown vaults, their existence largely unknown to even Darin’s most ardent collectors and biographers.  Due on July 13, this years-in-the-making project (the landmark 25th release for Second Disc Records) premieres a lost album produced by Bobby in the raw, stripped-down style of his stage shows of the period; a return to standards as only Bobby could have recorded; and an entire album’s worth of stunning, surprising tracks written and produced by Motown’s cream of the crop.

Go Ahead & Back Up features newly-discovered, never-before-heard songs and productions by a Motown “Who’s Who” of Smokey Robinson (who shares the microphone on “Cindy”), Nickolas Ashford and Valerie Simpson, The Corporation (Berry Gordy, Fonce Mizell, Freddie Perren and Deke Richards), Jerry Marcellino and Mel Larson, and Mike Randall.  The funky, soulful, and altogether exciting recordings on Go Ahead and Back Up finally give listeners a taste of where Bobby Darin might have been headed next.

This ultimate collectors’ edition has been co-produced and annotated by Joe Marchese (Bobby Darin’s Another Song on My Mind: The Motown Years) and Andrew Skurow (Diana Ross and The Supremes’ Expanded Editions), while acclaimed engineer Kevin Reeves has mixed and mastered from the pristine original Motown tapes.  A lavish 28-page booklet designed in impeccable period style by John Sellards includes comprehensive liner notes (drawing on exclusive quotes from Smokey Robinson, Valerie Simpson, and Jerry Marcellino) and rare, never-before-published photos of the superstar artist.

Thought you knew everything about Bobby Darin and The Motown Sound?  Go Ahead & Back Up!  This isn’t your mother’s Bobby Darin.  These long-lost recordings will hit stores from Second Disc Records and Real Gone Music on July 13.

Bobby Darin, Go Ahead & Back Up: The Lost Motown Masters

Go Ahead and Back Up
(Your Love Keeps Lifting Me) Higher and Higher
Help Me Make It Through the Night
Watch the River Flow
Lady Madonna
I Walk the Line
You’ve Lost That Lovin’ Feeling
I Don’t Know How to Love Her
Catch the Wind
We’re Getting There
Stray Dog (Oh Let Her Be)
Child of Tears
I Think the Devil Must Be Beating His Wife
Cindy (featuring Smokey Robinson)
I’m Glad About It
Oh Lord, Where Is My Baby
Young Joe Caldwell (a.k.a. Lucky Day)
The Letter (Extended Version)
Proud Mary (Version 1)
Proud Mary (Version 2)
Rags to Riches
Mona Lisa
Smile
Melodie (The Symphony Mix)