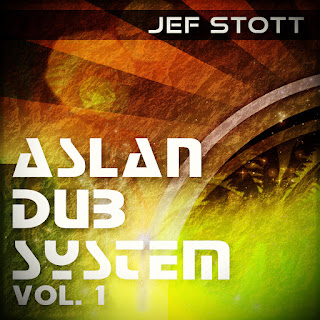 Bay Area producer, composer, multi-instrumentalist, documentary filmmaker, and music educator Jef Stott returns with his first album release in five years. Stott who has released three critically acclaimed albums on Six Degrees Records and over 10 albums in his long career is back in a major musical way with an exciting new project, Aslan Dub System, that focuses on bass music heavily mixed with electro cumbia, Jamaican dub, and Balkan brass all held together with Stott’s signature global fusion foundation. Aslan Dub System Vol. 1 is due out on June 8th on Stott’s new record label Embarka Records and distributed worldwide through Six Degrees.

Aslan Dub System is the fruition of Stott’s life changes and personal growth over the past decade, which included his new teaching job at SF JAZZ, the launch of his video travel series World is Sound (http://worldissound.tv), and marrying into his new Turkish family, as well as his original SF recording studio closing down. Stott’s describes what happened to his project studio “All of my previous work had been written and recorded in my studio in San Francisco and that building was demolished in the ongoing wave of gentrification in S.F. So, my studio of over 10 years was shut down. I embraced the change and took a job in the Education Dept of SFJAZZ and built up an audio production classroom there and became well known as an educator.”

While prospering at his new role as a music educator, Stott also launched the World is Sound project, a video travel series about music. The series presents rich sonic cultures through interviews and performances with musical artists from exciting and vibrant destinations around the globe. The series, that Stott hosts, shoots, edits and produces, provides an engaging look at how performers in major urban settings create their musical art forms. Think of it as Anthony Bourdain, but about music. Stott has already traveled to Japan, Istanbul, New Orleans and Cuba for the project interviewing and jamming with people all over the world. Watch the series and find out more at http://worldissound.tv.

Stott’s inspiration from traveling didn’t stop there. His recent marriage to his Turkish wife whose family is based in Istanbul and the Aegean Coast added to his sonic and personal journey. He passionately states, “I have travelled there several times, which was a huge influence not only culturally, but socially. Being surrounded by such a large loving family had a positive effect on the moody lone wolf artist. Through my travels and my new family overseas, I experienced first-hand how music is the fabric of life, weaving society together, music and community is life. So, I wanted to start creating something that added to that feeling, something collaborative, celebratory and communal.”

The result of these experiences are projected in Aslan Dub System Vol. 1. Stott describes, “I found a renewed passion to create more music with a positive outward looking sound. I am much more interested now in connecting with people globally thru music instead of looking more inward as a studio artist. The sound that is coming out of this new project is sunny, positive and inclusive. I feel more than ever that music is a key to understanding and compassion and we really need that in the world now. I am committed more than ever to bring a positive global vibe to my fans and new audiences.” The project is also debuting on Stott’s new imprint Embarka Records, which will release Stott’s music and the artists he collaborates through the World is Sound project all with an emphasis on global bass music from around the world.

The debut EP Aslan Dub System Vol. 1 is aptly titled as “Aslan” means “Lion” in Turkish and “dub system” is a nod to Jamaican sound system culture. On the five diverse bass music tracks on Aslan Dub System Vol 1.  Stott enlists a talented cast of musicians who join him including Will Magid on trumpet, best known for his work as Balkan Bump signed to Gramatik’s Lowtemp label, Morgan Nilsen on clarinet from La Misa Negra, Inspector Gadje, and Latin American percussionist Vincent de Jesus. Each track has its own unique style, whether it’s the Balkan bass tunes of “Balkan Beach” or “Jelem Cantina” to the old school drum & bass roller “Ready For This” to the electro cumbia dub of “Soñar (to dream)” or the Burning Man festival inspired opener “Yemaya.”

Stott concludes, “I’m excited and grateful to be releasing this music. I hope to continue growing as an artist through these collaborations, using my resources to help other artists release their work on the new Embarka Label and to continue traveling and connecting with people through the World is Sound video series and through more Aslan based musical projects and collaborations. We as artists and citizens need to keep seeking to come together, to find common ground and shared experiences. Pulling back into our safe zones of nationalism is not the way forward. Music is the unifier and the way forward.”