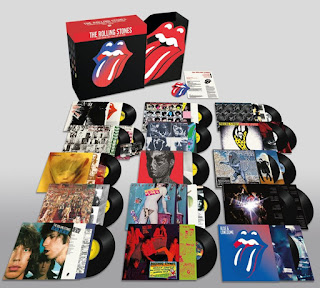 Whenever The Rolling Stones do anything, they do it with quality and gravitas. Having defined rock'n'roll in the '60s, The Rolling Stones entered their imperial phase in 1971 with Sticky Fingers. What followed is a run of albums that couldn't have happened at any other time, by any other band: the decadent excess of Exile On Main St, the Jamaican voodoo swamp of Goats Head Soup, the disco and punk-infused prowl of Some Girls. With each new decade, the Stones evolved while staying true to their roots, coming full circle in 2016 with Blue & Lonesome, a love letter to their first inspiration: the blues. Today, The Rolling Stones and UMe announce 'The Studio Albums Vinyl Collection 1971-2016,' a brand new limited edition vinyl box set collection, featuring 15 albums across 20 LPs released on June 15 2018.

'The Studio Albums Vinyl Collection 1971-2016' presents this monumental era in rock'n'roll history in a highly bespoke, lenticular mounted, limited edition box-set housing the 15 studio albums from Sticky Fingers through to Blue & Lonesome in faithful and intricate original packaging replications. Every album has been lovingly remastered and cut at revelatory half-speed at Abbey Road Studios, from vinyl specific original tape transfers designed to get the very best possibly sound from the format. Each album is pressed on heavyweight 180-gram black vinyl and includes a download card for HD digital redemption of the catalog and includes a numbered certificate of authentication.

Cut at half speed, these are among the highest quality vinyl pressings that these classic
Rolling Stones albums will have ever received. Half speed mastering and pressed to a very high standard ensures top notch sound quality for the listener.

Special care has been taken to create packaging to the same high standards, with detailed artwork reproduction for each album including Some Girls, which comes housed in the replica design including 20 cut-outs on the cover, while the sleeve of Sticky Fingers is presented as Andy Warhol's original design, complete with a working zip with a hidden image underneath and Exile On Main St comes with a set of 12 original postcard inserts.

ABOUT THE PROCESS
Abbey Road Studios' engineers have been cutting grooves into discs since the studios first opened in 1931. In 2013, award-winning engineer Miles Showell joined their existing mastering team, bringing a wealth of disc-cutting experience with him.

One of the artisan techniques offered by Abbey Road Studios that results in the very highest quality sound reproduction is Half Speed Cutting. This process involves the master source being played back at precisely half its recorded speed while the cutting lathe is similarly turned at half the desired playback speed. This allows the cutting head twice the time to cut the intricate groove, allowing considerably more accuracy with important matters such as frequency extremes and micro-dynamic contrasts. The resulting cuts have excellent high frequency response (treble) and very solid and stable stereo images.

It's not quite as simple as running everything at half rate. There is an EQ curve applied to all vinyl records and by running the lathe at half speed, all the frequencies are wrong. However, the technical staff at Abbey Road Studios have had new custom-built filters installed which allow Miles to practice half speed cutting to the full on a modified Neumann VMS-80 lathe.

It's Only Rock'n'Roll
If You Can't Rock Me, Ain't Too Proud To Beg, It's Only Rock'n'Roll (But I Like It), Till The Next Goodbye, Time Waits For No One, Luxury, Dance Little Sister, If You Really Want To Be My Friend, Short And Curlies, Fingerprint File

Some Girls
Miss You, When The Whip Comes Down, Just My Imagination (Running Away With Me), Some Girls, Lies, Far Away Eyes, Respectable, Before They Make Me Run, Beast Of Burden, Shattered

Emotional Rescue
Dance, Summer Romance, Send It To Me, Let Me Go, Indian Girl, Where The Boys Go, Down In The Hole, Emotional Rescue, She's So Cold, All About You

Tattoo You
Start Me Up, Hang Fire, Slave, Little T&A, Black Limousine, Neighbours, Worried About You, Tops, Heaven, Not Used To Crying, Waiting On A Friend

Undercover
Undercover Of The Night, She Was Hot, Tie You Up (The Pain Of Love), Wanna Hold You, Feel On Baby, Too Much Blood, Pretty Beat Up, Too Tough, All The Way Down, It Must Be Hell

Dirty Work
One Hit (To The Body), Fight, Harlem Shuffle, Hold Back, Too Rude, Winning Ugly, Back To Zero, Dirty Work, Had It With You, Sleep Tonight, Key To The Highway

Voodoo Lounge
Love Is Strong, You Got Me Rocking, Sparks Will Fly, The Worst, New Faces, Moon Is Up, Out Of Tears, I Go Wild, Brand New Car, Sweethearts Together, Suck On The Jugular, Blinded By Rainbows, Baby Break It Down, Thru And Thru

Bridges To Babylon
Flip The Switch, Anybody Seen My Baby?, Low Down, Already Over Me, Gunface, You Don't Have To Mean It, Out Of Control, Saint Of Me, Might As Well Get Juiced, Always Suffering, Too Tight, Thief In The Night, How Can I Stop

A Bigger Bang
Rough Justice, Let Me Down Slow, It Won't Take Long, Rain Fall Down, Streets Of Love, Back Of My Hand, She Saw Me Coming, Biggest Mistake, This Place Is Empty, Oh No Not You Again, Dangerous Beauty, Laugh I Nearly Died, Sweet Neo Can, Look What The Cat Dragged In, Driving Too Fast, Infamy

Blue & Lonesome
Just Your Fool, Commit A Crime, Blue And Lonesome, All Of Your Love, I Gotta Go, Everybody Knows About My Good Thing, Ride 'Em On Down, Hate To See You Go, Hoo Doo Blues, Little Rain, Just Like I Treat You, I Can't Quit You Baby
Posted by Jazz Chill at 3:35 PM