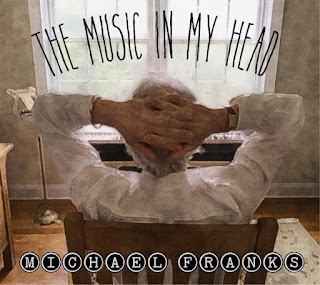 "'The Music In My Head' is my eighteenth studio album of original songs. I still think of these releases as albums and I write and sequence them with that same old-school idea of continuity in mind. On this project, I enjoyed writing and recording every note...from making the demos to working in the studio with so many of my former accomplices and some great new ones. When I started writing the compositions I shut myself up in my little studio room and got lost in the music, fueled by: tea, more tea, vegan lasagna, and punctuated by walking the dogs and deep water cardio workouts." - MICHAEL FRANKS

"As Long As We're Both Together" features Chuck Loeb on guitars and keys, he also produced and arranged the track. Jimmy Haslip-bass, Eric Marienthal, sax, Manuel Quintana-percussion, Veronica Nunn and Leslie Ritter-background vocals

Celebrating 45 years as a recording artist since his highly collectible self-titled debut in 1973, singer/songwriter Michael Franks hovers dragonfly-like in a sacred space all his own within his contributions to the artform of music. Liberatingly non-categorizable, Franks is in possession of unique fan bases around the world across jazz, quiet storm, adult contemporary, pop, contemporary jazz, folk and even blues styles. His songs have been lovingly covered by a wide range of artists that includes Ringo Starr, Natalie Cole, The Carpenters, Sonny Terry & Brownie McGhee, Diana Krall, Lyle Lovett, Al Jarreau, Carmen McRae, The Manhattan Transfer and Patti LaBelle, to name only a few. And some of his most well-known compositions - lyrical marvels wedded to his laidback delivery of vocalizing, produced, arranged and cast with some of the finest musicians in jazz and session lore - range from ethereal ("The Lady Wants to Know") to sensual ("Tell Me All About It") to playful ("Popsicle Toes") to edgy ("The Camera Never Lies") to evocative ("Tiger in the Rain") to cinematic ("Nightmoves") to seasonal ("Christmas in Kyoto") to comforting ("Inside You") to outrageous ("Now That Your Joystick's Broke") to sublime ("Still Life") and beyond. What James Taylor, Joni Mitchell and Paul Simon have contributed to pop-rock music in terms of singer/songwriter excellence, Michael Franks has accomplished as their iconic equivalent in the realms of contemporary jazz and the quiet storm.

For his 18th album and first in seven years, Michael provides America and the world at large a cerebellum- massaging musical survival kit of 10 new songs...an audio travelogue that turns our attention to the wonders of Creation and Mother Nature strewn with bread crumbs that additionally lead us to lofty literature, works of art, love, divinity...and tea. Titled The Music In My Head, it is a snapshot of the artist in his autumnal here and now, lost up in the fruits of his quietly profound career success, his loving wife Claudia, seven cats and two dogs, the idyllic wooded environ in which he lives, and the blessing of still firing on all cylinders in his wondrous endeavors of expression. Joining Michael in the process are producer/arrangers Gil Goldstein, Scott Petito, Charles Blenzig and former Yellowjackets bassist Jimmy Haslip, along with stellar guest musicians such as guitarist David Spinozza, saxophonists Bob Mintzer, Eric Marienthal and Gary Meek and for the first-time pianist Rachel Z.  Franks' dear friend and guitarist Chuck Loeb (Fourplay) also appears on the album. The singer/songwriter shares, "The loss of my long-time producer and friend, Chuck Loeb, threw the project out of balance for a few months. I sent Chuck the first demo I made, a guitar/vocal/percussion sketch of "As Long As We're Both Together." At this point in time he was struggling bravely against the odds of his health issues. We spoke on the phone a few times, discussing which guitars he might use, and in a few days time he sent me a perfect arrangement with the amazing solos you hear on the record. It's hard to comprehend how, in a time of such physical adversity, he summoned the wherewithal to play at his blazing, signature best. I'll always treasure this last collaboration of ours. I'm grateful to my friends Jimmy Haslip, Eric Marienthal, and Scott Petito, along with percussionist Manuel Quintana, and vocalists Veronica Nunn and Leslie Ritter for helping me finish this song in the sad absence of our late friend Chuck."

The result of "As Long As We're Both Together" and the nine additional gems highlighted on The Music In My Head is a magnificent sonic telegraph of timeless anthems that transcend all boundaries and reach straight for the heart.