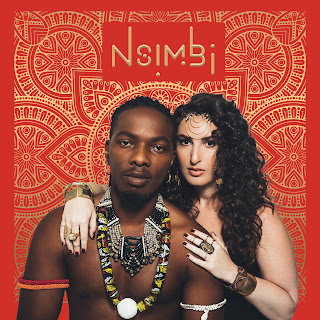 The day used to end the same way around the world. After the work was done, families and communities would gather around a fire. They would sing, dance, tell stories, distill learning into proverbs.

“The album was inspired by ancient Swahili proverbs, but it centers around African culture, more generally, the ancient insights it conveys,” Zamba explains. “We want to show people today how relevant that knowledge is. We want to promote that oneness this knowledge suggests.”

“The transition to modernity is a big theme on this album. We were looking for roots and we found them in Swahili proverbs,” Tamar agrees. “Every song is based on a proverb. They are the thread, but it all keeps coming back to our need for human connections to thrive.” These connections weave together sonically, via instruments from kalimba to kora, into tight, grooving songs.

These songs are a natural outgrowth of a musical partnership that began several years ago in Kampala, where Zamba and Tamar met. Tamar managed a recording studio, having left a position in the troubled northern part of the country at an NGO dedicated to peace education and recovery after years of devastating war. She had come to the Ugandan capital to focus on her music and began working for a label.

At the studio, she ran into Zamba, a legend on the burgeoning Ugandan hip hop scene who had racked up numerous awards, producing gigs, and brand sponsorships. The two connected, and when Zamba was looking for a singer for a government-supported track to raise HIV awareness, he called on Tamar. The song is credited with making a significant impact, Zamba notes. They went on to more collaborations, as part of Zamba’s hip hop label.

“I was singing more pop and hip hop,” Tamar recalls. “I didn’t really have a strong idea about my voice or message at that point, but I knew I wanted to be singing and writing. I was experimenting and figuring out what I needed to do that felt closer to my own vision.” Then, after five years in Uganda, events drew Tamar back to the States. In the year she spent alone in the US, she found her voice, writing and recording a solo EP, Firedance. The EP debuted in the top five of the iTunes world chart, garnering strong reviews and significant YouTube views.

When Zamba came and joined her in America, he began to explore new ideas. Though he had collaborated with traditional and acoustic musicians in Uganda, his focus and his claim to fame were his accomplishments as a hip hop MC. Known as a “ghetto storyteller” for his frank portrayals of life in Kampala, “I grew up listening to American MCs like Nas and to rappers from South Africa and elsewhere. I had fun as a young man just doing hip hop, but it wasn’t my only center. I was all over the place; I would preach on the record but it never felt whole.” Zamba, too, began to search for a different way to raise his voice.

The romantic ties that bound Zamba and Tamar inevitably blossomed into musical collaboration, as both found a deeper calling as artists. “This album was an opportunity to mature and evolve and promote the things we both believe in,” says Zamba. “We love culture, and we want to encourage international collaboration across cultures.”

They hit upon Swahili proverbs as conceptual anchors, bringing their broad musical loves and diverse experiences together. “There is so much in these proverbs, some of which I first encountered when I studied Swahili in college and in Tanzania,” Tamar notes. “We’d talk about them, and then Zamba would find similar ideas in Baganda culture.” “Leo ni Leo,” for example, reminds listeners that all we have is today, but today is more than enough to find joy. “Dunia ni Matembezi” advises listeners to leave their familiar surroundings and discover the world, literally stating that “the world is walking,” getting out there, seeing new things.

The evocative proverbs were just the beginning. “After we’d thought about the proverb, we’d come up with stories that we could tie together from our two perspectives and experiences, and I’d develop the melody,” recalls Tamar. “We ended up singing in English, Luganda, Lingala, and Swahili.” The linguistic range was enhanced by the duo’s collaborators, US-based Ugandan multi-instrumentalist Kinobe and Congolese-born soukous guitarist and singer Jaja Bashengezi, whose musical imprint on tracks like the party-read “Sokota” proved crucial to the album.

Nsimbi has diverse origins but the tracks share a sonic integrity, a sunny acoustic sound and a mesmerizing rhythmic intensity. Within the overarching feel, the contributors’ various styles glimmer through: Tamar’s singer-songwriter instincts (“Gonna Be Alright”), Zamba’s hip hop roots (“Flower of the Heart”), Bashengezi’s red-hot soukous licks, and Kinobe’s expressive kora (“Forsaken,” which addresses the plight of refugees in East Africa and worldwide). Zamba and Tamar’s musical impulses sometimes lead to different understandings of a shared concept, as in “Omugga,” dedicated to the swaying current of a river. Tamar heard the pulse in one way, Zamba another. “You can watch us dancing to these different beats on stage,” laughs Tamar. “But it all came together, even though our sense of a river’s rhythm were so different.”

The differences and variations are part of the point. “We have very different approaches to writing,” reflects Tamar, “and the pace we worked at was scary, but rewarding.” “One thing we both love and agree on, we love music that helps society,” Zamba adds. “We don’t mean this in some corny way; it’s not a trite thing. We honestly believe in music’s positive power in the world.”
Posted by Jazz Chill at 4:07 PM