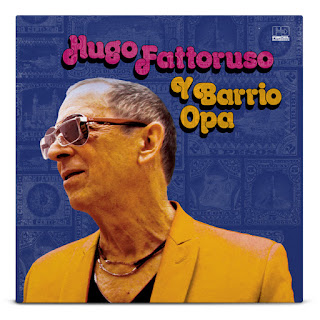 Far Out Recordings has announced the new album from Uruguayan funk, jazz and candombe legend Hugo Fattoruso! After a twenty-year search for the man behind the cult 70s jazz-funk group Opa, we are honoured to present Hugo Fattoruso Y Barrio Opa: a new work from Fattoruso and his team of world-class musicians, including the sensational Candombe drumming of the renowned Silva brothers. Recorded at Sondor Studios, Montevideo, the album is the natural development of the original Opa sound, fusing Afro-Uruguayan rhythms, jazz harmony and heavy funk attitude, under Hugo’s unique musical vision.

Born in the Uruguayan capital of Montevideo in 1943, composer, arranger and multi-instrumentalist Hugo Fattoruso has had a profound influence on every aspect of Latin American musical culture. From early beginnings, playing in his family band at street festivals around Uruguay, to fronting Los Shakers: South America’s answer to the Beatles, and one of the most successful rock and roll groups from the continent. At the end of the sixties Fattoruso was looking to broaden his musical horizons, and in 1969 he moved to New York where he formed Opa and went on to rub shoulders with the likes of Ron Carter and Creed Taylor.

Fusing Candombe with rock, jazz, funk and other Latin American rhythms, Opa created a distinctive Afro-Uruguayan voice within the global jazz vernacular, influencing a generation of musicians throughout the seventies and beyond. During the eighties Fattoruso moved to Brazil, where he continued to work and record with Brazilian artists including Milton Nascimento, with whom he composed the World Music Grammy winning Nascimento album in 1997. Fattoruso also famously collaborated extensively with Airto Moreira, arranging and playing on a plethora of hit records including Fingers and I’m Fine, How Are You. More recently Fattoruso’s music has been sampled by the likes Flying Lotus and Madlib.

With such a prolific career, Fattoruso’s relative obscurity seems odd. Uruguay is dwarfed on either side by Brazil and Argentina, and while geography may have something to do with it, Hugo’s own elusiveness may also explain why someone so influential has been hitherto, so underappreciated. A deeply humble figure, never settling for too long in any one place, Hugo has dedicated his life to music and little else. It has taken twenty years for Far Out to track down the man behind Golden Wings and Magic Time, and it wasn’t until label boss Joe Davis met a Uruguayan producer (over one too many artisanal beers) at a world music conference in Budapest, that he finally made contact with one of his musical idols.

Following a few internet meetings and some very long impassioned conversations about Hugo’s life, music and mutual musical friends in Brazil, Hugo began writing the new album, and Joe booked a seat on the next flight to Montevideo. Recorded at the state of the art Sondor Studios in Montevideo’s iconic Barrio Sur district, the album features some of the world class musicians at the forefront of today’s Uruguayan jazz scene, including Hugo’s son Francisco Fattoruso on bass, Tato Bolognini on drums, Albana Barrocas on percussion and Nicolás Ibarburu on electric guitar. The album also features the Candombe drumming of the legendary Silva brothers, Mathías, Guillermo Diaz and Wellington, who give the album its Afro-Uruguayan identity, transporting the listener to Barrio Sur, the spiritual home of Montevideo’s Candombe heritage.